The avalanche, which may have ties to the drought in the West, launched a plume of water and created a massive wave in its wake.
By Zachary Rosenthal June 3, 2022
Facebook
Twitter
Linkedin
Email 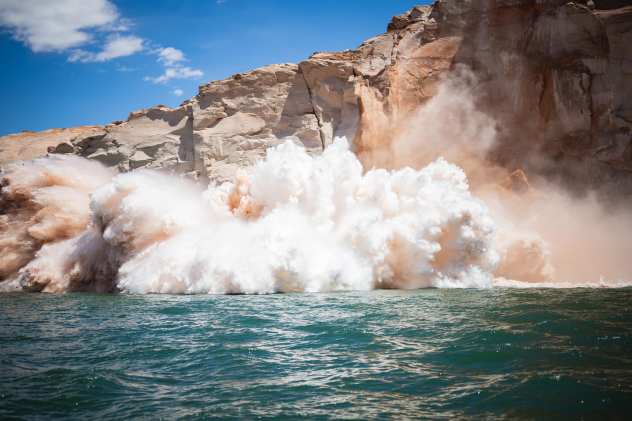 After noticing loose rock falling from the cliffs of Lake Powell, Jeff Carter took out his camera and captured a stunning series of photos of a large rockslide. (Jeff Carter)

Tourists on Lake Powell on Memorial Day witnessed something truly memorable: a massive chunk of red rocks on the side of the reservoir toppling over into the water, generating a wave powerful enough to capsize a small watercraft.

Mila Carter and her husband Steve were out boating on Lake Powell — a human-made reservoir on the Colorado River in Utah and Arizona — when the pair noticed the beginnings of the rockslide and began recording the collapse.

The video shows a large portion of the cliff — which was more exposed to the elements than usual due to a persistent drought that has brought the lake to its lowest water level ever — toppling into the water, creating an explosion-like plume of dust and a massive wave of water that rushed out from the impact site.

Mila, who lives Thatcher, Arizona, with her husband, told 2News her husband sped their boat away from the wave once the rocks fell into the water.

“[The wave was big] enough that it would have just swallowed our boat and swallowed jet skiers or kayakers or anything in its way,” Mila said. “After we were out of the way, we just kind of stopped and watched and made sure we hadn’t seen anything tragic.”

No one was injured by the rockfall or the wave, which Mila says was even more impressive than the video shows.

“I feel like the video didn’t do that big tidal wave justice,” Carter told Fox 13 Utah. “It was just — it was huge and so I’m grateful we were out of the way.”

Local geologists told 2News that rockslides are not uncommon in and around Lake Powell, though it is definitely rare to capture such a good video of the phenomenon.

“Rockfall is a natural canyon widening process,” said Tyler Knudsen, a senior geologist with the Utah Geological Survey. “A rockfall this size, you know it may be a once-a-year type event. We know there have been even larger rockfalls that have happened in Glen Canyon so I would say this is kind of a medium-sized rockfall.”

Another geologist told Arizona’s Family that the rockslide may be connected to the ongoing megadrought that has caused record-low water levels at Lake Powell.

“The saturation, and then drying with the falling water levels kind of contributed to that thing falling over,” said Joseph Cook, a geologist with the Arizona Geological Survey. “It might have fallen over anyway, but having a reservoir there may have sped up the process.”

The increasingly low water levels have exposed many things in Lake Powell, which was created by the federal government in 1963, over the years, including an old, long-lost shipwreck. In not-too-far-away Lake Mead, which is also seeing some of its lowest water levels on record, the low water levels unearthed the body of a murder victim from the late 1970s or early 1980s.