The Russian space agency said that "the launch of the Progress MS-20 cargo ship will be dedicated to the Donbass".
By Joseph Golder June 3, 2022
Facebook
Twitter
Linkedin
Email 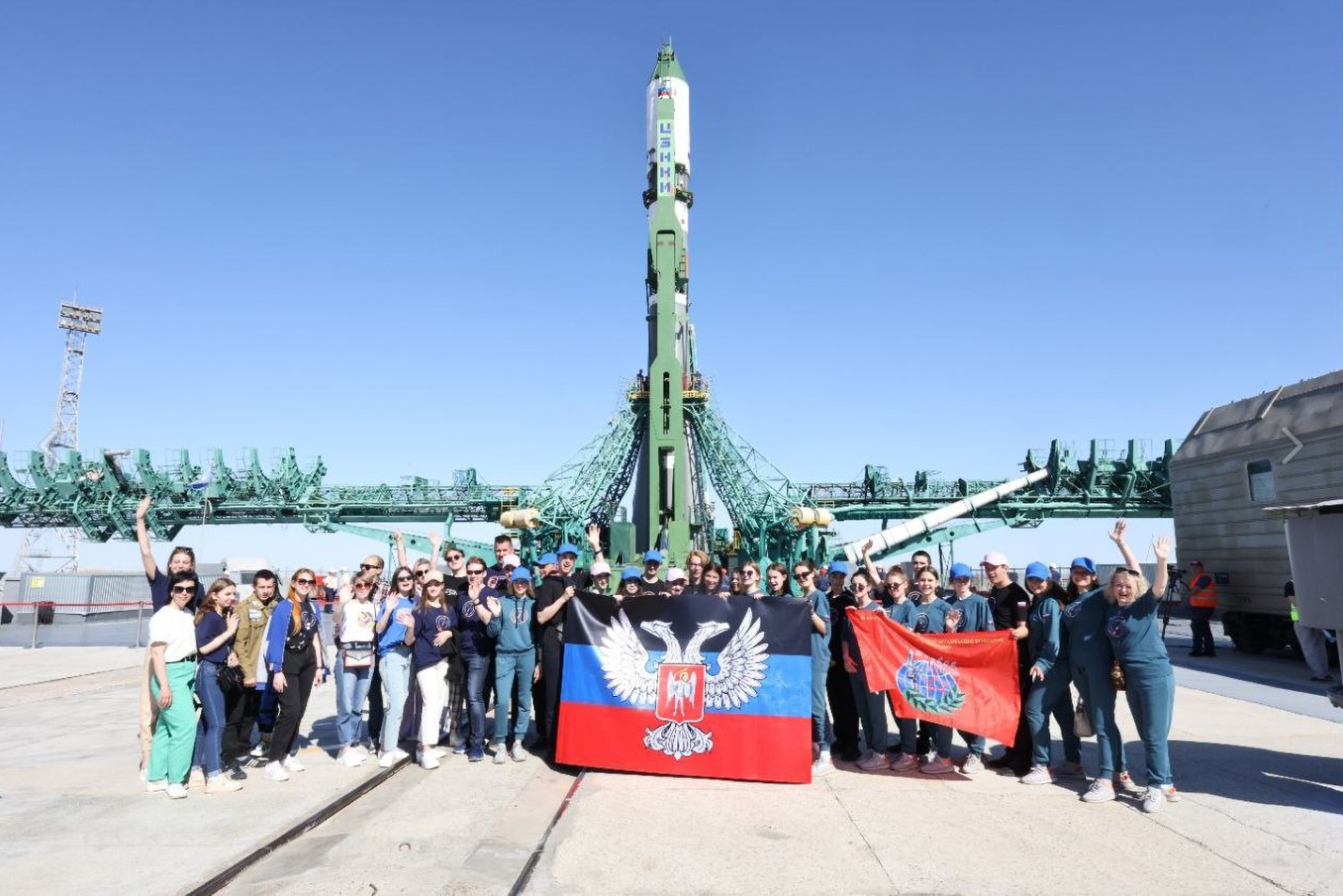 Donbass rocket with flags of republics DPR and LPR was installed on the launch pad of Baikonur, scheduled for June 3. (Roscosmos/Zenger).

These images show a space rocket bearing flags of the separatist Luhansk and Donetsk People’s Republics at Russia’s famous Baikonur launchpad before it takes off for the International Space Station.

The Russian space agency Roscosmos said in a statement: “The final pre-launch operations with the Donbass launch vehicle, the launch of which is scheduled for June 3, 2022 at 12:32 Moscow time, are underway at the Baikonur Cosmodrome.”

It added that the rocket was “installed in a vertical position and the maintenance columns at the launch complex were brought together” before “specialists from subsidiaries of the Roscosmos State Corporation began work according to the schedule of the first launch day”.

The Russian space agency said that “the launch of the Progress MS-20 cargo ship will be dedicated to the Donbass”.

It added: “In this regard, the second stage of the Soyuz-2.1a launch vehicle has the inscription ‘Donbass’, and the flags of the Donetsk and Luhansk People’s Republics on the head fairing. Children from the DPR and LPR, who will also be present at the rocket launch, also watched the removal today.”

The Russian space agency said that the Soyuz capsule is set to deliver 2.5 metric tons (5.5 standard tons) of cargo to the International Space Station (ISS), including fuel, equipment, medical equipment, clothing, and food for the crew.

The Baikonur Cosmodrome is a spaceport in an area of southern Kazakhstan leased to Russia.

The Donetsk and Luhansk People’s Republics are breakaway states in eastern Ukraine, recognized by Moscow.

They are not recognized by the vast majority of the international community. Intense fighting is taking place in eastern Ukraine over the regions.

The Russian Ministry of Defense (MoD) said in a statement on Wednesday, June 1 at 6 a.m., that the Yars mobile missile systems, which can carry nuclear warheads and which boast a reported range of over 10,000 kilometers (6,200 miles), were performing “intensive maneuvering operations on combat patrol routes in the Ivanovo Region”.

The move comes after President Joe Biden said that the US will send Kyiv more advanced rocket systems that will help to strike enemy forces from a longer distance.

Russian President Vladimir Putin said on February 25, one day after the invasion of Ukraine began: “Whoever tries to interfere with us, and even more so, to create threats for our country, for our people, should know that Russia’s response will be immediate and will lead you to such consequences that you have never experienced in your history.

The United Nations Secretary-General Antonio Guterres said on April 14: “The prospect of nuclear conflict, once unthinkable, is now back within the realm of possibility.”

Despite setbacks in eastern Ukraine, Ukrainian troops have made advances in Kherson in the south, and around Kharkiv in the northeast.