The images were obtained from the Russian Ministry of Defense (MoD).
By Joseph Golder June 3, 2022
Facebook
Twitter
Linkedin
Email 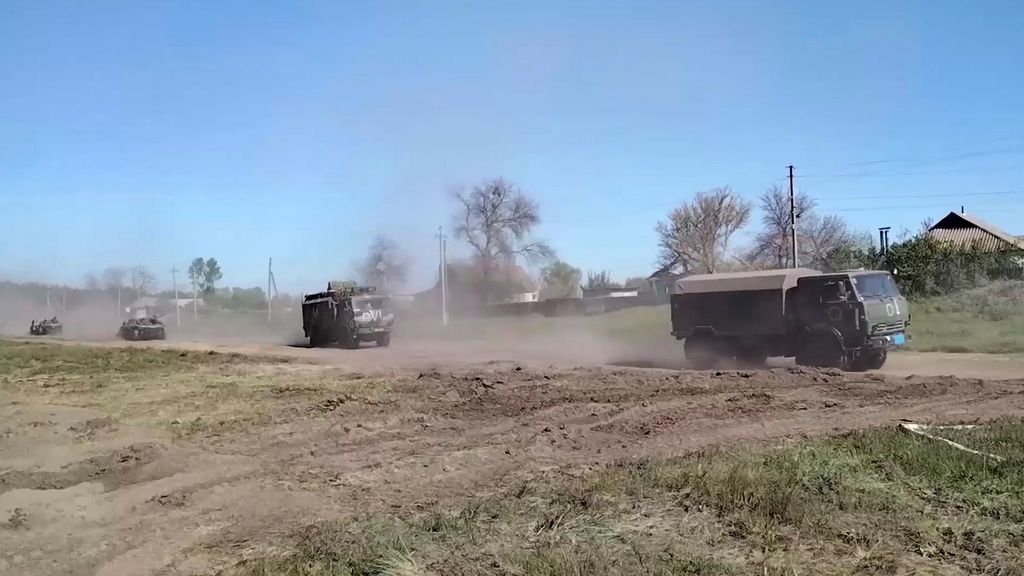 Advancement of units of the Airborne Troops during the offensive. (Ministry of Defense of Russia/Zenger)

Russia has released images that purport to show airborne troops advancing in Ukraine during its ongoing invasion of the country.

The images were obtained from the Russian Ministry of Defense (MoD), which said that the images are “footage of the advancement of units of the Airborne Troops during the offensive.”

The images show various military vehicles, including tanks and armored personnel carriers, as well as artillery units, some of them sporting the letter ‘V’ daubed in white paint, driving along dirt roads.

The ‘V’, and to a greater extent the ‘Z’, have become symbols of the war in Ukraine, with numerous military vehicles seen sporting them. The ‘Z’ has become a symbol used by those who support the Russian operation in Ukraine.

Other military vehicles can be seen standing guard by the side of the dirt track. It is currently unclear where the images were filmed and they have not been independently verified, but combat is raging in eastern Ukraine over the Donbas region.

Ukrainian President Volodymyr Zelenskyy has called Russian strikes on a nitric acid tank in the besieged eastern city of Sievierodonetsk “madness”. Residents of Sievierodonetsk have been warned to remain in bomb shelters and to prepare masks to protect against toxic fumes as the fighting intensifies.

The Russian Ministry of Defense (MoD) said in a statement on Wednesday, June 1 at 6 a.m., that the Yars mobile missile systems, which can carry nuclear warheads and which boast a reported range of over 10,000 kilometers (6,200 miles), were performing “intensive maneuvering operations on combat patrol routes in the Ivanovo Region”, east of the Russian capital Moscow.