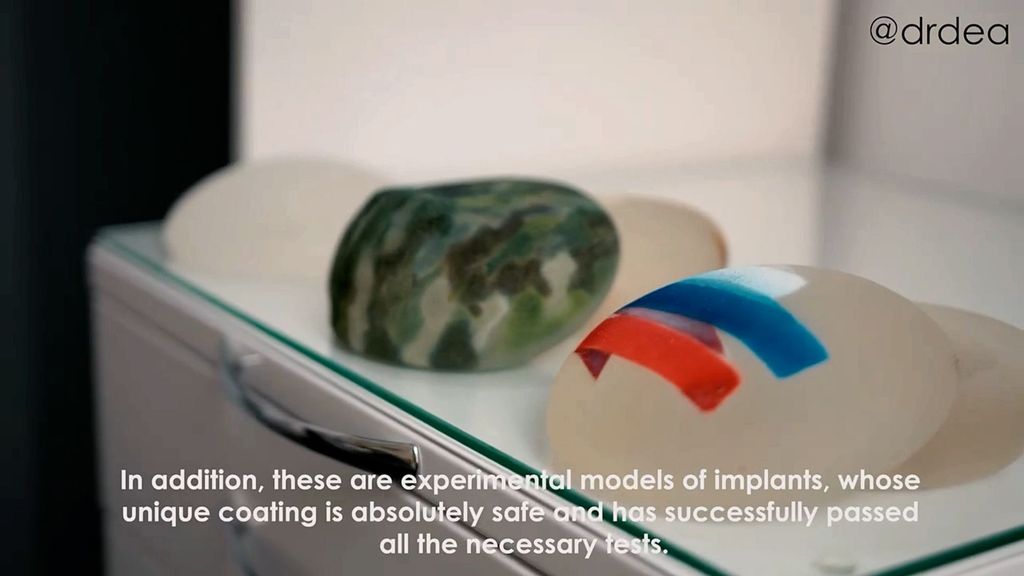 Evgeny Dobreikin, a plastic surgeon from Moscow, Russia, shows the new patriotic breast implants that are designed specifically for women who want to carry patriotic symbols right next to their hearts. (@drdea/Zenger).

A Moscow cosmetic surgeon has created patriotic red, white, and blue breast implants so Russian women can keep the national flag close to their hearts.

One of the silicone implants – seen in these photos – is based on the Russian tricolor flag.

Another displays a camouflage design, apparently a reference to the Russian invasion of Ukraine.

Alekseevich said (in Russian): “There are symbols that are important for every Russian, they are our reason for pride.

“We have developed a line of experimental implants for those who want to wear these symbols right next to their hearts and be proud of their Motherland.

“If we collect a sufficient number of responses, our technology can be implemented on a full scale in Russia, and later around the world.

“This very ‘world’ is now trying to ‘cancel’ us, but Russian culture cannot be canceled, because we, Russians, are artists and inventors, all connoisseurs of beauty in the world will follow our path.”

The surgeon added in a video: “Real patriots will be able to choose the model that is closer to their hearts, literally and figuratively.

“A stylish solution for those who love their Motherland and want something more than just a sticker on a car or a tattoo on their shoulder.”

A young woman who also appears in the video claims she has already had her breasts augmented with the flag implants.

She says: “‘Rosgrud’ will make me feel like a patriot, even if I don’t have clothes on.”

Russian troops invaded Ukraine on 24th February in what the Kremlin is still calling a “special military operation”. Today marks the 99th day of the campaign.

From 24th February to 2nd June, the total combat losses of Russian troops stood at around 30,850 personnel, according to the General Staff of the Armed Forces of Ukraine.

Ukrainian President Volodymyr Zelenskyy has called Russian strikes on a nitric acid tank in the besieged eastern city of Sievierodonetsk “madness”. Residents of Sievierodonetsk have been warned to remain in bomb shelters and to prepare masks to protect against toxic fumes as the fighting intensifies.

The Russian Ministry of Defence (MoD) said in a statement on Wednesday, 1st June at 6 AM, that the Yars mobile missile systems, which can carry nuclear warheads and which boast a reported range of over 10,000 kilometers (6,200 miles), were performing “intensive maneuvering operations on combat patrol routes in the Ivanovo Region”, east of the Russian capital Moscow.