The stone sculpture was discovered during conservation work in the Mayan city of Palenque, near the Usumacinta River.
By Joseph Golder June 3, 2022
Facebook
Twitter
Linkedin
Email 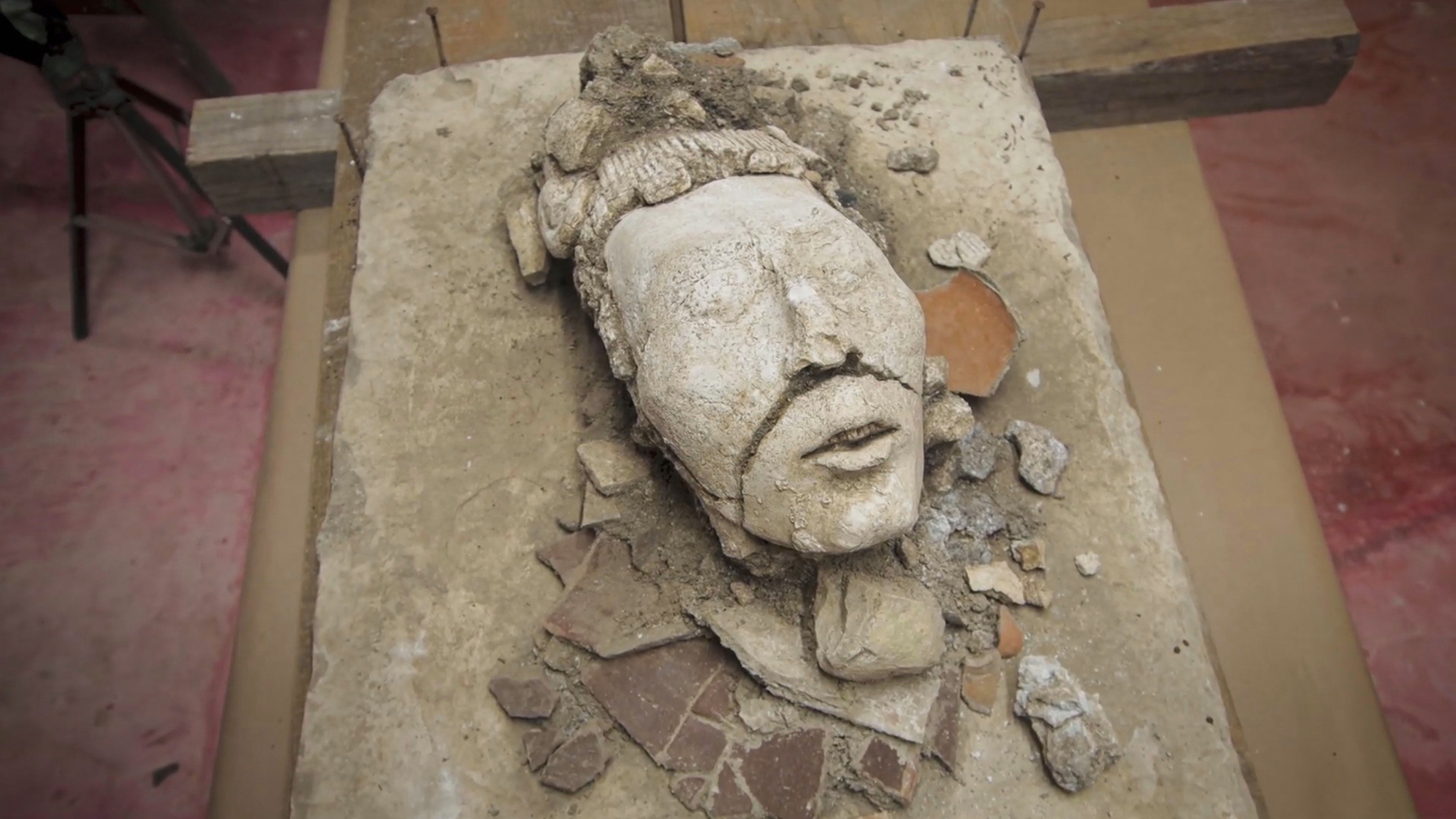 This Mayan corn god’s head has been unearthed by archaeologists in Mexico who found it at the bottom of a pond that was regarded by the ancients as symbolizing the entrance to the underworld.

The large, well-preserved head – dating back over 1,300 years – was placed there to signify an aquatic theme around the entrance to the world below.

The stone sculpture was discovered during conservation work in the Mayan city of Palenque, near the Usumacinta River in the southern Mexican state of Chiapas.

The find took place in July 2021 but has just been made public by Mexico’s National Institute of Anthropology and History (INAH).

Palenque was abandoned around the year 800 AD, with the area only being sparsely populated when the Spanish arrived in the 1520s.

Palenque, which is also known as ‘Lakamha’ in the Itza language (which means ‘Flat-Place-River’), is well known for its Mayan architecture and sculptures.

The INAH said in a statement released on Tuesday, May 31, that the archaeologists working on the site had discovered “a stuccoed head of the young god of corn” during the conservation work.

In Mayan culture, the maize god is known as Hun Hunahpu and was one of the most important deities because of his connection to the vital, staple crop.

The INAH said: “The sculpture is the axis of an offering that was placed on a pond, emulating the entrance of the deity to the underworld, in an aquatic environment.”

They added: “The interdisciplinary team that made up the initiative, co-directed by archaeologist Arnoldo Gonzalez Cruz and restorer Haydee Orea Magana, observed a careful alignment of stones while they removed the filling of a corridor that connects the rooms of House B of El Palacio with those of the adjacent House F.”

The god’s head was found inside “a semi-square receptacle formed by three walls and, under a layer of loose earth, the nose and half-open mouth of the divinity emerged.”

The experts said that the “ancient Maya of Palenque constantly revived the mythical passage” to the underworld with offerings.

Archaeologists Arnoldo Gonzalez Cruz, Carlos Varela Scherrer and Wenceslao Urbina Cruz, who also worked on the site, explained that the stuccoed head measured 45 cm (17 inches) in length and 16 cm (6 inches) in width, and 22 cm (8.6 inches) in height, adding that it maintained “an east-west orientation, which would symbolize the birth of the corn plant with the first rays of the sun.”

The INAH statement said that the statue has “graceful characteristics: the chin is sharp, pronounced and split; the lips are thin and project outwards, the lower one slightly down and showing the upper incisors.

“The cheekbones are fine and rounded; and the eyes, elongated and thin.

“Of the wide, long, flattened and rectangular forehead, other significant elements include the fragments of a tripod plate on which the sculpture was placed.”

The statement explained that the space where the statue was found was at some point closed off symbolically, by “breaking off a portion of the pond’s stucco floor and removing part of the construction filling, to deposit a series of elements: vegetables, animal bones quail, white turtle, white fish and domesticated dog, shells, crab claws, worked bone fragments, pieces of ceramic, three fractions of miniature anthropomorphic figurines, 120 pieces of obsidian blades, some green stone beads, two beads made of shell, as well as seeds and small snails.”

The cavity was then sealed with loose stones.

The discovery took place within the framework of the “Architectural Conservation and Decorative Finishes of El Palacio” project, which relied on resources from the “Ambassadors Fund of the Department of State to Cultural Preservation, sponsored by the Government of the United States.”