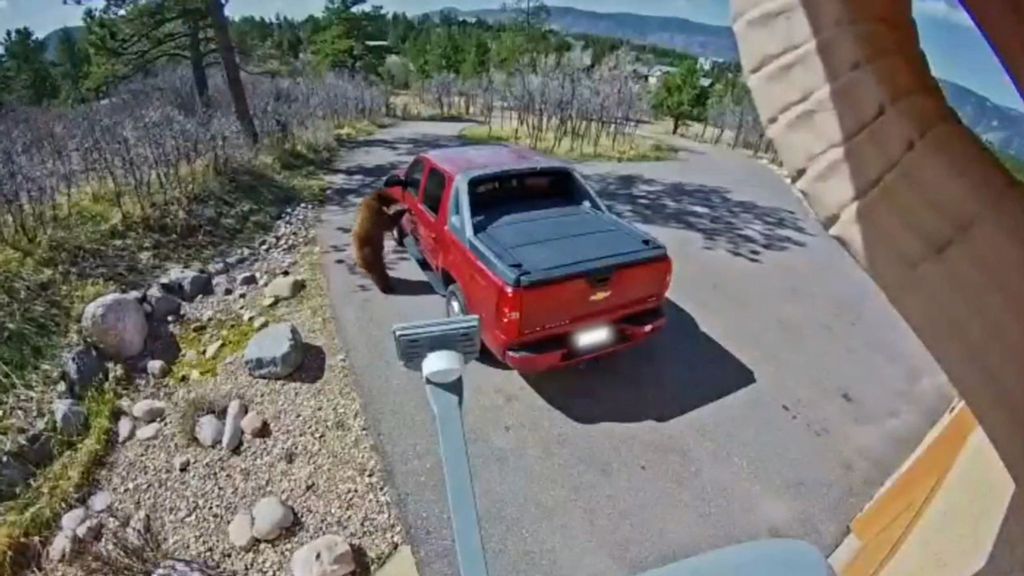 A hungry bear tried to break into a pickup truck using the door handle in a bizarre example of a bear-faced cheek.

CCTV footage of the attempt – recorded in Larkspur in Douglas County, Colorado – shows the bear ambling up to the parked vehicle.

After checking that no one is around, the furry felon gets up on its hind legs and pulls gently at the driver’s door handle.

When it realizes the truck is locked, the bear drops down on all fours again and casually saunters off back towards the woods.

Colorado Parks and Wildlife (CPW) shared the footage on social media on May 26, saying: “To keep a bear out of your car, lock your doors!

This smart homeowner did and their truck didn’t even get a scratch.”

CPW and the Douglas County Sheriff’s Office issued a reminder to citizens to always keep their vehicles and garages locked to prevent animals from breaking in.

In a statement on May 26, CPW said: “Property crime (burglary, theft and motor vehicle theft) has increased by eight percent.

“That combined with recent incidents of bears getting into cars or entering garages in search of food sparks this elementary reminder.

“In the town of Larkspur alone, CPW has already received reports of three vehicles being broken into by bears this spring and three other reports of bears entering open garages, as recent as May 22.”

CPW Wildlife Officer Sean Dodd explained: “Bears have an extremely keen sense of smell and excellent memories, and once they have learned about a reliable source of food, they will often return.

“Anything that carries a scent should be removed from your car. That includes small items like lip gloss or sunscreen, or food scraps hiding under your seats that maybe your children dropped.

“Both of these cases have already led to bears breaking into cars this spring in Larkspur.”

CPW added: “To keep a bear out of your car, you’ll first want to remove all attractants from vehicles.

“Make sure not to leave anything with a scent that might draw in a bear. Second, make sure to always keep your car doors locked and windows up.

“Bears are very intelligent animals and can open car doors as easily as a human can.

“This video from April 29 in Larkspur is an example of how a locked car door will keep a bear out.

“Bears that do enter often get trapped inside the car after the door closes behind them.

“If this goes unnoticed, it can lead to incredible damage to the vehicle and, ultimately, the bear’s death from the heat if in there long enough.

“Bears entering open garages is an annual problem. Open garage doors pose a risk of further habituating bears because they often find a food reward once inside. CPW is asking residents to close garage doors when not utilizing them.”