A new TikTok sensation turns out to be a random fish-and-chip shop in central England. Now it attracts hoards of clients.
By Simona Kitanovska June 2, 2022
Facebook
Twitter
Linkedin
Email 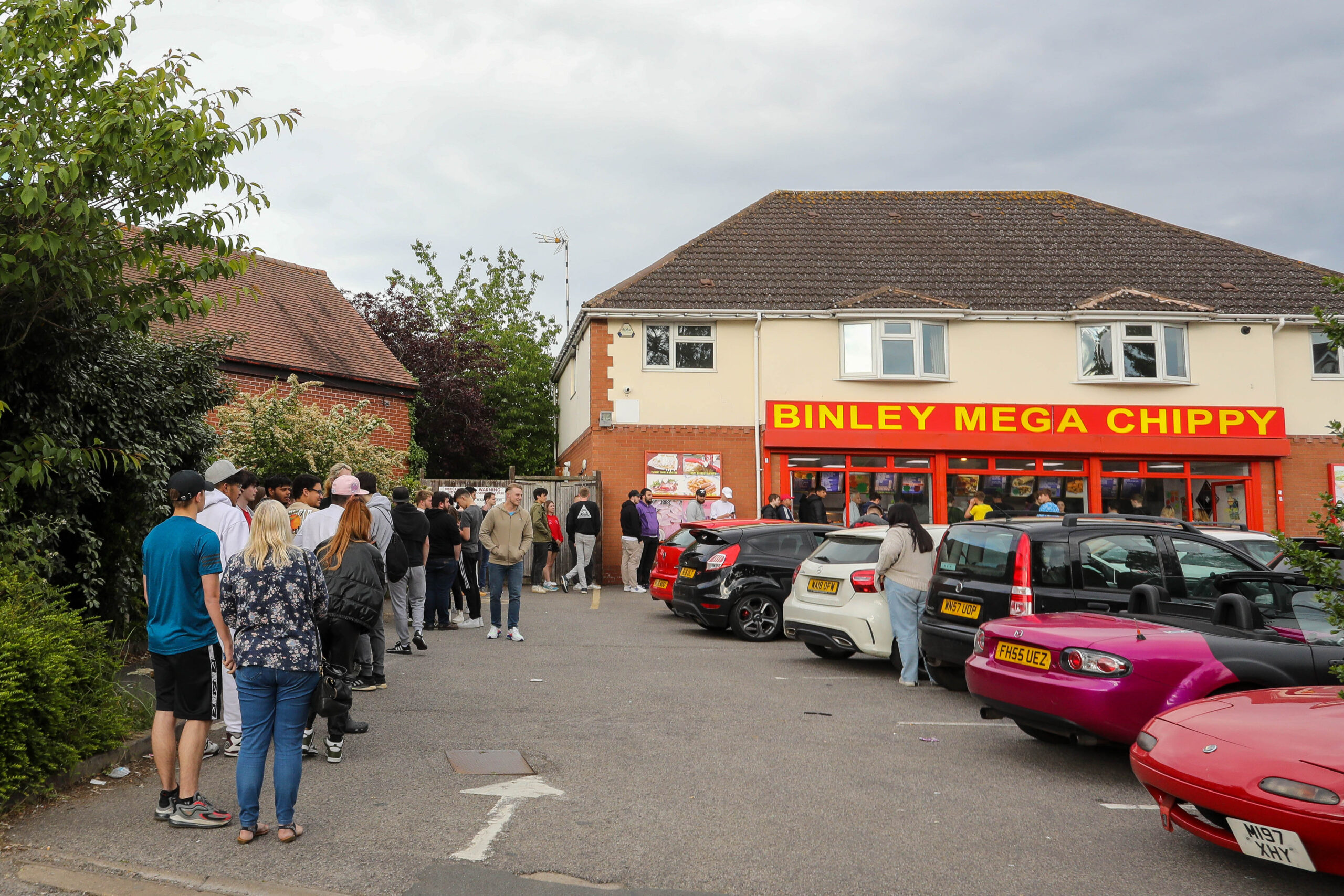 A random chip shop in Coventry has becomes an unlikely tourist destination attracting visitors from across the world after becoming a global TikTok sensation. (Anita Maric/Zenger)

A random fish-and-chip shop in central England has become an unlikely tourist destination, attracting visitors from across the world after becoming a global TikTok sensation.

Binley Mega Chippy in Coventry has been welcoming people from the United Kingdom and abroad since videos and memes featuring the business started going viral with millions of views.

Customers have been queuing out of the doors at the restaurant in the English Midlands for the last few days – leaving the chip shop staff and its owner completely baffled.

Some people have traveled from afar as Australia, Portugal, and France, while British visitors include those from Scotland, as well as Essex and Portsmouth in England.

The reason for the West Midlands “chippy” becoming world-famous in a matter of days remains unclear but seems to have been prompted by a catchy fan-made jingle.

Young people can now be seen outside the shop singing the theme tune as they wait in line to sample their 6 pound sterling ($7.55) for the Morbius Meal of fish, chips, and mushy peas.

Fencer Josh Perks, 18, made an eight-hour round trip from his home in Portsmouth with two pals after seeing the takeaway trending on TikTok.

He said: “We just thought it would be a laugh, we wanted to see what the fuss was about.

“It was great fun, there was a bit of a party atmosphere going on. I don’t think the staff there can get their heads around what is really going on.”

Student Ben Bradley, 19, of Coventry, added: “I met a bloke who had come over from France. Who comes from France to Coventry? Some lads from Scotland came too.

“It’s bonkers, but the most British thing ever. It certainly shows the power of social media. It’s like a festival around here.

“It has to be the most famous destination in Coventry right now and it’s just our local chip shop.”

Foodie influencer Mashtag Brady, 28, from Derby, said: “It was like traveling to Mecca; its like it has become a place of worship.

“I saw loads of other famous TikToker influencers there as well, it’s the place to be at the minute, everybody just wants to be part of the moment.

“There was even a guy outside offering free hair cuts, it’s become the place to promote other businesses too. It’s crazy.

“But in reality the place is just a bang-average chippy, but that’s what’s so funny about it.

“I had battered sausage, chips and curry sauce with a can of coke and it came to about 6.50 pounds ($8), so it was reasonably priced.

“I was beginning to wonder if it was all a big prank as I hadn’t actually seen any videos of people eating there.

“But when I got there, the queue was out of the door. It was rammed. They must be making a mint.

“Some of the lads said they had traveled three hours on three buses to get there. People are coming from all over.”

Bartender Jennifer Braley, 21, traveled from Leicester with friends Daisy Connor, 21, and Ben Groombridge, 24, and enjoyed a cheeseburger with chips.

She said: “Our whole TikTok is just filled with these Binley Chippy videos so we thought we’ve got to check this place out.

“You’d watch one video and scroll down and another would be there. We just love the theme song, it’s so funny.

“It was like a festival atmosphere outside, people were singing and playing the videos, it was crazy.

“It was actually a really fun experience and we’re glad we did it. I thought the food was really tasty too – I’d definitely come back.

“But we went just to say that we have. It was a good laugh”

The chippy started to gain the attention of millions when a TikTok food reviewer posted a slideshow of the UK’s best takeaways, naming Binley Mega Chippy first.

Since then, it has spawned numerous parody accounts, memes, comedy videos and has even featured on Harry Hill’s TV Burp.

First opened in 2004, the takeaway changed ownership eight months ago and is now run by Kamal Gandhi.