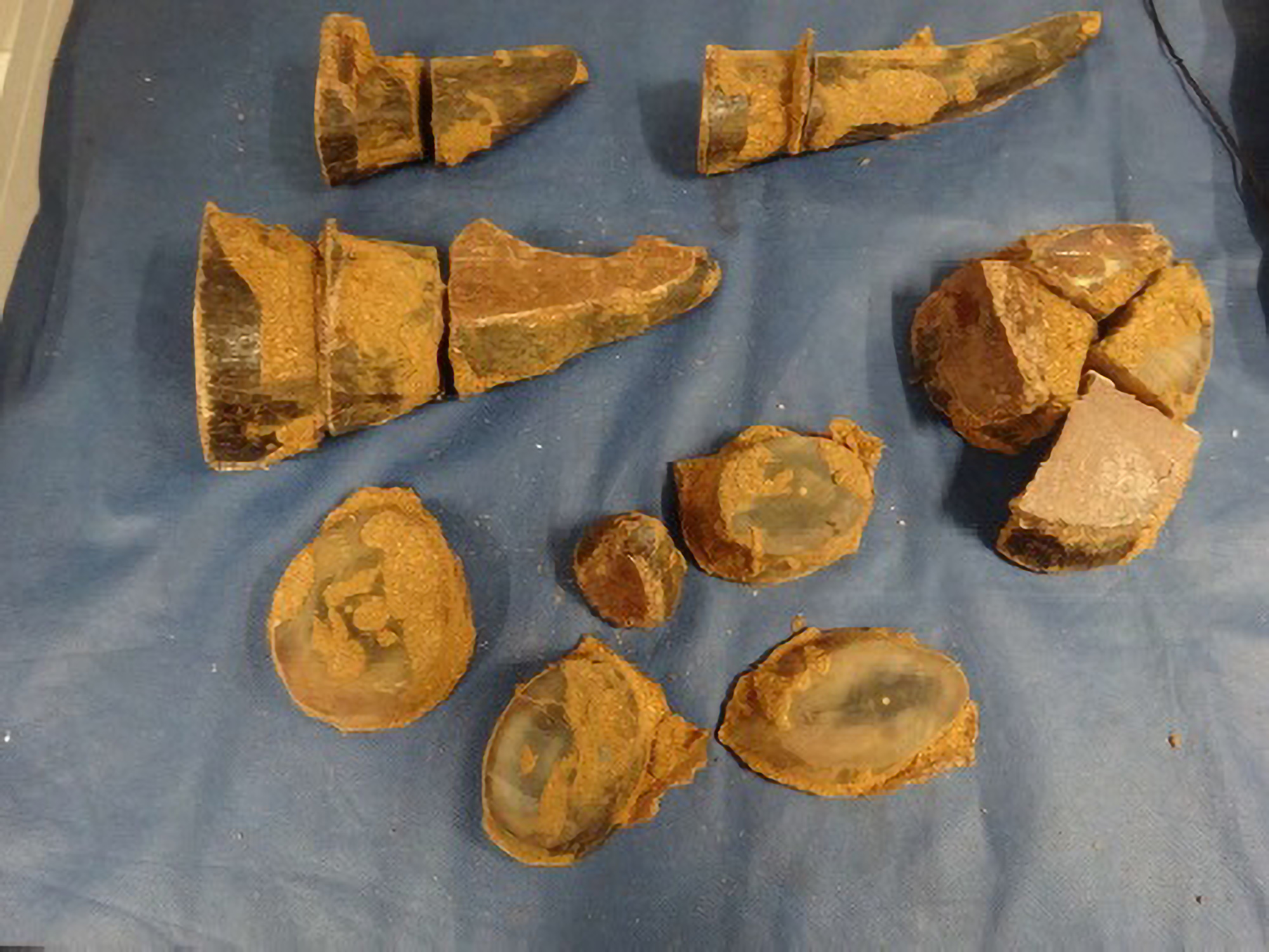 The 16 pieces of rhino horns weighing 6.7 kilos (14.9 lbs) which were attempted to be smuggled in the German city of Dresden. (Zoll/Zenger)

The contraband had been hidden in a false bottomed packing crate that contained a chandelier.

Customs spokesperson Marvin Christmann said in a statement released on Tuesday, May 31: “The package came from Angola and was to be transported to Vietnam via Germany.

“The parts of the horn were elaborately hidden.”

He said that the consignment contained a chandelier but an “X-ray showed irregularities”.

After opening the package, customs officers found that the wooden box in which the chandelier was stowed contained “a false bottom”.

The customs officer added that upon opening it, they found 16 pieces of rhinoceros horn, “compacted with sawdust”.

The German customs officer said: “According to the Washington Convention on Endangered Species, rhinos are a particularly protected family of odd-toed ungulates with five species still alive today.

“The import or transit of parts of these animals, therefore, requires special documents. Without the appropriate documents, import and transit constitute a violation of the Federal Nature Conservation Act and can be punished with imprisonment for up to five years or a fine.”

It is unclear if the German customs had detained any suspects at the time of writing, but Christmann also said that in December 2021, customs officers at Leipzig Airport had also found 15 pieces of rhinoceros horn that had been hidden inside a speaker and an electric welder.

The black rhinoceros is listed as a critically endangered species on the International Union for Conservation of Nature’s (IUCN) Red List of Threatened Species.

And the African Wildlife Foundation says that fewer than 5,000 black rhinos exist in the wild today.

The black rhinoceros, also known as the hook-lipped rhinoceros (Diceros bicornis), is a critically endangered species of rhinoceros found in southern Africa.

The Foundation says that their horns can often sell for as much as $60,000 per kilogram on the black market.

In some countries in Asia, they are coveted as a social status symbol, while in other countries, they are incorrectly advertised as ingredients to cure a wide range of ailments, from common headaches to deadly cancers.

In Yemen, despite an import ban, rhino horn is coveted by Muslim men when used for the handles of curved ceremonial daggers called “jambiya,” which are presented to boys at age 12 as a symbol of reaching manhood.