A toddler in Britain has been found to suffer from a very rare genetic condition.
By Simona Kitanovska June 2, 2022
Facebook
Twitter
Linkedin
Email 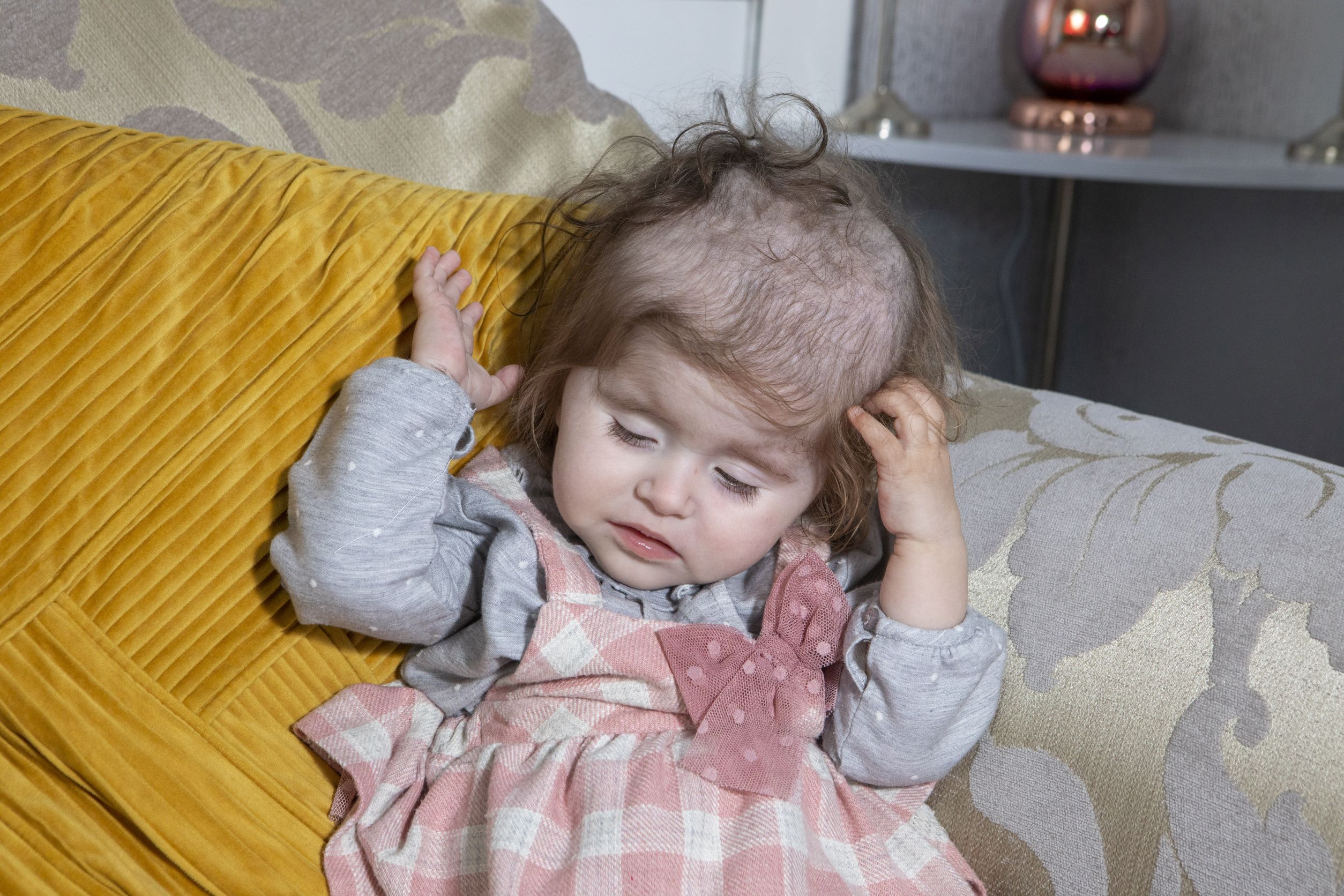 A toddler with a genetic condition so rare that only two other kids in the UK have been diagnosed with it. (Katielee Arrowsmith/Zenger)

A toddler with a genetic condition so rare that only two other kids in the United Kingdom have been diagnosed with it is having her hair shaved off for her own safety.

Sydney Miller, aged two-and-a-half, is described by her mum as just like a newborn baby due to Primrose Syndrome, which impacts only 50 children around the world.

Mum-of-five Stacie Miller, 36, said the child showed no signs of being any different from other babies when she was born, on March 18 2020, just before the first lockdown.

The first sign that something was up was that Sydney could not open one of her eyes, prompting fears she may have been born without an eyeball.

She was diagnosed with Horner Syndrome, where one eye is blue and one is brown, which is an indicator of an underlying condition – which sparked a string of appointments as medics tried to work out what was wrong.

A doctor who treated Sydney had been to a seminar on Primrose Syndrome, which is so rare that even healthcare professionals have to read about it on Google.

Sydney is non-verbal and her parents do not know if she will ever talk.

In January she was given two hearing aids because the inner ear has not fully developed, meaning she has hearing loss.

She cannot crawl or pull herself up, so Stacie has to carry her around, but she only weighs 20lbs, as much as a six-month-old baby – and her mum said children with the syndrome bear a physical resemblance to each other in a way similar to Down’s.

Sydney is now starting to attend an additional-needs nursery where she has an occupational therapist and a physiotherapist on-site and healthcare workers around.

Stacie, from Prestonpans, East Lothian, said the family are unsure what the future holds due to the rarity of the illness, which was initially feared to be cancer.

Stacie said: “When Sydney was born she didn’t look any different to any of my other children.

“As the weeks went on she wouldn’t open one of her eyes and it was thought it might be a blocked tear duct.

“Then they thought she might be missing an eyeball.

“She was diagnosed with Horner Syndrome which means one eye is blue and one is brown and it makes her sweat on one side of her body, sometimes she will be red and white.

“She was sent for an MRI scan which ruled out neuroblastama, then they started doing genetic testing.

“A genetics doctor who had seen her had been at a seminar on Primrose Syndrome, and he said before the tests came back that he thought that was what it was.

“It is very very rare, there are only 50 children with it worldwide.”

Due to a pituitary cyst, Sydney may need hormone therapy when she gets older.

Stacie added: “She is non-verbal and we don’t know if she will be able to talk.

“She can’t crawl and she can’t stand.

“There is so little research into Primrose Syndrome because it is such a rare illness, the main characteristic is muscle wastage and scolioisis and autism.”

The couple realized Sydney’s hair was posing a danger to the child when Stacie took a photo of her and realized there were bald patches on her head.

Stacie began to notice Sydney was pulling strands of hair from her scalp, which later came out in clumps.

She then began chewing it and it became entangled in the feeding button she has in her tummy.

Her hair will be shaved off on Friday to stop the risk of choking, amid hopes she will grow out of the desire to pull it out – described as ‘looking for feedback’, which also includes high pitched screaming and banging her heels until they are bruised.

Sydney has an unusually high pain threshold and when her full set of teeth emerged aged six months she wasn’t bothered by teething.

However, she was getting through a dummy a day as she couldn’t stop munching on them, and her parents feared they posed a choking risk.

“When she smiles it lights up the room.

“It is hard to predict because we don’t know what to expect.

“All the health professionals have had to Google Primrose Syndrome so we are very limited with what we actually know, it was only discovered in the 80s.”

Sydney was treated at the Edinburgh Sick Kids Hospital, and will start nursery properly when she is three.

Stacie said: “Covid was really tough as only one parent was allowed in hospital and I was trying to feed back to Sydney’s dad what I’d been told.”

She said the family include Sydney in all their activities, and will be taking her to Turkey on vacation in July.

They are looking forward to being able to move to a bigger house, as the three-bed home where they live is cramped with Sydney’s equipment and has 21 steps in front.

Stacie said: “If she had had a better-known condition it would have been easier.

“Nobody knows day to day what her needs will be.

“She’s very small for a child her age and she curls up, she’s like a newborn baby.”

The family are fundraising for another toddler, Flora Gentleman, aged three, who needs cancer treatment abroad.

“I’ve set up a Facebook just for her so people can keep up to date with her condition and treatments.”