Mom’s Agony : Mom Of Terminally Ill Baby Gets Told By Nurse She ‘Can Always Have Another One’

Maisie is also believed to be one of only six people in the world to be diagnosed with the life-limiting condition.
By Simona Kitanovska June 2, 2022
Facebook
Twitter
Linkedin
Email 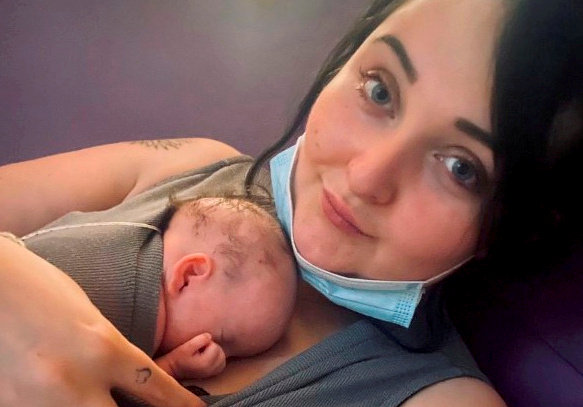 The mom of a terminally-ill baby who is just one of six children in the world with a rare genetic condition has revealed how she was told by a nurse: You can always have another one. (Matthew Newby/Zenger)

The mom of a terminally-ill baby who is just one of six children in the world with a rare genetic condition has revealed how she was told by a nurse: “You can always have another one.”

Phoebe Elliot, 26, says she regularly gets insensitive comments from complete strangers about her daughter Maisie, who suffers from Galloway-Mowat syndrome 6.

The extremely rare genetic disorder means the five-month-old struggles to see, eat and move, and is unlikely to survive into late childhood.

Maisie is also believed to be one of only six people in the world to be diagnosed with the life-limiting condition.

Despite the tragic prognosis, Phoebe says people are often rude and make inappropriate comments and now wants to raise awareness of Maisie’s plight.

She claims one nurse even said to her “you can always have another one” while other people come up to her on the street and ask: “What’s wrong with your baby?”

Mom-of-two Phoebe said one person told her, “She’ll get better, chin up,” even after revealing the devastating details of Maisie’s illness.

Phoebe, of Droitwich, Worcestershire, England, said: “Galloway-Mowat syndrome is terminal and it will affect her livers and kidneys, she won’t be verbal or mobile.

“When things are progressing and getting worse and you know that she won’t get better it’s very challenging.

“One nurse even said ‘you can always have another’ which is so insensitive.

“We actually couldn’t even have another child if we wanted to and we had to go through fertility to have Maisie and I had an emergency caesarian.

“The staff at the time advised me not to have more children so for a nurse to say that to me was pretty shocking.

“I just thought it was so insensitive to be honest. I wouldn’t expect that from anyone, you can’t just exactly replace your child.

“In hospital the nurses were also making constant little digs about my weight and said maybe that was why Maisie was so small.

“I wasn’t there to be lectured about my size. I think it’s terrible.

“I was told by one nurse she was that tiny because I was so obese, I’m not skinny but I’m only a size 12.

“People see our disability badge and try and peer into the car to take a look.

“One woman was saying ‘what’s wrong with her’. I told her it was terminal but she just said ‘oh, it’ll be fine’.

“I know a stranger doesn’t know the full story but I just want people to think and be a little more considerate.”

In addition to Galloway-Mowat syndrome 6, Maisie as primordial dwarfism and is unable to eat by herself so she relies on a feeding tube and pump.

Phoebe is now hoping to raise money so they can enjoy special days out together to create some lasting memories for their family.

Phoebe, who lives with husband James, 28, and their three-year-old son Harry, said: “She’s just one of six children in the world.

“It was a shock when she was diagnosed and obviously we had a few down days knowing that her life was very limited.

“But we are just trying to keep positive and be led by her, we want to stay strong for her. We want to treasure every day.

“Part of her syndrome is uncontrollable crying. The only thing that keeps her happy is a little disco ball. It’s only light that makes her happy, so it’s really hard.

“The oldest child that had it lived up to the age of 14, but Maisie has a more severe case so her life expectancy is until early childhood.

“We have a GoFundMe for some sensory lights and for her and her little brother to make some special memories together.”