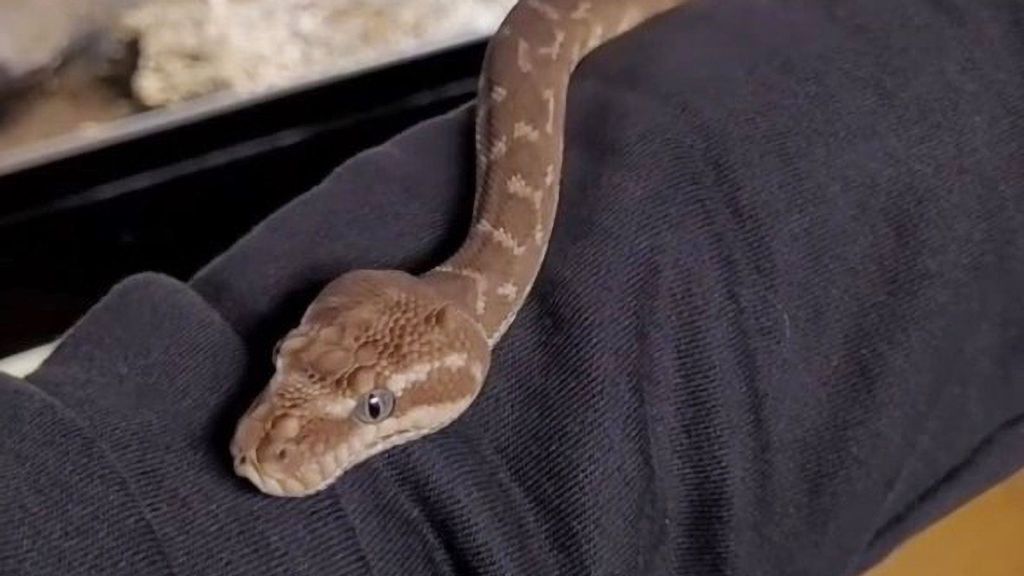 Rough scaled python (Morelia carinata), a female born in 2019 in the Netherlands, after she has shed her skin. (@northernreptiles/Zenger)

These terrifying videos showing a pet snake shedding its skin and another sinking its teeth into a mouse have recently been posted by a dedicated python fan.

Snake-mad Jacop Frank, 29, told Zenger News in an exclusive interview: “I have been keeping different reptiles on and off for around 15 years.

“But I have now found the particular species I’m really fascinated by and want to learn even more about.

“I’m digging into the natural history and different behaviors to try and learn more about them and how to best care for them in captivity.”

The 29-year-old logistics worker from Sweden has an astonishing nine pet snakes from three different species.

He told Zenger News he has “a special love for Australian pythons, with a focus on rough-scaled pythons (Morelia carinata)”, the ones seen in the videos.

Jacop told Zenger News: “My oldest snake is Morran, my big black-headed python girl. She was born in 2018 so is four years old.”

Jacop revealed snakes were not his first passion. He said: “I used to be a lizard guy when I started in the hobby. I still love them but have put my focus on snakes for different reasons.”

The first video shows the ghostly skin shed by one of Jacop’s pet snakes.

He told Zenger News it is “a female born in the Netherlands in 2019 and doesn’t have a name yet”.

The second, stuff-of-nightmares video shows another of Jacop’s pets getting its food.

As Jacop waggles a dead mouse to make it look more alive, the python begins to take notice.

Suddenly, its head shoots forward and pins the mouse in its fangs as it wraps its coils around the rodent’s body.

Jacop said: “The snake in the feeding video is also a rough-scaled python. A little baby male born in 2020 from Italy. Also nameless.”

He added: “Why I’m particularly fond of this species is because of its history. It was discovered to science in 1981, so is fairly new to the world, and has one of the smallest distribution of any python.”

Jacop and his snakes can be found at www.instagram.com/northernreptiles, where he has over 7,000 followers.

He writes in his social media bio: “Just a Swedish guy and his reptiles. Main focus on Australian and Indonesian species.”