A 3400-year-old city has emerged from the Tigris River in Iraq and is being investigated by a team of archeologists.
By Joseph Golder June 2, 2022
Facebook
Twitter
Linkedin
Email 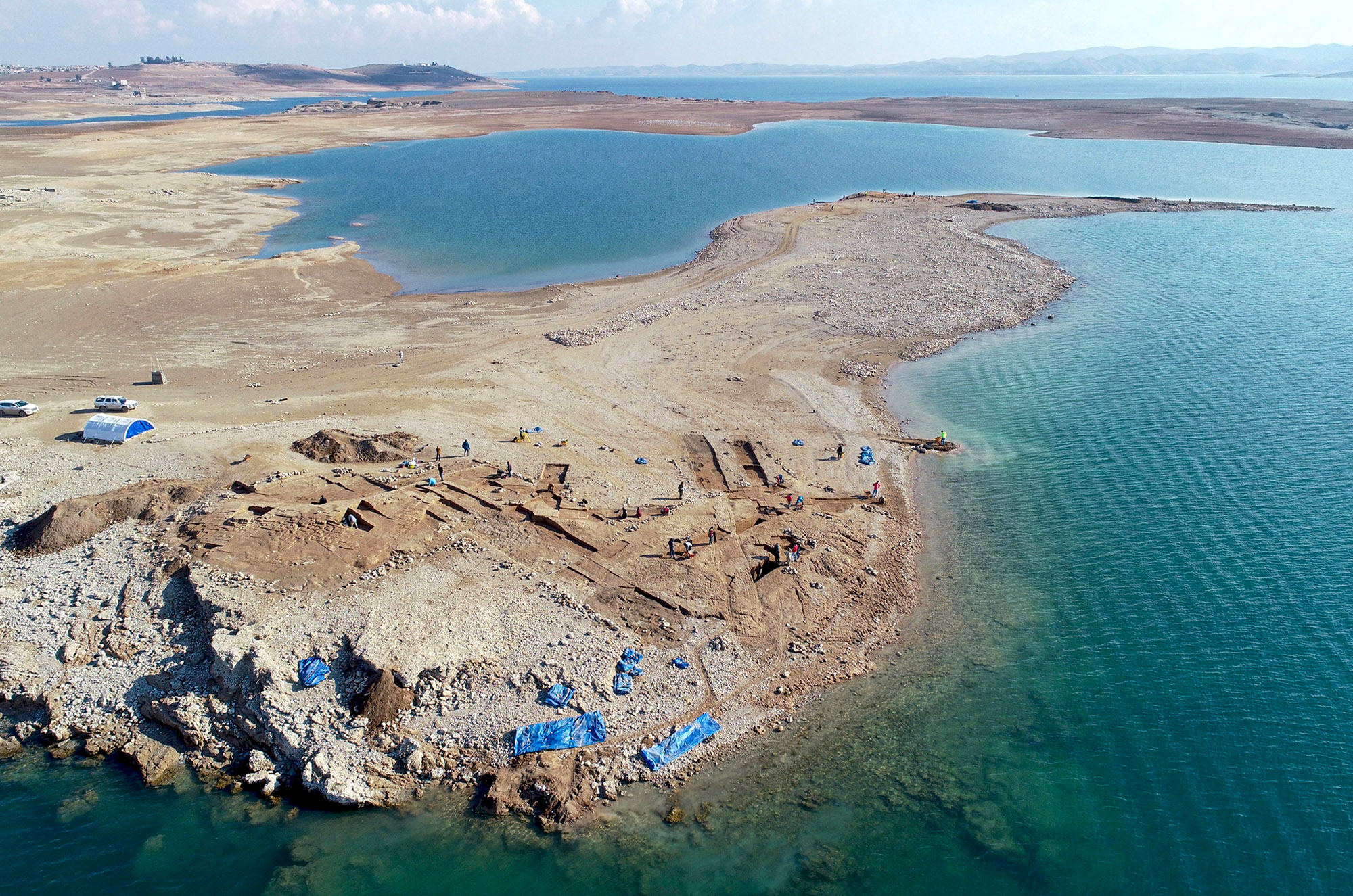 The archaeological site of Kemune in the dried-up area of the Mosul reservoir. (Universities of Freiburg and Tubingen, KAO/Zenger).

A team of archaeologists had to scramble to investigate a 3400-year-old city before it was submerged again after it emerged from the Tigris River in Iraq due to drought.

Their fast reaction allowed them to discover over 100 ancient clay tablets, with one researcher labeling the discovery and the fact that they had survived submerged underwater for so long “a miracle”.

The settlement emerged from the waters of the Mosul reservoir, which is located in northern Iraq and includes the Mosul Dam (once known as Saddam Dam), earlier this year as the water levels dropped due to an extreme drought in the country.

The city, which was discovered by a team of German and Kurdish archaeologists, dates back to the Mittani Empire era, in the Bronze Age, and was once located on the Tigris River, the University of Freiburg said in a statement released on Monday, May 30.

The Tigris and Euphrates rivers form a region between them known as Mesopotamia, which was the scene of Biblical events.

The University added: “The extensive city with a palace and several large buildings could be ancient Zakhiku – believed to have been an important center in the Mittani Empire (ca. 1550-1350 BC).”

The university explained that Iraq is “one of the countries in the world most affected by climate change” and that “to prevent crops from drying out, large amounts of water have been drawn down from the Mosul reservoir – Iraq’s most important water storage – since December.”

This in turn, led to the water level in the reservoir dropping and revealing the Bronze Age city that had been submerged for decades. It has never undergone any archaeological investigation before.

In its statement, the university said that the recently revealed ancient city is located at the archaeological site of Kemune, in the Kurdistan Region of Iraq and which was itself first discovered in 2013 when the reservoir’s water levels dropped back then too.

But this time, the archaeologists had to act very quickly to excavate and document the new site before it was submerged again.

The excavations, conducted by Kurdish archaeologist Hasan Ahmed Qasim, chairman of the Kurdistan Archaeology Organization, and the German archaeologists Ivana Puljiz of the University of Freiburg, as well as Peter Pfälzner of the University of Tübingen, took place in January and February 2022 in collaboration with the Directorate of Antiquities and Heritage in Duhok.

A team was hastily put together in a matter of days and funding was secured on short notice from the Fritz Thyssen Foundation through the University of Freiburg.

The University said: “The German-Kurdish archaeological team was under immense time pressure because it was not clear when the water in the reservoir would rise again.”

The researchers managed to map the city and in addition to the palace, which had been partially documented in 2018, several other large buildings were discovered, including a massive fortification with walls and towers. The archaeologists also discovered a multi-story storage building and an industrial complex.

The University said: “The extensive urban complex dates to the time of the Empire of Mittani (approx. 1550-1350 BC), which controlled large parts of northern Mesopotamia and Syria.”

Puljiz said: “The huge magazine building is of particular importance because enormous quantities of goods must have been stored in it, probably brought from all over the region.”

And Qasim said: “The excavation results show that the site was an important center in the Mittani Empire.”

The researchers were surprised by how well preserved the walls were, sometimes reaching heights of several meters despite being made of sun-dried mud bricks that had been under the water for over 40 years.

The University said: “This good preservation is due to the fact that the city was destroyed in an earthquake around 1350 BC, during which the collapsing upper parts of the walls buried the buildings.”

The researchers also found a number of artifacts, including over 100 cuneiform tablets dating back to the Middle Assyrian period, shortly after the earthquake hit the city. The researchers are hoping that this discovery will help yield information about the fate of the city and the beginning of the rise of the Assyrians in the area.

Pfalzner said: “It is close to a miracle that cuneiform tablets made of unfired clay survived so many decades underwater.”

The researchers covered the buildings they excavated with tightfitting plastic sheets and gravel to avoid them being damaged when the water inevitably rose again. The university said that the site is now once more completely submerged.