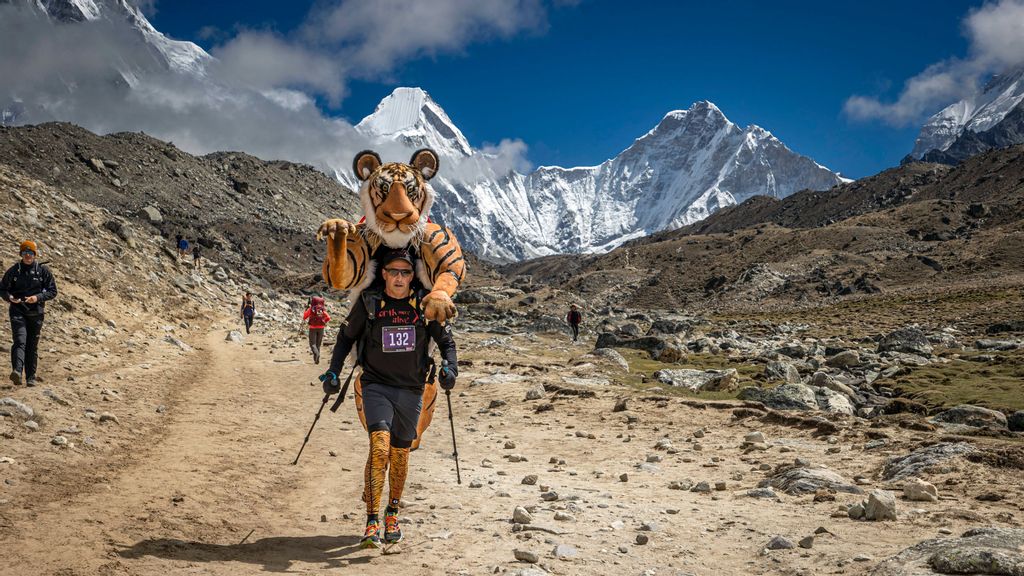 British wildlife photographer Paul Goldstein completed the gruelling Everest marathon Sunday (May 29) - with his faithful 9ft tiger on his back. (Paul Goldstein/Zenger)

Tiger Man did it!

British wildlife photographer Paul Goldstein completed the grueling Everest marathon on May 29 with his faithful 9-foot tiger on his back.

The Wimbledon-based conservationist has already run an amazing nineteen charity marathons in the distinctive outfit.

For what he said was his final run, Paul chose what is considered to be one of the highest and toughest races in the world; with a starting point at 5,364 meters (17,598 feet) above sea level.

It took the 59-year-old approximately twelve hours to finish as the 140th across the finish line, although he adds: “141st, as the tiger got over the line just ahead of me – by a whisker.”

It was an eleven-day upward trek to even make the start, which included two nights camping on the moving Khumbu ice platform at Everest Base Camp.

Paul, who is raising funds for his Worth More Alive charity (https://bit.ly/38ucKMz), explains: “The campaign started twelve years ago with the London Marathon. It has since completed 19 marathons and climbed Kilimanjaro. This was its 20th and last and fitting it should be the toughest challenge.

“I battled illness, cold, wind and altitude, tigers face far more hardships: they have been abused for years and many continue to live in hideous incarceration or in apartments as pets. Their body parts continue to be harvested, and until this changes they will continue to be persecuted.

“They are worth so much more alive than dead on the poacher or dealer’s slab. This campaign has raised hundreds of thousands of pounds, I hope it has raised awareness but I have run my last marathon in her.”

On the night before the marathon, Paul reported: “Everest Base Camp, a ragged collection of tents on a moving glacier. I woke in the night many times: partly the cold, partly one runner’s uncontrollable screaming – six were medivacked by chopper yesterday – perhaps it was the crump and concussion of a distant avalanche or rumble of storms lower down the mountain or the creak and groan of the Khumbu ice.”

Here is a link to the donation page: https://exodus.enthuse.com/cf/worth-more-alive