The Day A Tsunami-like Flood Struck A Landlocked Mountain Town

More than 130 years ago, Johnstown, Pennsylvania, was wiped out in minutes when a 40-foot-high wave enveloped it.
By John Murphy June 1, 2022
Facebook
Twitter
Linkedin
Email 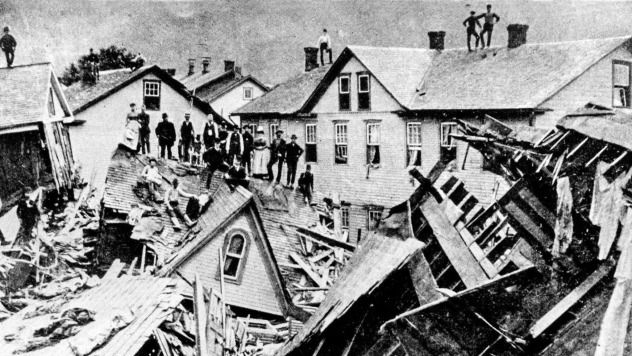 People seen standing on the rooftops in this striking image were likely sightseers who came to see the flood destruction in Johnstown, Pennsylvania. (Johnstown Area Heritage Association)

On the morning of May 31, 1889, residents of Johnstown, Pennsylvania heard a low rumble in the distance that might have been the sound of thunder, and they noted a breeze blowing from the northeast that was likely accompanied by an odd, muddy smell. A train headed toward Johnstown emitted a constant whine as if the whistle was stuck. As the roar grew louder, so did the wind, tossing trees around and tearing wood from nearby buildings.

Then they saw it coming, and for most it was too late. One observer who survived the catastrophe remarked that the debris-filled wave looked like “a huge hill rolling over and over.” Huge explosions from boilers expelled a black “death mist.” These were the last sights and sounds that more than 2,200 people experienced as a 75-foot-high tsunami of water and debris crushed the small land-locked town.

“What seemed to make the most lasting impression was the cloud of dark spray that hung over the front of the wave…it was talked of as ‘the death mist’ and would be remembered always,” historian David G. McCullough wrote in his 1968 book, “The Johnstown Flood.”

More than 130 years ago, entire communities in central Pennsylvania were wiped out in minutes as a 40-foot-high tsunami-like wave rushed through the city of Johnstown, about 60 miles east of Pittsburgh. For years, the only thing that had protected the town from tragedy was a neglected dam and, ostensibly, the people who ignored the warning signs of a coming disaster.

“No one could see the immense height to which that artificial dam had been built without fearing the tremendous power of the water behind it …People wondered and asked why the dam was not strengthened, as it certainly had become weak, but nothing was done, and by and by they talked less and less about it,” said a 19th century Johnstown resident.

The South Fork Dam was constructed in 1852 to provide a source of clean water for the area, according to Tata and Howard, a water consulting and engineering firm. The dam was rebuilt just 10 years later after a minor breach occurred. The rebuilding of the dam created Lake Conemaugh, a large human-made lake that was held back by the South Fork Dam.

The dam’s maintenance was transferred to the South Fork Fishing and Hunting Club in 1881, which used the land around the lake to build a recreational area. This new area was visited and enjoyed by the club‘s elite clientele who traveled from Pittsburgh.

Several modifications were made to the dam by the private club to improve the experience for their members. In order to maintain the fish population, the club installed fish screens in the spillway and blocked off the drainage pipes of the dam, causing the lake to fill up dangerously high, especially during the rainy spring season.

Heavy rain during the spring of 1889 caused the lake water to swell, putting tremendous pressure on the dam. As debris built up in the lake, the fish screens added by the club acted as a trap and prevented water from moving through the spillway, which caused the debris to stay in the lake, and raised the water level even more.

In late May, a spring storm brought heavy rain to the eastern United States, including central Pennsylvania. The water at the lake rose from the storm and began to pour over the top of the dam. People who saw the imminent danger were dispatched to the communities below to alert residents to evacuate.

In years past, similar warnings were given for minor seasonal flooding from the Little Conemaugh River, so few residents heeded this warning, unaware of the disaster that was about to unfold.

Just after 3 p.m. on May 31, 1889, the South Fork Dam collapsed, sending nearly 5 billion gallons of water rushing down into the communities below. In a matter of just 10 minutes, the large mass of water tore through the communities of South Fork, Mineral Point, Woodvale and East Conemaugh.

Train engineer John Hess heard the loud roar of the flood barreling toward the train terminal where he was awaiting orders. Hess quickly tied down the whistle of his train engine and drove it westward where the flood would soon impact, warning residents of the incoming powerful flood. Many residents in communities along the track of the train heard the steady siren from the whistle and fled.

Everything in the path of the tsunami-like wave accumulated as it rushed down, including barns, houses, and even city buildings. Trees, boulders, wood and railroad cars were swept into the raging water as it flooded into several communities.

About an hour after the initial collapse, the water had accumulated into a 40–foot–high wave that measured nearly a half–mile wide and was rushing forward at 40 miles per hour. This dangerous and deadly wave of water was on a direct path to hit Johnstown.

In a matter of minutes, 1,600 homes were washed away and more than 2,000 people were killed, including 99 entire families, according to History.com. The wave was so strong that 170,000–pound locomotives were thrown nearly 5,000 feet off the tracks. Debris, including houses, piled up on the Stone Bridge in Johnstown and caught on fire.

“The fearful rushing waters opened the gap with such increasing rapidity that soon after the entire lake leaped out…It took but 40 minutes to drain that 3 miles of water,” said South Fork Club engineer John Parke on the day of the disaster.

Bodies were recovered up to 22 years later and as far away as 350 miles away from Johnstown in Cincinnati. The 1889 Johnstown flood was the greatest single-day civilian loss of life in the U.S. until the World Trade Center collapsed amid the terrorist attacks of Sept. 11, 2001, according to the Johnstown Area Heritage Association.

The devastating flood of 1889 also served as an opportunity for the recently established American Red Cross, which was founded by nurse and Civil War hero Clara Barton in 1881. Barton and more than 60 volunteers arrived at the scene from Washington, D.C., about five days after the flood unfolded. It became the first major disaster relief opportunity for the organization, which helped provide care and support to victims. In total, the Red Cross distributed new and used supplies worth around $211,000 and helped about 25,000 people.

“The exhaustive news coverage of the Johnstown flood and the relief effort helped establish the American Red Cross as the major disaster relief agency in the United States,” the Johnstown Area Heritage Association states.

While this disaster was the most severe tragedy the city of Johnstown had experienced in recorded history, it would be far from the last catastrophic weather event. Nearly 50 years later in 1936, Johnstown was the center of another disastrous flood.

In March of that year, melting snow caused a heavy runoff which amplified flooding caused by three days of heavy rain. Flood levels were as high as 14 feet and killed over 20 people. Nearly 3,000 buildings were severely damaged and 77 were destroyed, causing an estimated $41 million in damages.

About 40 years later, more severe flooding would impact Johnstown during the summer of 1977. A severe thunderstorm stalled over Johnstown and caused over a foot of rain to pour over the city, overflowing several small streams. Water overflowed the channel system in Johnstown and several dams failed. About $300 million in property damage was caused by the flood, and 85 people were killed.

In the present day, a memorial for the victims of the Johnstown flood remains at the site of the disaster, in addition to a visitor center and museum. Every year on its anniversary, 2,209 luminaries are lit to honor every flood victim caused by the catastrophic event.