Other swimmers managed to save two young women who had been with the victim, named as Emmeril Kahn Mumtadz.
By Thomas Hochwarter June 1, 2022
Facebook
Twitter
Linkedin
Email 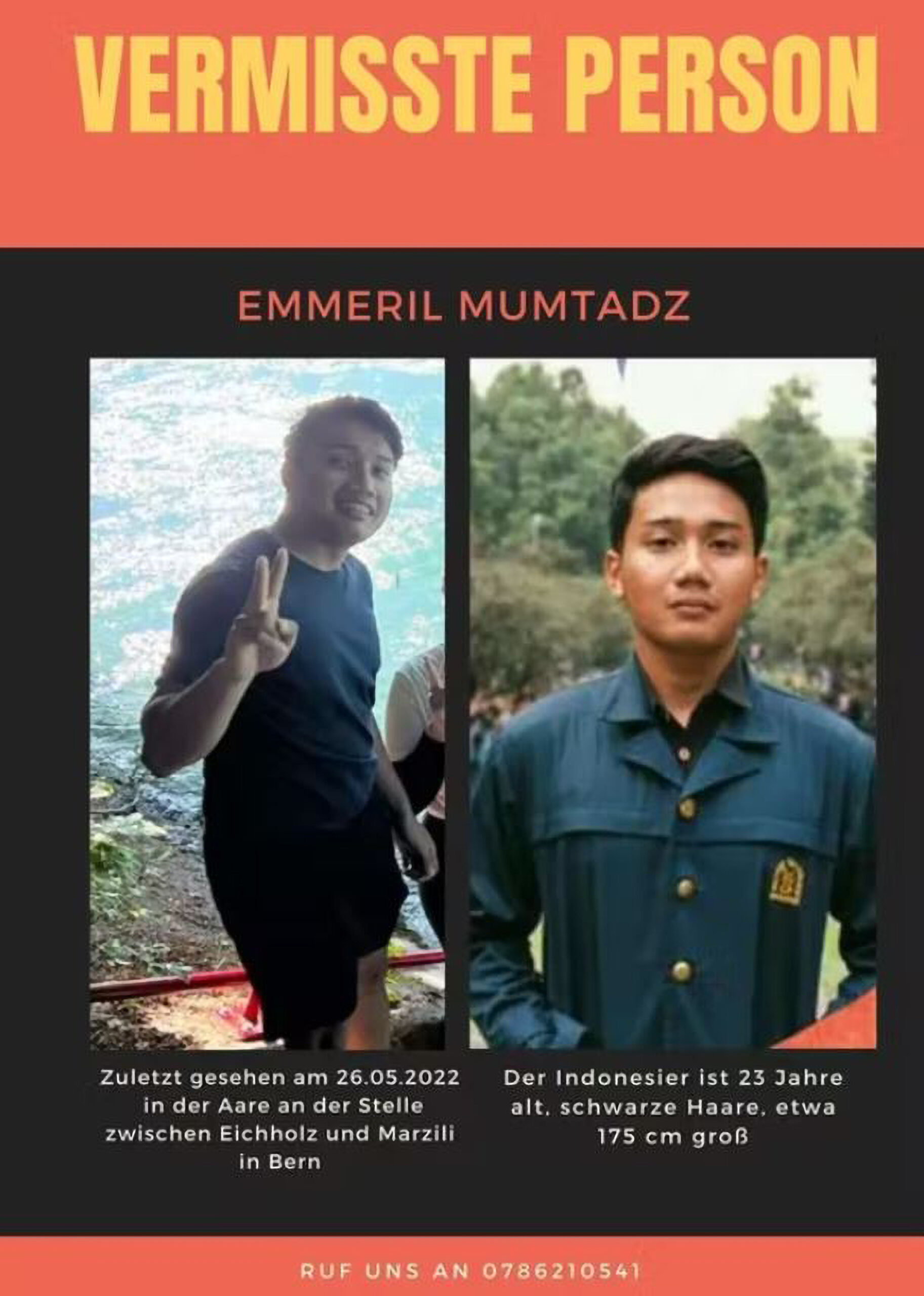 Missing poster for Emmeril Mumtadz, 23, disappeared while swimming in the Aare in Bern, Switzerland, on May 26. ( The Embassy of the Republic of Indonesia in Bern/Zenger)

The son of a high-ranking Indonesian politician has gone missing after a swim in a river in Switzerland.

Police in the city of Bern were informed about three people experiencing difficulties in the local Aare River at 9.45 a.m. on Thursday, May 26.

Other swimmers managed to save two young women who had been with the victim, named as Emmeril Kahn Mumtadz.

Their identity has not been revealed by officials.

Mumtadz has been formally reported missing since the incident.

Mumtadz is the son of Mochamad Ridwan Kamil, the Governor of West Java.

With more than 48 million inhabitants, West Java is the most populous province of Indonesia.

Mumtadz reportedly went to Switzerland on holiday and to research a master’s degree program to continue his studies.

His 50-year-old father had been in London on government business but flew to Switzerland when diplomats contacted him about his son.

Mochamad Ridwan Kamil announced last January he would run for president of Indonesia in the 2024 federal election.

The renowned architect – who made several cameo film appearances between 2014 and 2020 – has been in office since September 2018.

The Aare’s banks in the city’s historic old town are a popular meeting point and place to hang out, especially in the summer.

Residents and visitors of Bern alike love going for a swim in the stream. The city has appealed to everyone to be careful when doing so.

An announcement on its official website says: “It is of great importance to approach the Aare River with respect and common sense. Please inform yourself regarding potential hazards.

“Swimming is only recommended to skilled and experienced individuals. It happens at everyone’s own risk.”

The search for the 23-year-old Indonesian is continuing.

Local police said water police units have joined the operation which focuses on a stretch of the river several miles downstream.

The Embassy of the Republic of Indonesia in Switzerland announced on its website: “A team led by the Bern Maritime Police continued their search for the missing Indonesian national, Emmeril Kahn Mumtadz, nickname Eril (23 years).

The Aare – a tributary of the High Rhine – is the longest river that both rises and ends entirely within Switzerland. Its total length from its source to its junction with the Rhine comprises around 183 miles.