The video was shared on ‘The BabyGirl’ TikTok page by her owner Melissa K. Sims, 53, an attorney from Johnston City, Illinois.
By Lee Bullen June 1, 2022
Facebook
Twitter
Linkedin
Email 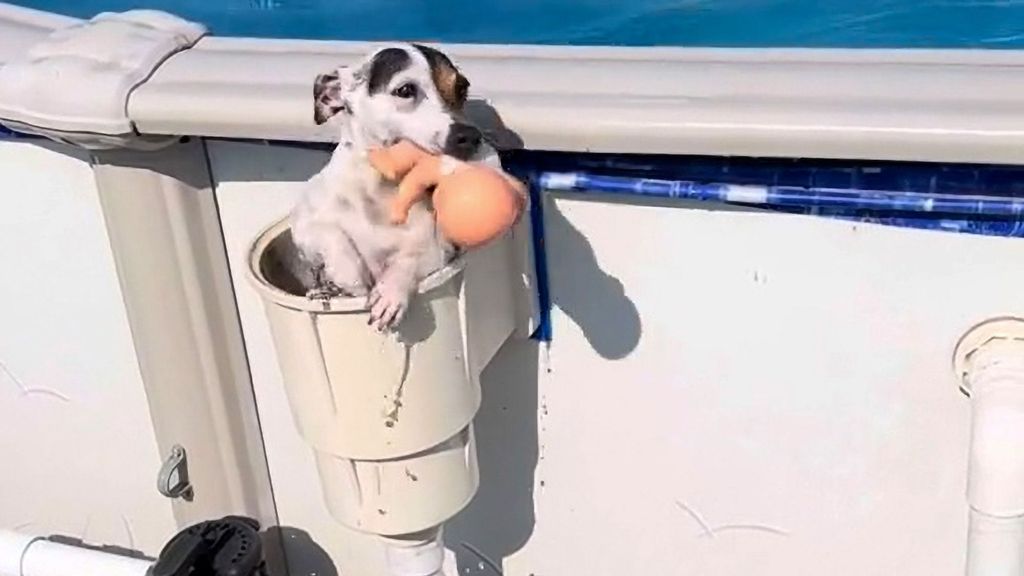 Jack Russell discovers a new way to get out of the pool in Johnston City, Illinois on May 25, 2022. (@melissaksims/Zenger).

BabyGirl the mini Jack Russell uses a pool filter system as her own VIP exit – that is Very Important Pooch – as seen in a viral video.

The video was shared on ‘The BabyGirl’ TikTok page by her owner Melissa K. Sims, 53, an attorney from Johnston City, Illinois.

Videos show BabyGirl surfing and frolicking in the swimming pool as well as using the pool’s skimmer basket as her own little doggy door.

“She is very petite compared to other Jack Russells, with her legs not much longer than your front forefinger.

“I have had her since she was two months old and she has swam since the day that I got her.”

She added: “I have rescued Jack Russells for many years, and they have loved to swim and surf.”

Melissa told Zenger News: “BabyGirl was used to using the steps at my in-ground pool.

” My boyfriend has a house with an above-ground pool. She is very independent and likes to get in and out of the pool on her own.

“She went for the skimmer basket seven years ago like it was her own personal doggy door and used the ledge to walk around.

“She is small, but fierce. Once, she went after a very large bobcat hiding in the garage.”

Melissa said: “Jack Russells are very agile, athletic and smart. They need to stimulate their minds as well, so I will put small toys in the pool for her to ‘rescue’ or try to find.

“She can maneuver her surfboard in a still pool and get to the edge to jump out. Though she is very independent, we never leave her alone.

“There are eagles in the area which will snatch a small pet.

She added: “BabyGirl is kind of a diva!”

Melissa told Zenger News: “A lot of followers are worried for her. I used to worry for her, too, but she is really very careful. I am not agitated by some of the comments, most people come from a place of loving concern.

“Many followers have asked me not to use music as they prefer to hear her swim and tippy tap on the ledge. They like to hear her ears slap as she shakes. Many have found her videos to be relaxing and therapeutic for those with anxiety disorders, or who are into ASMR (autonomous sensory meridian response) for post-traumatic stress disorders.

“I love to hear that and am very glad they get to see the magic that is BabyGirl.”