Clients can tailor cabins to top-shelf specifications, such as a bathroom with shower or a king-sized bed.
By Michelle D. Madsen June 1, 2022
Facebook
Twitter
Linkedin
Email 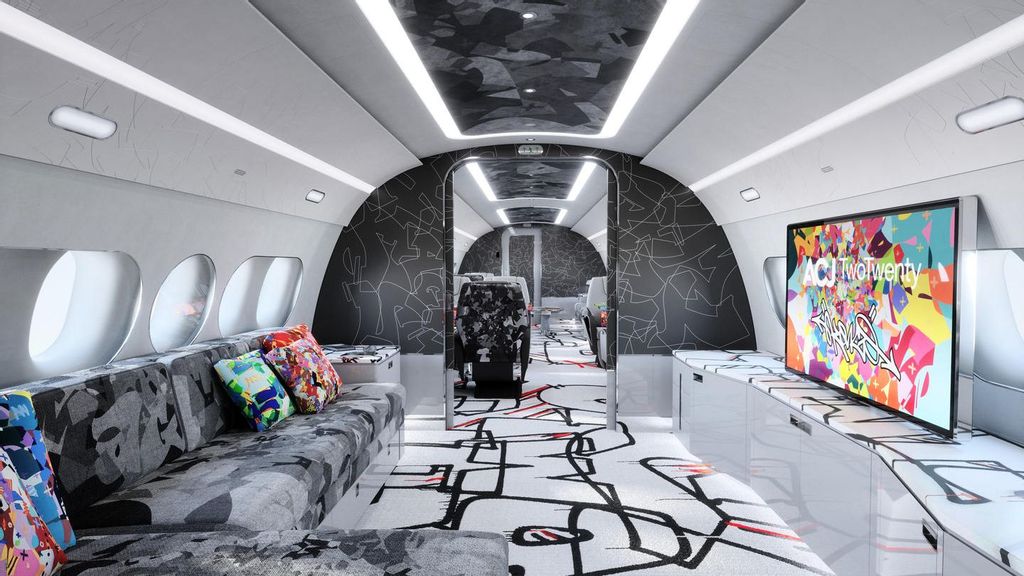 A rendering of a custom-designed cabin for an ACJ Two Twenty luxury jet. (Herve Gousse/Master Films)

Airbus, a European multinational aerospace corporation, is pushing boundaries at its ACJ Two Twenty Creative Studio in France, where customers can walk onto the sales floor and use virtual-reality technology to customize the interior of their swanky new ACJ Two Twenty Xtra Large Bizjet.

Passengers can tailor cabins to their top-shelf specifications.

They can receive satellite live television broadcasts, safety instructions in their own language, live views from landscape cameras outside the aircraft, international news or connecting flight information, according to the Airbus site.

These latest-generation entertainment systems are fully integrated into the seat, which provide greater legroom, as well as connecting personal electronic devices, such as smartphones, tablets or laptops.

Each ACJ Two Twenty jet has a pre-designed interior.

Customers can use the Touch controllers on a Quest 2 VR headset to expand on this initial design and configure the interior layout. This included the ability to rearrange walls, add tables and design the ideal window seat.

Customers can also choose the tiniest details by looking at color and fabric swatches, as well as materials for seating, flooring and countertops, in the Creative Studio. They can also move, add or subtract lighting using the VR design studio.

Customers can also add other cool features, like a king-sized bed, a galley for their personal chef, a small movie theater, and a full-sized bathroom with a shower to their ACJ Two Twenty Creative Studio. Each jet can accommodate up to 18 people and has up to six living areas. If that’s the case, they might want to think about adding two bathrooms.

Customers can then move around in virtual reality after finishing the design of their luxury jet. If they want to change something, they can simply open the menu and make the change in real time.

The virtual-reality experience can also be used by mechanics and technicians to learn where specific cables and access points are located inside the jet.

Airbus has partnered with Comlux Completion to build each custom jet, bringing their virtual reality design to life. Virtual-reality technology allows them to reduce costs while speeding up the completion of each luxury jet, according to Comlux.

Airbus has announced that six custom Xtra Large Bixjets jets have been sold for a total of $81 million each. All customization will take place at Comlux’s Indianapolis facility, after which they will be shipped to Dubai’s FIVE Palm Jumeirah Hotel.