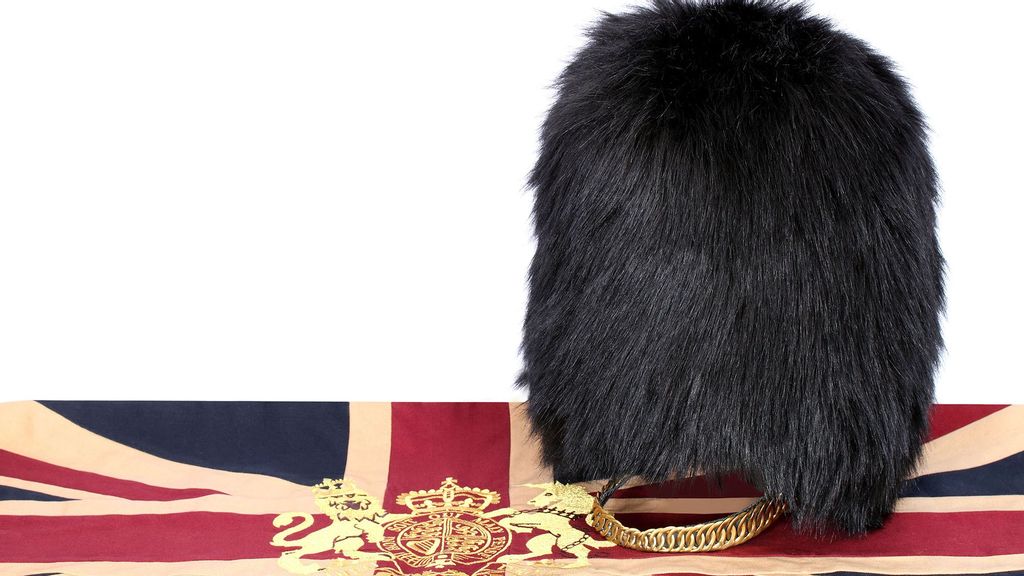 A faux bearskin cap made by PETA. Wildlife photographers Andy Parkinson, Megan McCubbin, and Aaron Gekoski added their names to a letter sent on PETA’s behalf to Secretary of State for Defense Ben Wallace, calling on the Ministry of Defense to stop funding the slaughter of black bears for the Queens Guard’s caps. (PETA/Zenger).

Animal activists have stripped down nearly-nude to protest against royal guards’ iconic bearskin hats ahead of the Queen’s Platinum Jubilee.

Royal guards will wear the military headgear for Her Majesty’s Trooping the Color birthday parade on June 2, which this year will kick off the Platinum Jubilee celebrations marking the Queen’s 70 years on the throne.

The same day Prince William was rehearsing his role in the ceremony last Saturday, and sporting a bearskin cap, demonstrators staged a semi-nude protest at nearby Marble Arch.

The group’s Senior Campaigns Manager Kate Werner said: “The Ministry of Defense is using taxpayer funds to pay for caps made from the skin of slaughtered bears.

“Every day that bears are blasted with bullets or arrows to be skinned for our soldiers brings dishonor to our country.

“Now that an animal-friendly replacement exists, the MoD must use it.”

PETA added in a statement: “It takes the hide of one bear to make a single cap.

“The MoD frequently makes the claim that the bearskins are the by-product of a ‘cull’ overseen by Canadian authorities.

“Yet, as confirmed to PETA by both the federal and provincial Canadian governments, no such ‘cull’ exists.

“Instead, the Canadian government issues ‘tags’ to hunting enthusiasts, who are then free to bait and kill an allotted number of bears and sell their pelts for profit.

“Many bears are shot several times, and some escape and die slowly from blood loss, gangrene, starvation, or dehydration.”

British Secretary of State for Defense Ben Wallace was also urged by activists to put an end to the shooting of black bears for the caps.

The MoD has previously rejected a proposal for a man-made substitute for fur to be used.

PETA said: “Over 1 million pounds of taxpayer money has been spent on 891 bearskin caps over the past seven years, but ECOPEL has offered to provide the MoD with faux bear fur free of charge until 2030.

“A government petition on the issue has been launched. When it reaches 100,000 signatures, a much-needed parliamentary debate about the bearskin hats will take place.”

The move comes days before the United Kingdom is due to celebrate the Platinum Jubilee of Queen Elizabeth II, 96, the first British monarch to reach 70 years on the throne.

A letter to Wallace from photographers supporting the PETA protest said: “The world is in a challenging place right now, and the need for compassion and conservation has never been greater.

“As wildlife photographers who have spent our lives documenting the beauty and fragility of the natural world, we are acutely aware of the need to protect – not pillage – the living planet, which includes the animals we share it with.

“It is for this reason that we ask you to stop funding the slaughter of black bears for the Queen’s Guard’s caps.

“PETA has informed us that making a single ceremonial hat takes the hide of one bear who was gunned down by hunters.

“Some of the bears shot for the caps are mothers, and their orphaned cubs are left to starve, meaning one cap can actually represent the slaughter of an entire family.

“We understand that the Ministry of Defense (MoD) claims that the bear fur is the by-product of a ‘cull’ overseen by Canadian authorities – as though this would somehow make it OK – but both the federal and provincial Canadian governments say no such culls exist.

“Fur-farming was banned in the UK more than 20 years ago, so it’s unconscionable that the MoD continues to support the killing of bears for their skins overseas.

“Mr. Wallace, the only way bears should be shot is through a lens. And given the availability of high-quality, animal-free alternatives, there’s no longer any excuse for using the fur of slaughtered wildlife.

“We urge you to make the switch to humane faux fur, for which no one must be killed. Please, animals’ lives depend on it.”