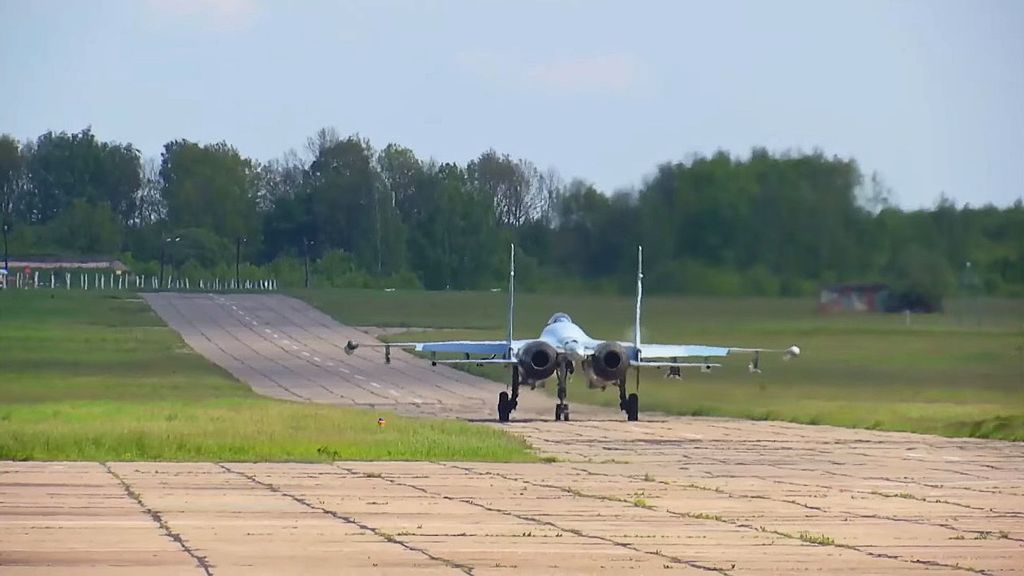 Su-35S and Su-30SM fighters destroy enemy military targets using a wide range of weapons in May 2022. (Ministry of Defense of Russia/Zenger).

The Russian Ministry of Defense has released these images allegedly showing combat sorties of some of its Su-35S and Su-30SM fighter jets.

One of the fighter jets can be seen taxiing down a runway at an undisclosed location before taking off.

After it takes to the skies, the images show five more planes taking off one after the other.

The footage then shows the view from the cockpit of one of the planes before switching to what appears to be the plane’s targeting system. It appears to lock onto its designated target for firing missiles.

It is currently unclear what the planes were targeting exactly. They can then be seen returning to base and landing on the runway before the footage ends.

The Russian Ministry of Defense (MoD) released the images on the evening of May 30.

Russian state media said that the images were filmed within the scope of the so-called “special military operation,” which is what the Kremlin is still calling the war in Ukraine.

The United Nations Office of the High Commissioner for Human Rights (OHCHR) has now confirmed 8,900 civilian casualties in Ukraine, including 4,074 dead and 4,826 injured. But the OHCHR believes that “the actual figures are considerably higher.”

This is because “receipt of information from some locations where intense hostilities have been going on has been delayed and many reports are still pending corroboration.”

The OHCHR said that information is still lacking regarding, for example, Mariupol in the Donetsk region, Izium in the Kharkiv region, and Popasna in the Luhansk region, where there are allegations of numerous civilian casualties.