Zenger News obtained the footage from the Ministry of Defense (MoD) of the Russian Federation earlier on Monday, May 30.
By William McGee May 31, 2022
Facebook
Twitter
Linkedin
Email 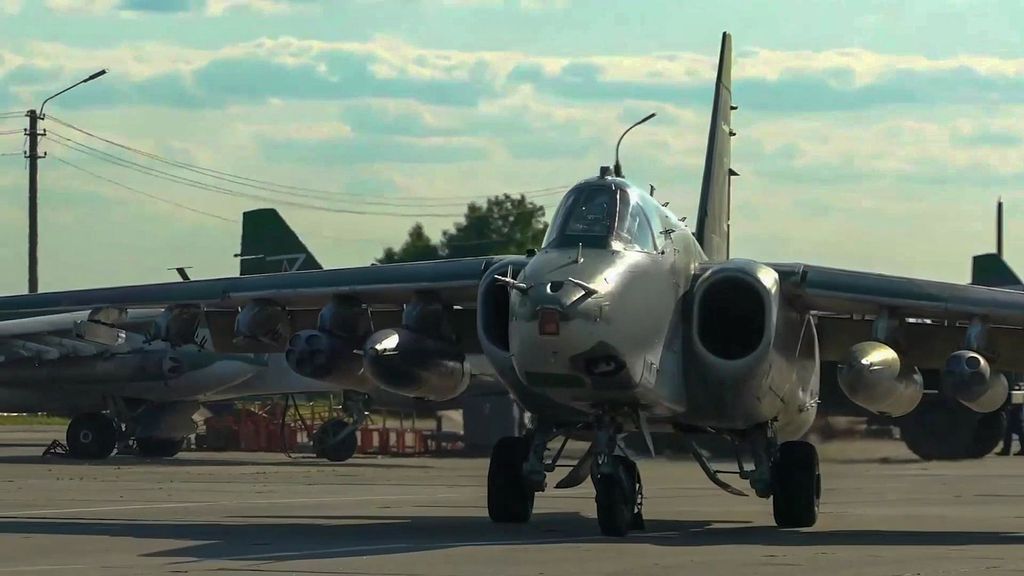 Released footage shows a pair of Russian warplanes being armed to the teeth before taking off and launching a plethora of missiles at several Ukrainian Army positions.

The footage opens with a row of trucks and warplanes parked on the runway and daubed with the notorious white ‘Z’ symbol.

The fighter jets are then seen being loaded with missiles before a pair take off and fly in close formation over fields and sparsely-populated settlements in Ukraine.
The jets are then seen performing dramatic maneuvers and firing several missiles at ground targets before returning to base.
Zenger News obtained the footage from the Ministry of Defense (MoD) of the Russian Federation earlier on Monday, May 30.

The Sukhoi Su-25 Grach is a subsonic, single-seat, twin-engine jet aircraft developed in the Soviet Union.

It entered service more than 40 years ago and is operated by the air forces of over 20 countries, including both Russia and Ukraine.

In its latest briefing earlier today, the Russian MoD said (also in English): “The Armed Forces of the Russian Federation continue the special military operation in Ukraine.

“The attacks have resulted in the elimination of more than 320 nationalists and 47 weapons and military equipment.

“In addition, 9 Ukrainian Smerch multiple-launch rockets have been intercepted near Malaya Kamyshevakha, Kamenka, Brazhkovka, Glinskoe in Kharkov Region and Chernobaevka in Kherson Region.

“Missile troops and artillery have hit 62 command posts, including those of Operational Command South near Novy Bug, Nikolaev Region, as well as 593 areas of AFU manpower and military equipment concentration and 55 artillery and mortar batteries at firing positions.

“In addition, more than 15 Ukrainian tanks and infantry fighting vehicles and 5 large-caliber artillery mounts have been destroyed as a result of artillery strike on a hangar on the territory of Okean shipyard in Nikolaev city.”