The mischievous pooch was finally found with the help of a heat-seeking drone in a wooden area near the village of Ridlington.
By Darko Manevski May 30, 2022
Facebook
Twitter
Linkedin
Email 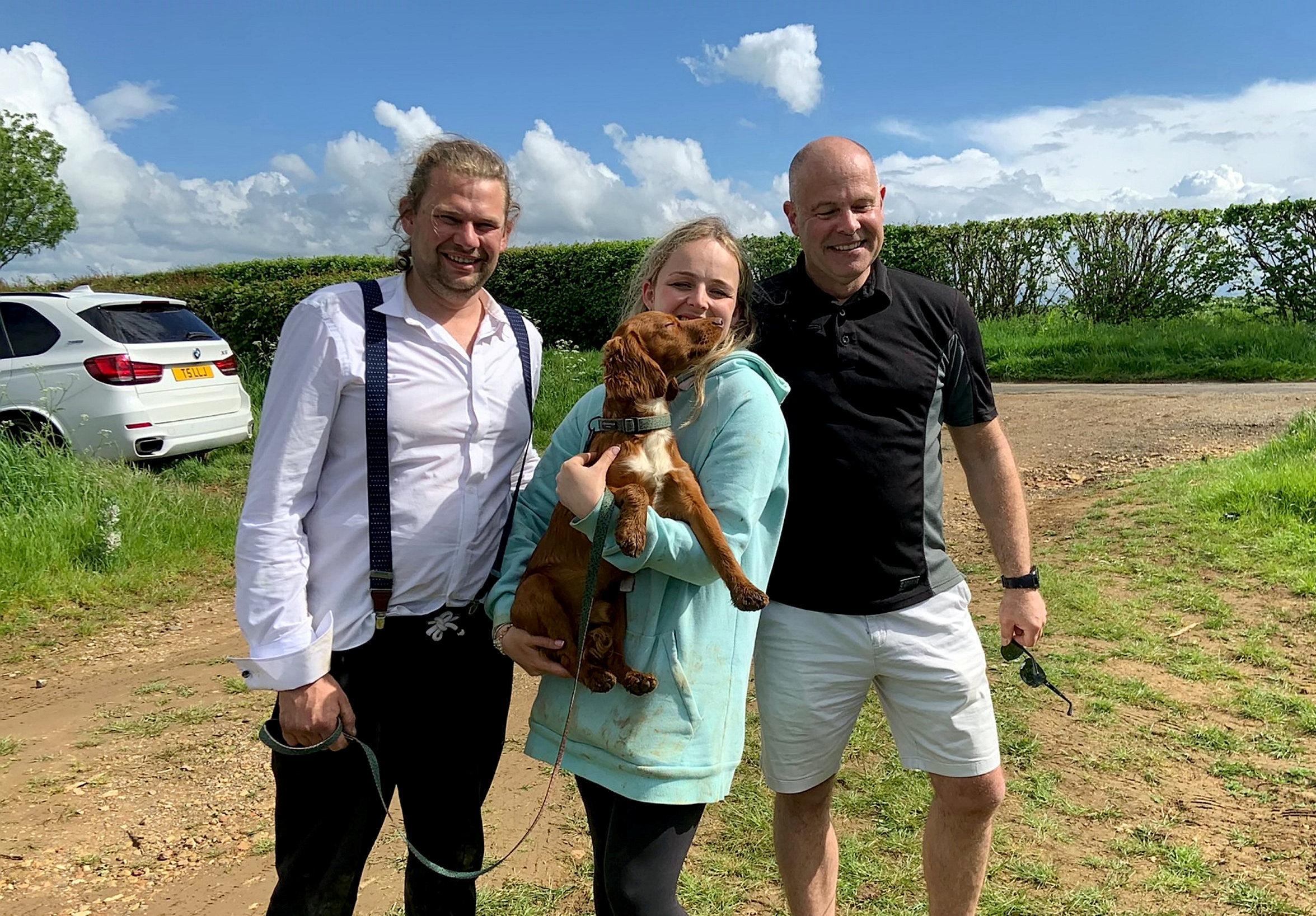 A newlywed couple spent their wedding day searching for their pet dog after he escaped while they getting married and went missing for 28 hours. (Steve Chatterley/Zenger)

A newlywed couple spent their wedding day searching for their pet dog after he escaped while they were getting married and went missing for 28 HOURS.

Rachel and Daniel Munday spent their first night as husband and wife sleeping in their car after cocker spaniel puppy Crash gave their dog-sitter the slip.

Members of the wedding party traipsed around fields in their suits and frocks as they scoured woodland in the pouring rain looking for the missing pooch on May 14.

The pair had tied the knot in the town Oakham, in the English Midlands county of Rutland, at 1 p.m. before their big day took an unexpected twist when the maid of honor was contacted by the dog-sitter.

Crash had been for a walk but refused to get back in the van before dashing off into nearby woods at around 11 a.m. while the couple were saying their vows.

By 4 p.m. family members, friends and guests all abandoned the celebrations to help look for missing eight-month-old Crash.

Rachel, 32, changed out of her flowing white-sleeved gown and into a hoodie and tracksuit bottoms while Daniel, 37, remained in his shirt and braces.

Crash was still eluding them by sunset and Daniel and Rachel ended up sleeping for two hours in their car for their first night as man and wife.

The following day they enlisted the help of a drone operator Phil James who specializes in searching for lost dogs.

The mischievous pooch was finally found with the help of a heat-seeking drone in a wooden area near the village of Ridlington, Rutland, at around 3 p.m.

Rachel, an administrative manager, from Cottersmore, Rutland, said: “It wasn’t how we expected are big day to go.

“Crash was with a dog-sitter who lived about half an hour away from us. She took him for a walk and off the lead like normal, and some dogs spooked him.

“He didn’t want to get in the van and ran away. He ran and crossed a road and went into a forest area.

“The day had been going so well, the rain was our only worry initially. We had our reception at Dan’s mom’s house. It was lovely.

“The dog-sitter called the maid of honor’s sister at first so not to disturb us and she went to help look for an hour.

“But then they knew they had to tell us and before we knew it 80 percent of the wedding party were out looking for Crash.

“I had a change of clothes there, which was lucky as I didn’t fancy ruining my wedding dress but I didn’t think too much about it at the time. I just wanted to find Crash.

“Everyone else was out and about in their wedding attire. My mom was in her mother-of-the-bride outfit, trawling through the woods.

“We later learned that was not the right thing to do, lots of people calling him. It probably only made him more scared.

“By the time it got dark we settled in for the night and slept in our car ready to resume the search when it got light again.

“We were really worried. Many times I was saying ‘am I in a dream?’ because it just didn’t feel real.

“I thought this isn’t supposed to be how I spend my wedding day. It was all so surreal.”

The search party was also joined by dozens of strangers after the family posted an appeal on Facebook.

Another dog sitter who joined the search suggested contacted Drone to Home, which is run by volunteer Phil.

Rachel added: “Phil came and checked two miles of open fields for us in two minutes.

“We knew what area he was in so he could position himself in that area. Phil was great, he came in with such confidence.

“We then had a sighting of him and then two minutes later my father-in-law called saying he was in the car.

“It absolutely threw it down that day but when we found Crash he was completely dry and fine – unlike the rest of us.

“We were just so relieved. We are so grateful to all the assistance we had from people. So many people offered to help.”

Crash was welcomed home with some wedding cake and was reunited with his half-brother, Bobby.

Daniel and Rachel now plan to make up for their lost celebrations by having a belated wedding barbecue.

Daniel, a managing director of a precision engineering firm, added: “I thought finding Crash was only going to take 10 minutes, that he would end up coming to the wedding reception, and it would be a funny anecdote.

“I didn’t have time to change my clothes when we set off looking, and the wedding gear wasn’t the comfiest. I’m covered in scratches and blisters.

“We feared the worst and were really scared.

“We are just so grateful to everyone that came to help.”

«Previous Post
Battle Of The Unbeatens: Gervonta Davis Versus Rolando Romero »Next Post
Chop Chop! – Woman Cuts Her Hair For First Time In 24 Years And Donates It To Charity