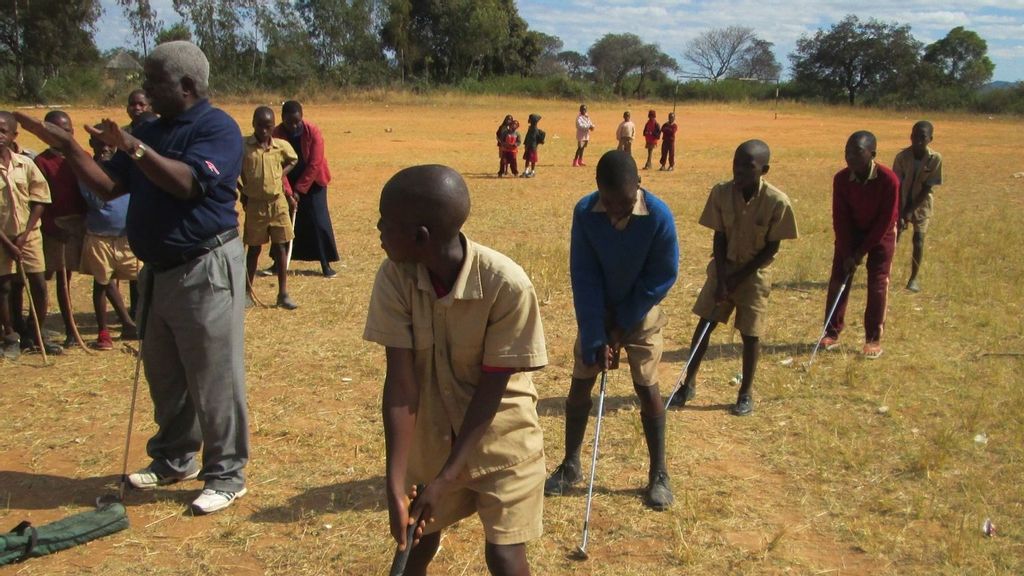 Tavenganiswa Mabikacheche, in dark-blue shirt at left, saw golf and the life skills it taught as a tool for rural development in his native Zimbabwe. (Mabikacheche Rural & Urban Sports Promotion Golf Foundation)

Tavenganiswa Mabikacheche had a singular passion: bringing golf to blighted rural communities of his native Zimbabwe, in Southern Africa.

In the wake of his death from COVID last year, his children — including two former U.S. collegiate-level golf players — are continuing his work.

When Mabikacheche was born in 1952, golf was a luxury of his country’s colonial elite. The oldest club in the country, then known as Southern Rhodesia, was established in 1895. Golf, like rugby, had been dominated by white players until majority rule began in 1980.

The Rhodesian Masters tournament was a showcase for talent not from within the country, but from apartheid-practicing South Africa, which won all but one competition from 1968 to 1978. (Apartheid was legalized in South Africa in 1948, and governed race relations in the country until it was dissolved over several years in the early 1990s. When in place, apartheid sanctioned racial segregation and political and economic discrimination against most nonwhites.)

Hence, when Mabikacheche took up the sport as an adult in the early 1990s, he was eager to further expand the sport to all people of Zimbabwe, regardless of race or socio-economic status.

By the time of his passing, the 68-year-old had dedicated more than two decades of his life to promoting golf development for underprivileged young people in Africa and instilled a love for the sport among his four children.

He was born in Chipinge, an agricultural village close to the border with neighboring Mozambique. Mabikacheche would rise from those humble origins to become a highly respected real-estate professional. It was then he realized that in Zimbabwe, as in other parts of the world, golf is a tool for business.

“My father realized without his own affluence, he would never have had access to the sport. So he set about providing opportunities for Zimbabwean youth,” said Tatenda Mabikacheche, his daughter.

And no obstacle was insurmountable.

To bring golf to the masses, wood clubs were fashioned in villages. Dried corn cobs became golf balls, while patches of fields were smoothed and holes created in the dirt. The vision wasn’t just to create star athletes, but to instill the values of hard work, patience and self-reliance the sport boasts.

That drive was instilled in his daughter, Tatenda.

Tatenda is one of a handful of young Zimbabwean female golfers to play collegiate golf. It was her passion for the sport that led the late Mabikacheche to recognize the non-inclusive environment that existed within the “gentleman’s game” in the country.

Though initially opposed to his daughters playing the game, Tatenda took up the sport at 13. By 16, she was the youngest black African woman to be certified as a golf rules referee. At 17, she joined the Zimbabwe women’s and junior golf teams. She competed in Asia and across Africa. It was one of the proudest moments of her father’s life when she announced she would be joining her brother in the United States on a golf scholarship at Ave Maria University in Miami, Florida.

Later, as a graduate student at the University of Virginia’s Darden School of Business, she organized a golf tournament in Virginia to benefit her father’s charity. Today, she is a consultant with McKinsey & Co.

The founding of the Mabikacheche Rural and Urban Sports Promotion by the elder Mabikacheche sought to lift the country’s golf expectations to the next level. It was a difficult moment for sport in the country. Some 60 golf courses disappeared in Zimbabwe during the 1990s and according to some sources, the number of registered players dropped from 7,500 in 2004 to just 3,000 in 2013.

Against these hardships, the sport notched a handful of notable successes.

Zimbabwe’s Lewis Chitengwa Jr. defeated Tiger Woods in the 1992 final round of the Orange Bowl junior championships. In the early 2000s, Nasho Kamungeremu, became the first black Zimbabwean to win a major golf title. His promising career was cut short when he passed in 2007 at age 34.

“Mabikacheche was the person who had the vision in the country to expand golf to the less privileged. He had a vision we will never see again in Zimbabwe’s golf program. His efforts produced five professional golfers — including myself, the first graduate in 2015,” said Zimbabwe’s Biggie Chibvuri, a rising star on the West African golf tour, whose move to Ghana this year was hailed by the Zimbabwean press as an important step in his professional career.

Since Mabikacheche’s passing, his children have sustained their father’s legacy. Though his four children live in four different countries, they continue to work together to expand golf in Zimbabwe.

Mabikacheche’s children and proteges in the Mabikacheche Rural and Urban Sports Promotion academy are taking up the cause he championed. They hope to build on his work in “Zim” to spread the role of golf for development to under-privileged communities across Africa.

“Golf was important to my father, not only because it was a sport that teaches discipline and integrity, but because he also saw it as a tool of social mobility. He imparted that wisdom to me, which has been the gift that has carried me to where I am today. I am dedicated to continuing his investment by promoting athletic talents in Africa,” says Tatenda.

Mabikacheche’s commitment to golf also helped to break down racial barriers in Zimbabwe.

His children and the supporters of Mabikacheche Rural and Urban Sports Promotion have built on that foundation by including a social enterprise element: a new driving range and golf pro shop to support the efforts of the charity.

As COVID restrictions have lifted across Zimbabwe, efforts to improve access to the sport in rural areas are set to resume.