Flaming Close: Firefighters Soak Land To Save City From Wildfire 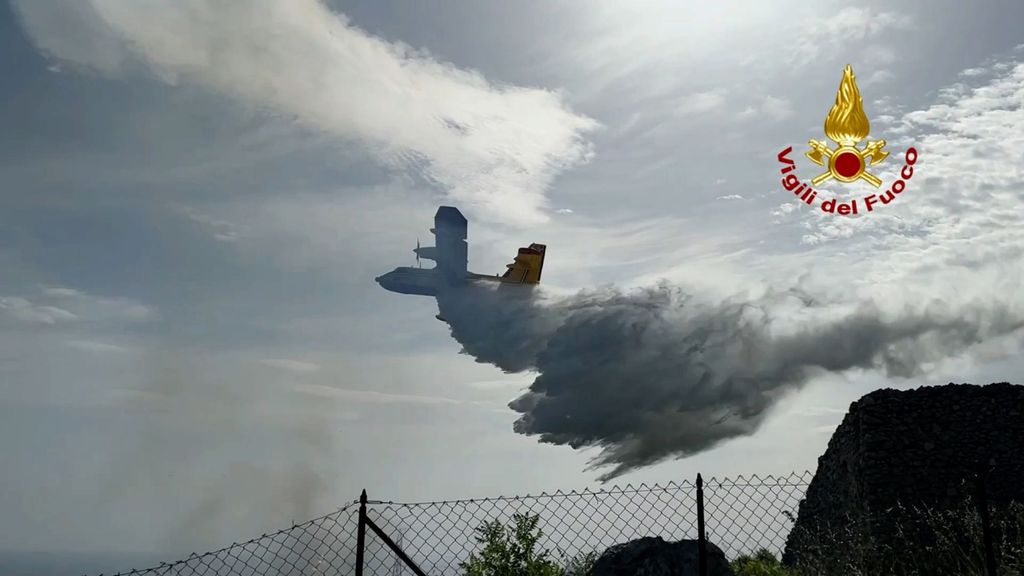 Firefighters staged a desperate stand against forest fires raging in Italy by soaking trees and grasslands to create a fire break.

Huge flames had threatened to engulf the Sicilian capital, Palermo, on May 25 before firefighters dumped thousands of gallons of water around the city.

Video footage of the battle shows tanker planes and helicopters bombing the ground with super-soaking water.

Other videos show burned-out buildings in fields of charred grass and crops and flames and smoke in the hills above Palermo.

Firefighters worked through the night to bring the blazes under control, reports local media.

The fires were fueled by the strong winds and a sudden heatwave.

The loss of forests globally has been raised as a key factor in global warming as trees take in carbon dioxide, offsetting some of the emissions that contribute to climate change.

But the growth in wildfires like this has prompted scientists to warn that all of that carbon in trees and forests worldwide could be thrown back into the atmosphere again if the trees burn up in a forest fire.

Trees also stop scrubbing carbon dioxide from the air if they die due to drought or insect damage, according to new research in Ecology Letters released earlier this month.

The likelihood of those threats impacting forests is increasing, making relying on forests to soak up carbon emissions a much riskier prospect.

William Anderegg, study lead author and associate professor in the University of Utah School of Biological Sciences, said: “U.S. forests could look dramatically different by the end of the century.

“More severe and frequent fires and disturbances have huge impacts on our landscapes. We are likely to lose forests from some areas in the Western U.S. due to these disturbances, but much of this depends on how quickly we tackle climate change.”

The researchers modeled the risk of tree death from fire, climate stress (heat and/or drought) and insect damage for forests throughout the United States, projecting how those risks might increase over the course of the 21st century.

By 2099, the models found, that United States forest fire risks may increase by between four and 14 times, depending on different carbon emissions scenarios. The risks of climate stress-related tree death and insect mortality may roughly double over the same time.

Anderegg says: “Climate change is going to supercharge these three big disturbances in the U.S.

“We’ve seen devastating fire seasons with increasing severity in the past several years. Generally, we expect the western U.S. to be hit hardest by all three of these. And they’re somewhat interconnected too. Really hot and dry years, driven by climate change, tend to drive lots of fires, climate-driven tree mortality and insect outbreaks. But we have an opportunity here too. Addressing climate change quickly can help keep our forests and landscapes healthy.”