In the basilica church is the place of Jesus’ death, known as Golgotha or Calvary, as well as his tomb, known as Holy Sepulchre.
By Martin M Barillas May 30, 2022
Facebook
Twitter
Linkedin
Email 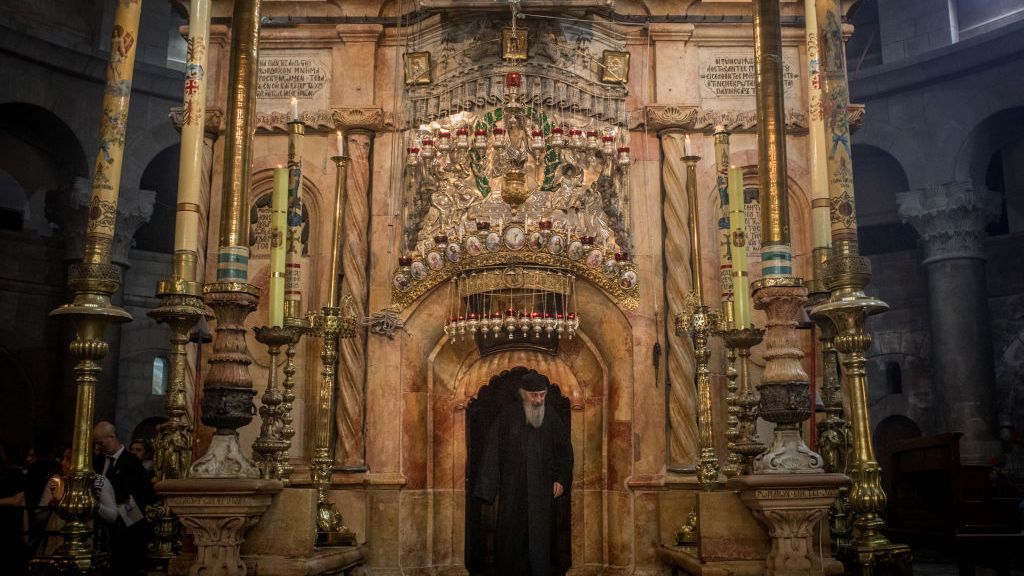 A priests leaves the entrance of the Edicule in the Church of the Holy Sepulchre on March 31, 2018 in Jerusalem, Israel. (Photo by Chris McGrath/Getty Images)

Following years of delay, restoration and archaeological excavation at the Church of the Holy Sepulchre will begin what experts believe may reveal secrets and churchmen hope will bring peace..

Representatives of three Christian communities were on hand to begin work of uncovering what lies beneath the tiled floor of the church, while also updating electrical systems, fire suppression, and plumbing of a building that dates back to the 4th century AD.

Greek Orthodox Patriarch Theophilos III, Custos of the Holy Land Fr. Francesco Patton, and the Grand Sacristan of the Armenian Patriarchate Archbishop Sevan Gharibian, were present at the groundbreaking.

In the basilica church is the place of Jesus’ death, known as Golgotha or Calvary, as well as his tomb, known as the Holy Sepulchre.

Fr. Patton, the Catholic custodian of the Holy Land monument, said during the March 14 event: “The pandemic slowed down the possibility of going ahead from the project to the execution, but now we are ready to start. In this historical context, with the pandemic and the war, cooperation on the restoration work takes on a different meaning, because this is the spot where Jesus becomes a cornerstone of the Church.”

The investigation and the restoration were due to 30 years of negotiations between the three faith traditions, which share joint authority over the basilica shrine that draws hundreds of thousands of pilgrims annually.

Renovation completed in 2017 allowed repairs to cracks in the church, but also revealed a monument built in the 12th century by the Templar knight crusaders.

Professor Francesca Romana Stasolla of Rome’s Sapienza University will conduct the archaeological study, which is expected to reveal the centuries of changes to the church – which partly dates to the time of Emperor Constantine.

During the restoration and study, the basilica – which is known formally as the Church of the Holy Resurrection – will be open while work on the floors will proceed in sections so that space is available to receive visitors and pilgrims.

Archbishop Sevan Gharibian, Armenian Apostolic Patriarch of Jerusalem, said: “I wish all the best to our communities for this project and to the technicians, who will certainly do their best to complete the work as best as possible.”

This new phase of restoration work seeks to restore the tile floor of the whole basilica and to secure the Edicule, which is the monumental shrine over the Holy Sepulchre itself within the basilica.

Prayers in Armenian, Greek, and Latin started off the ceremony, while the Greek Orthodox Patriarch said: “The restoration of the Edicule is a sign of hope for the world. We are profoundly grateful to all the experts who have made all this possible and it is our conviction that this will lead to an excellent restoration of the Rotunda of the Anastasis [Resurrection] which was begun years ago, and moreover the floor of the Basilica.”

Restoration of the floor will be complicated because the tiles date from different periods, and some may date to the time of Constantine the Great (272 – 337 AD), who ordered a church built there.

The work will be directed by Franciscan friars of the Custody of the Holy Land in cooperation with the Armenian Patriarchate and Greek Orthodox Patriarchate under the 1852 Status Quo agreement, which apportioned authority among them over the basilica and other holy Christian sites in the Holy Land.

According to experts, including Professor Giorgio Piras of Sapienza University, nobody knows what is beneath the pavement within the basilica, which has never before been excavated.

It is believed that archaeologists may find remnants of Constantine’s church, as well as a pagan Roman temple.

Experts will have to analyze and confirm the age of tiles from various areas in the church. The majority are believed to date from the 19th century, but others may have been left by Crusaders, and some in the so-called Prison of Christ may be from Constantine’s era.

In October 2016, previous work at the Edicule revealed what some believe is the actual burial slab on which the body of Jesus Christ had lain before his resurrection.

It is made of limestone and had been covered with marble cladding since at least 1555 or even before, probably to deter pilgrims from filching pieces of it.

Until the first century BC, a stone quarry operated at the site where the church now stands; traces of the quarry can be seen in chapels below the current church.

Starting in 135 AD, Roman Emperor Hadrian built a temple of Capitoline Jupiter on the site after a bloody suppression of a Jewish revolt led by Simon bar Kochkba.

Not long before his death, Constantine ordered the construction of the church built as a rotunda with the holy tomb at its center.
Persian invaders burned the church in 614, and it was restored by Christians.

In 1009, it was nearly razed by the Muslim caliph of Cairo.

However, in 1099 after the establishment of the Crusader kingdom in the Holy Land, work on the site recommenced and the church in its current form was consecrated in 1142.

Worship and work at the basilica has not been without controversy.

In 2008, a scuffle broke out between Armenian and Greek clerics during a religious procession at the basilica; Israeli police entered the church and broke up the fistfight and arrested two clergymen from each of the two Christian communions.

Another such brawl broke out in 2011 when Armenian and Greek clerics were cleaning the basilica and accused each other of encroaching on their respective jurisdictions; fists and brooms were exchanged until Israeli police interrupted the proceedings.