The House Speaker said church leaders take no action against those who push for the death penalty, which violates its teachings.
By Clemente Lisi May 27, 2022
Facebook
Twitter
Linkedin
Email 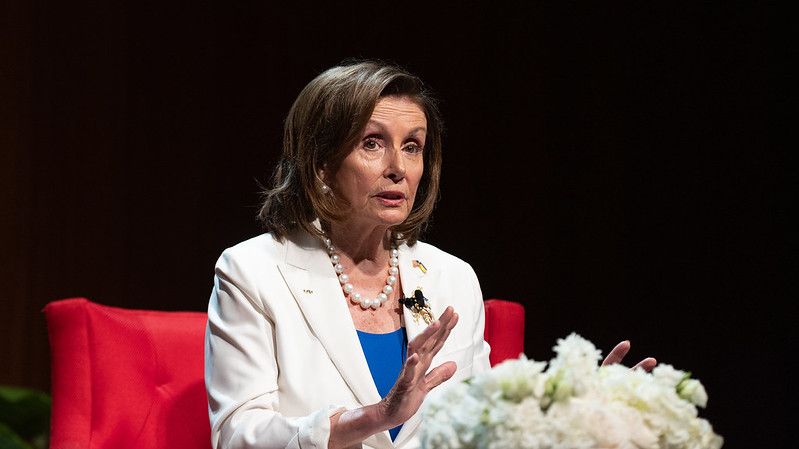 “I think it’s very insulting to women to have their ability to make their own decision hampered by politics, said House Speaker Nancy Pelosi. (LBJ Presidential Library)

She suggests he is applying a double standard by banning her from receiving Holy Communion because she supports abortion rights.

“I wonder about the death penalty, which I’m opposed to. So is the church. But they take no actions against people who may not share their view,” the California Democrat said during an appearance Tuesday on the MSNBC show “Morning Show.”

The comments come after Cordileone notified Pelosi of his decision on May 19, saying he made the determination “after numerous attempts to speak with [Pelosi] to help her understand the grave evil she is perpetrating.”

“I have determined that the point has come in which I must make a public declaration that she is not to be admitted to Holy Communion unless and until she publicly repudiates her support for abortion ‘rights’ and confess and receive absolution for her cooperation in this evil in the sacrament of Penance,” he wrote in a letter posted to the archdiocese website.

The move comes after it was revealed earlier this month in a leaked draft decision that the Supreme Court is poised to roll back Roe v. Wade, the 1973 decision that made abortion legal throughout the United States.

“I think it’s very insulting to women to have their ability to make their own decision hampered by politics. It should have never been politicized.” @SpeakerPelosi to @Morning_Joe on the possibility of overturning of Roe v. Wade.

Pelosi, like many in her party, openly support abortion rights. President Joe Biden, who is also Catholic, has joined Pelosi in calling for expanding federal abortion rights to protect women once a decision is made public.

“We just have to be prayerful, we have to be respectful. I come from a largely pro-life Italian American Catholic family, so I respect people’s views about that. But I don’t respect us foisting it onto others,” Pelosi told MSNBC. “Our archbishop has been vehemently against LGBTQ rights. He led the way in some issues, an initiative on the ballot in California.”

Pelosi added the pending Supreme Court ruling regarding abortion “is very dangerous in the lives of so many of the American people. They’re not consistent with the Gospel of Matthew.”

Politico reported that Pelosi attended Mass this past Sunday in Washington, D.C., where she received Communion, a Christian sacrament in which consecrated wine and bread are consumed as reminders of Jesus’ death. She was spotted at Holy Trinity Catholic Church in Georgetown, a parish where Biden has also attended Mass.

Catholic archbishops have power within their diocese, but Cordileone’s edict does not extend outside his geographic jurisdiction.

The Archdiocese of Washington has not publicly commented on the Pelosi ban. The archdiocese’s communications office erroneously told a reporter on Monday that media requests related to the House Speaker’s denial of Communion “will be ignored.”

A reporter writing for the Washington Examiner had contacted the Archdiocese of Washington, led by Cardinal Wilton Gregory, for comment since Pelosi spends much of her time in the nation’s capital. The reporter received an emailed response from the communications office in error.

A follow-up email to the publication for clarification read: