On Monday, May 23, the little queen got the chance to visit Queen Elizabeth’s royal residence in London.
By James King May 26, 2022
Facebook
Twitter
Linkedin
Email 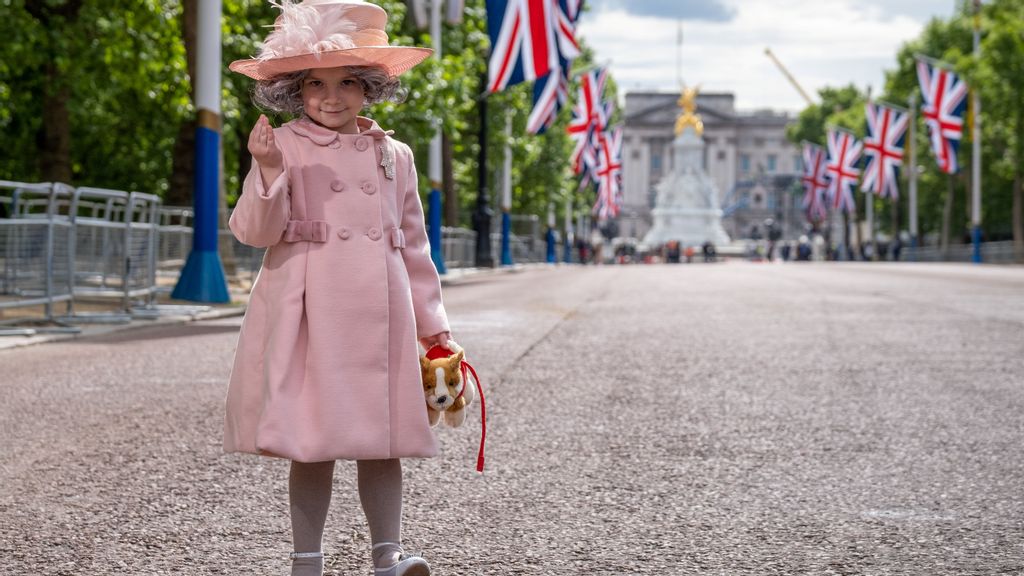 An adorable three-year-old girl delighted OAPs by dressing as a 'mini-queen' and paying 'royal' visits to care homes. (Douglas Whitbread/Zenger)

An adorable three-year-old girl who delighted retirees by dressing as a ‘mini-queen’ and paying ‘royal’ visits to care homes has taken her first-ever trip to Buckingham Palace.

Little Isla Bates undertook several “royal engagements” across the north of England to celebrate the Platinum Jubilee of Queen Elizabeth II, where she walked down a red carpet and perfected her regal wave.

But on Monday, May 23, the little queen got the chance to visit Queen Elizabeth’s royal residence in London, where she wore her signature salmon pink outfit – charming passers-by.

Isla’s mother, Alex Fairhurst, said it was a “once in a lifetime” chance for the tot to visit the palace dressed in her smart coat and hat, with a pearl necklace and matching shoes.

And for full effect, she also donned her signature wig, with greying hair, leading scores of enthusiastic tourists to ask for photos with her.

Alex said: “It was a special day for her. It was a once-in-a-lifetime opportunity, especially so close to the jubilee – and being dressed as a mini-queen!

“There were lots of people coming over who wanted pictures, and we got as close as we could to the palace.”

Isla said she was thrilled to finally set her eyes on the real queen’s residence.

She said: “I was so excited to see the palace. It was my first time ever in London!”

As part of The Queen’s Green Canopy initiative, Isla has used her time as the mini-queen to plant trees at care homes dotted around Stockport in metropolitan Manchester in central England.

The project, which was introduced for the jubilee year, is designed to enhance the environment and create a legacy in honor of the queen’s leadership of the nation.

And at Bramhall Manor, in Stockport, three residents – John Rankin, Richard Dixon and Eric Norcross – helped Isla plant a tree, which was followed by a traditional tea party.

Alex, from Wigan, Lancastershire, said: “Isla thoroughly enjoyed her time at Cheadle Manor and Bramhall Manor, and especially loved dressing up as the Queen.

“It is a real privilege for Isla to be involved in the Platinum Jubilee and by planting the tree: she is playing her part in improving the environment and leaving a lasting legacy in Stockport,” Alex said.

Rowena Bolton, home manager at Cheadle Manor, part of the New Care group, added: “The residents were thrilled to have a mini-Queen for the day and enjoyed the celebrations.

“There were smiles all round!”

Isla also said she had loved bringing a grin to the faces of care home residents.

She said: “I have loved being a mini-Queen and helping to plant all of the trees. I like waving and making the residents smile.”

Isla’s incredible part as the mini queen is one of many fun and quirky events that are being held up and down the country during Elizabeth’s Platinum Jubilee year.

The monarch first came to the throne on February 6, 1952, and has served the United Kingdom and the Commonwealth for the last 70 years.

And during the extravaganza, she watched performances by the Household Cavalry and saw acts from comedian Omid Djalili and singer Gregory Porter.

Despite concerns surrounding her health, the 96-year-old monarch made a surprise public appearance last week to open the new London “Elizabeth Line” of the city’s underground rail system.

The Queen paired a sunshine yellow Stewart Parvin double-wool crepe coat with a matching hat and a diamond brooch designed in Singapore while walking aided with a cane.

She was joined by her youngest son, Prince Edward, the Earl of Wessex, for the official visit, with Prime Minister Boris Johnson commenting that it was “fantastic to see her.”