In the video, the People’s Militia organized a meeting between the captured soldier and his mother. 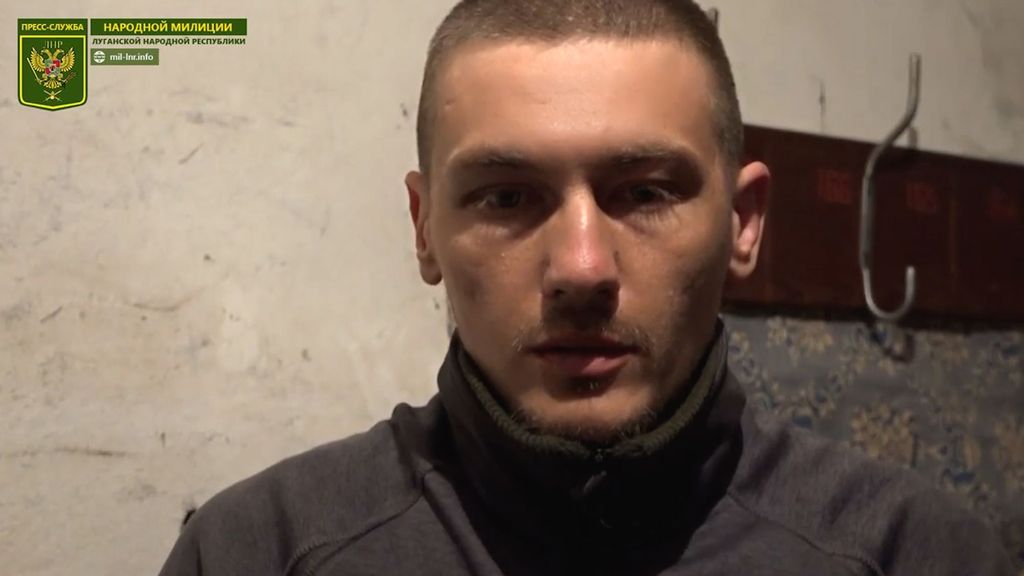 Captured militant of the Armed Forces of Ukraine Alexander Koltovich, a native of Lugansk. (People's Militia of the LPR/Zenger).

This footage shows a captured Ukrainian soldier being allowed to see his mother at the prison camp where he is being held.

Alexander Koltovich, from the city of Luhansk in the so-called Luhansk People’s Republic (LPR) in eastern Ukraine, joined the Ukrainian Army at the start of the Russian invasion and was captured by soldiers of the pro-Russian People’s Militia of the LPR.

The militia posted a video of the Luhansk native being quizzed by a pro-Russian soldier about his ‘loyalties’ before being allowed to see his mother for the first time since being captured.

In the footage, a narrator says: “Here are more surrendered soldiers from the Lviv region, held correctly in captivity. Contrary to the horror stories of Ukrainian propaganda, with hot meals and medical care available.

“Among the newcomers, Alexander Koltovich is most interesting. He is a big patriot of his native Luhansk, and he left his city and mother back in 2014.”

Koltovich says to the camera: “In 2014, I was offered a job in Zaporizhzhia, from there I was transferred to work in Lviv.

“In Lviv on 20th March this year, I was recruited and mobilized in the 125th brigade of the territorial defense of Lviv.

“Me and several people from different battalions were transferred. At first we were supposed to go to Rubizhne, and then everything changed.

“They said we would go somewhere. We were dropped off in or near Vrubivka in a residential building in the basement, and there they said to wait for further instructions.

“Our commander went to the headquarters and when he returned he said that we had to fight.”

Interviewer: “You are native of Luhansk and left in 2014, right?”

Interviewer: “What kind of patriot are you? Didn’t you understand that the war has been going on here for eight years? Your mother is here! Didn’t you feel embarrassed when you were taken to the rival army?”

Koltovich: “I was not going to fight in the army, we were told we would not take part in the fighting, and in Lviv it was the same.

“When it was revealed we were moving into the Luhansk territorial region, we wrote a note that we did not want to take part in this. It did not work.”

Interviewer: “Eight years! Your hometown was shelled for eight years. I see you are a patriot, you have a tattoo of your city.”

Koltovich: I really love the city of Luhansk.”

Interviewer: “So what were you doing in Ukraine for eight years? Loving from a distance?”

Koltovich: “I’m not a military man, I don’t know how to fight, I can’t be useful in combat operations.”

Interviewer: “Why didn’t you stay in Luhansk? You have a mother in Luhansk.”

Interviewer: “In short, you sold your homeland! Well, the next question is, what is the state of the Ukrainian army? What did you see?”

Koltovich: “What I saw was low-level. Because there is no equipment, people don’t have any desire to fight because the forces of the Ukrainian army are in a very bad situation now with commanders, weapons, and equipment.”

In the video, the People’s Militia organized a meeting between the captured soldier and his mother.

Koltovich tells his mother: “I love you and want to apologize. I don’t know if you can ever forgive me, but I want to apologize for the fact that you and I are seeing each other now like this, it should not have happened like this.

“It is terrible that you and I see each other in this way, it is like a nightmare.”

His mother says: “We all love you very much, all of us. No one has rejected you. No one!

“Everyone is waiting for you at home, I just want to ask you, why did it happen like this? Why didn’t you just come home? Leave everything and just come, but not this way! Return, but not like this!”