Dr. Tirej Brimo arrived in Britain in 2013 after fleeing Syria's civil war while he was in his final year of medical school.
By Darko Manevski May 26, 2022
Facebook
Twitter
Linkedin
Email 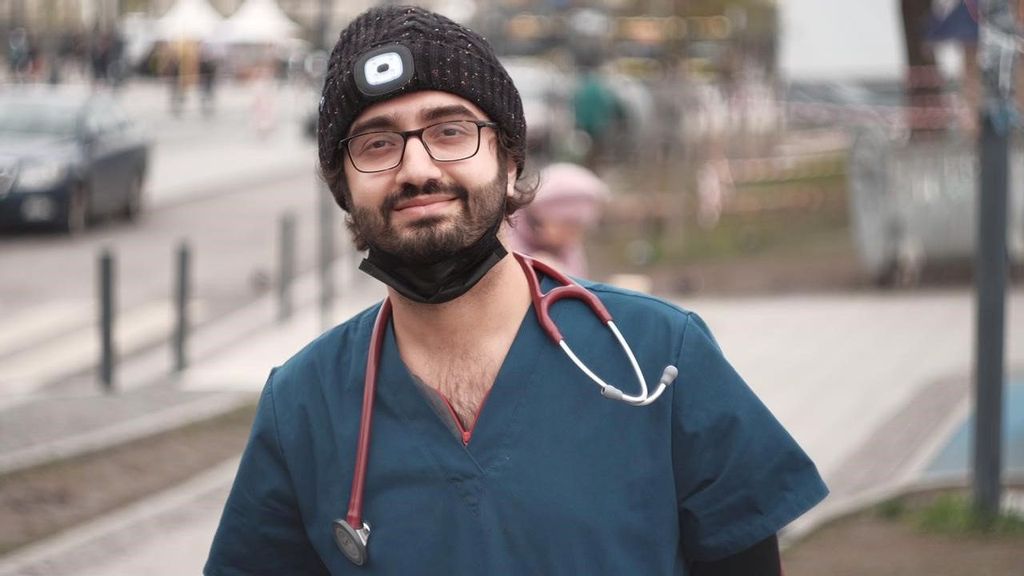 A Syrian refugee who fled to the UK and qualified as a doctor nine years ago is now using his annual leave - to treat Ukraine refugees and war victims. (Matthew Newby/Zenger)

A Syrian refugee who fled to England and qualified as a doctor nine years ago is now using his annual leave to treat Ukraine refugees and war victims.

Dr. Tirej Brimo arrived in Britain in 2013 after fleeing Syria’s civil war while he was in his final year of medical school.

Now, he has chosen to “stand up for what he believes in” by treating hundreds of patients in Ukraine as part of a volunteer medical team.

Dr. Brimo, who is now a fully qualified emergency doctor at Addenbrooke’s Hospital in Cambridge, said: “In Syria I ran away. I was a student and felt helpless.

“In Ukraine, I chose a different destiny. I chose to be there and stand up for what I believe in.”

Dr. Brimo used his annual leave to volunteer for seven weeks on the Ukraine/Poland border and in Ukraine’s western city of Lviv.

He helped establish a medical clinic near Lviv’s main train station, where thousands of refugees passed through as they fled fighting in the east of the country.

Dr. Brimo, who has since returned to Cambridge, described the war in Ukraine as “a nightmare you can’t wake up from”.

He said: “At Lviv train station, the situation was horrid.

“Every day we got dozens of trains from Eastern Ukraine – trains full of injured people, and trains full of refugees who just wanted to flee and leave everything behind.

“In my very first week, a paramedic and I saw 339 patients.

“It only took a few seconds into the consultation for these emotions to come out. They had been through a lot, they had seen a lot.

“Some of them lost their loved ones, some of them left everything behind, and some of them were so in shock that they were not aware of what was happening around them.”

Drawing comparisons to the Syrian conflict, Dr. Brimo, who is Kurdish, added: “Sadly, the atrocities of war are similar.

“The horror in peoples’ faces, backpacks that have been filled in a rush, and children who have lost their spark, are some of the images that stay with me.

“War is like a nightmare you can’t wake up from while praying for a miracle that just doesn’t happen.”

Dr. Brimo, who initially fled to Lebanon before arriving in the United Kingdom, graduated as a doctor at St. George’s Medical School in London in 2017.

He has volunteered in refugee camps on the islands of Greece several times since his graduation as a doctor.

Dr. Brimo said: “As a doctor in the humanitarian world, our fight is different.

“We look after those wounded by all kinds of trauma, those who have been forgotten about, those who feel rejected by life and its atrocities.

“We hope that these few minutes of care will one day be remembered as a small light in our patients’ journey. Their journey to heal from all that happened.”

Reflecting on his work in Ukraine, he added: “Amid this difficult situation hundreds of good-hearted volunteers tried their absolute best to make life a little bit easier for their fellow humans.

“I am grateful to my emergency department colleagues at Addenbrooke’s hospital. Their support and understanding of my need to fulfill my humanitarian duties have been enormous.

“And now that I am back in the UK, I am ready to give 100 percent to my department, my hospital and the NHS.”

«Previous Post
Bombs Away: Explosions All Around An Idyllic Coastal Village As Defenders Blast Russian Tank»Next Post
Bee-lieve It Or Not: Organic Farming Not Always Best Option For Bees, Study Shows