It also leaves a void that will be filled by sites often motivated by politics rather than faith. 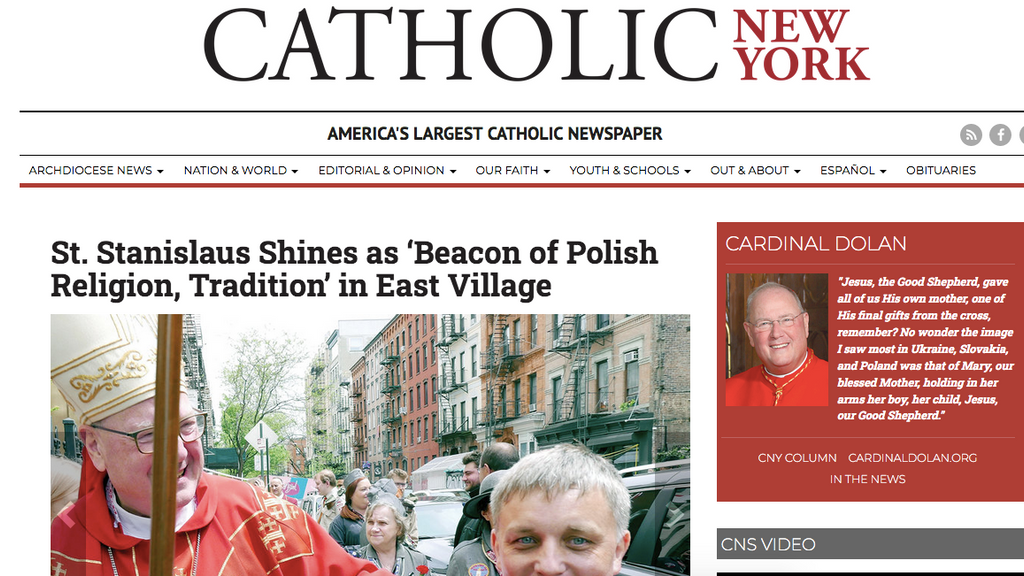 The Catholic press — in print, online and television — is one of the most active and vibrant in the United States. But its status is changing.

Though well-funded and important to understanding Catholicism, the changing journalism landscape, spurred on by the internet, has made it tough for even religious media to thrive.

Catholic New York was one of the publications that used CNS stories. That connected the two. Also, both news organizations were run by the church hierarchy. CNS, founded in 1920, is a wire service, with reporters and editors, that wrote up stories for subscriber newspapers across the country. The other, Catholic New York, was the official newspaper of the archdiocese and one of the largest of its kind in the country in terms of geographical reach and circulation.

CNS announced two weeks ago that it was shutting down a main part of its operation in “a dramatic reorganization of its communications department” — including the closure of the Washington, D.C., and New York offices.

In meetings with newsroom staff, James Rogers, the chief communications officer of the United States Conference of Catholic Bishops, said the Washington office would be closed at year’s end. The Rome bureau will remain open and continue to report on the Vatican.

A statement released by the bishops’ public affairs office added: “Over the next few months, the USCCB Department of Communications will undertake a significant realignment to better utilize the resources entrusted to the Conference by the faithful in a manner that fits the communications environment today.

“Sadly, this will impact a number of staff. We are grateful for the time and dedication of the committed team of communicators at the Conference who serve the Church; job transitions can be difficult, and as this is a personnel matter, further detail will not be discussed at this time.”

On the heels of that announcement in early May, Catholic New York, founded in 1981, said on May 19 that it would cease operations. The award-winning biweekly newspaper will publish its final issue on November 17, as the archdiocese said it is moving toward unveiling a new digital communications program.

It has yet to announce what that will be, but set a timeline for its launch as early as 2023.

Msgr. Joseph LaMorte, vicar general and moderator of the curia, and John P. Cahill, chancellor of the archdiocese, said he would work with staff “during this period of transition and will help them find new positions in the archdiocese wherever possible.”

The move signals a major shift for CNS and Catholic New York, two of the church’s biggest news organizations. It’s possible the bishops have done a poor job keeping up with what Catholics in the United States — both on the doctrinal left and right — want to read. It also leaves a void that will be filled by sites often motivated more by politics than faith.

Tom Dermody, the editor of Peoria’s Catholic Post, told America magazine that a lack of information as to how the USCCB plans to fill the content void adds uncertainty to an already stressful publishing environment.

“It is difficult to imagine no longer having the good work produced by its domestic operations as a foundation for what we do to keep our readers inspired and informed,” he said. “And not knowing what the USCCB is planning to offer to fill the void in a reorganized communications department adds to the concern of many of us.”

Closing CNS will “have a terrible practical effect because diocesan newspapers and websites across the country depend on CNS content to fill out their page with news about the church in other dioceses and around the world,” said David Gibson, director of Fordham University’s Center on Religion and Culture.

“Like their secular counterparts, local Catholic media have fewer resources to cover church news, and while those dioceses can ill-afford to pay for Catholic News Service, shutting CNS’ domestic operations is akin to cutting off your town’s newspaper from the Associated Press and Reuters wire feeds. Their already-thin offerings would shrink even further,” he said.