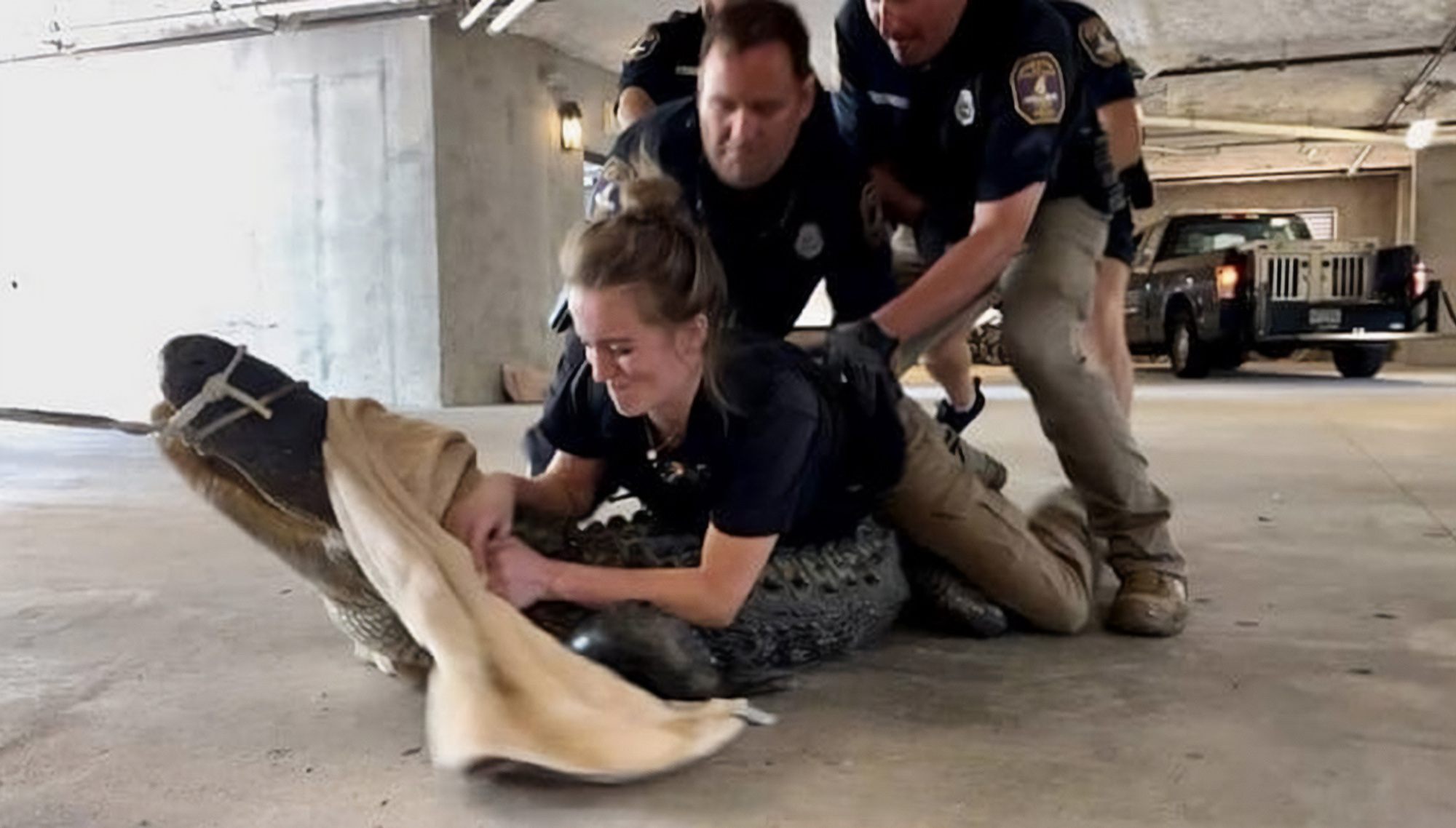 This is the moment heroic cops leap on a lost ‘gator as a video shows the voracious reptile roaming in a city parking garage.

Officers seized the huge beast in Charleston, South Carolina, over the weekend.

The police said they successfully placed the alligator into custody before “safely relocating” it.

The City of Charleston Police Department (CPD) said on May 23rd: “Fa-GATOR-bout it! The brave women and men of CPD’s animal control, harbor patrol, and Daniel Island patrol encountered another lost alligator over the weekend.

“They got this big guy safely relocated out of a parking garage!”

The police department accompanied the post with the hashtags ‘see ya later alligator’, ‘dedicated investiGATORS’, ‘this is becoming a thing’, and ‘cuff him’.

In the footage, five cops are seen leaping onto the alligator, already blindfolded and restrained with rope, in the parking garage.

Meanwhile, at least one resident is seen filming the capture on his phone near the entrance.

Officers close the alligator’s mouth and use duct tape to keep it closed while applying their body weight to its bulky body to prevent it from thrashing around.

They then move its little forelimbs behind its back and suggest “handcuffing” the animal with duct tape.

It is unclear if the reptile was charged with committing an offense before being released.

Popular knowledge indicates that they are more active in the spring as they seek mates, yet in 2020 Eli R. Beal and Adam E. Rosenblatt from the University of North Florida investigated the potential effects of urban land use on alligators through surveys of relative alligator abundance in nine tributaries of the lower St. Johns River within Jacksonville, FL.

They found that in a total of 93 alligator sightings during nighttime spotlight surveys across time and space the summer season contained the most alligator sightings. They encountered fewer animals in the spring season and even fewer in the fall and winter.

Surprisingly, only one of 93 sighted individuals was an adult.

Hunting and nuisance alligator data that they collected suggested that adults were relatively rare in Jacksonville because they have been targeted for removal.

Thus, smaller alligators still occupy urban habitats because they are not targeted and face no competition from adults.