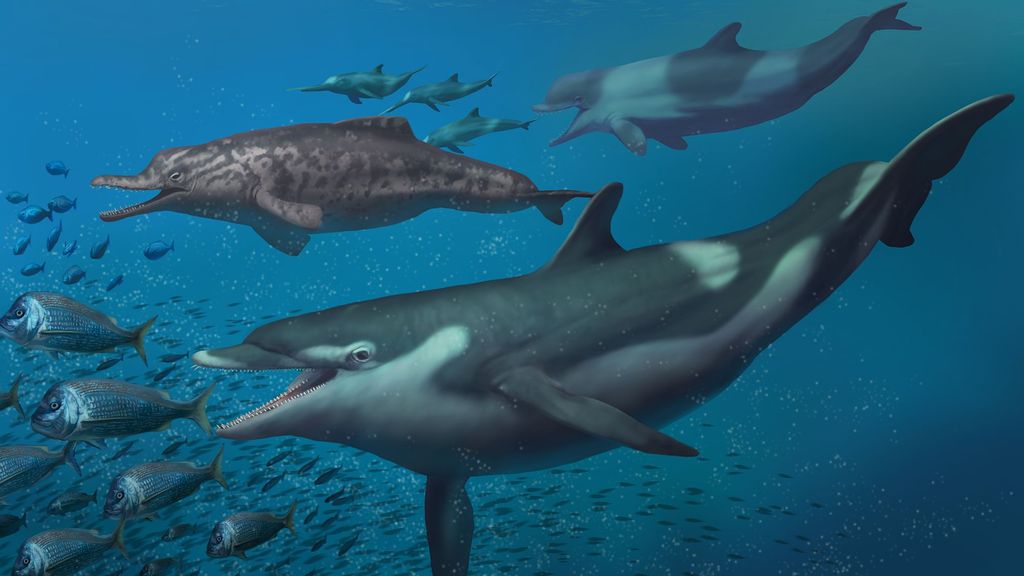 Life restoration of the dolphins described in this study: Kentriodon in the foreground, in the background a squalodelphinid (left) and a physeterid (right) chasing a group of eurhinodelphinids. (Jaime Chirinos/Zenger)

Paleontologists at the University of Zurich said they used fragments of ear bones, teeth and vertebrae to determine the characteristics of the two species. They added that the types were related to sperm whales and oceanic dolphins living today.

Twenty million years ago, the small Central European country’s Mittelland region – or Swiss Plateau – was an ocean in which dolphins swam.

As the climate became warmer, sea levels rose and flooded the low-lying areas of Europe. Switzerland was part of an island landscape at that time. The area was populated by fish, sharks and dolphins. Mussels and sea urchins were living on the seabed.

Researchers at Zurich’s paleontology department have now examined around 300 fossils of whales and dolphins dating from this period.

The country’s major natural history and paleontology collections mostly contain fragments of ear bones, teeth and vertebrae that were found in the so-called Upper Marine Molasse.

Zurich University paleontologist Gabriel Aguirre-Fernandez explains: “This indicates that strong currents dragged the animal skeletons across the ocean floor and scattered the bones.

“For research purposes, the most interesting remains are the bones from the inner ear, as they allow individual species to be classified. The problem is that these types of bones are less commonly found.

“Nevertheless, we managed to identify two families of dolphins previously unknown in Switzerland.”

The expert on oceanography and marine biology explained that micro-computed tomography, which makes cross-sectional images without destroying the fossils, had been used to reconstruct the softer organs around the hard ear bones.

Aguirre-Fernandez adds: “We created 3D models of the ears. This helped us better analyze the dolphins’ hearing ability.”

The Swiss Plateau is one of Switzerland’s three major landscapes. It is situated between the Jura Mountains and the Swiss Alps.

It covers around 30 percent of Switzerland’s surface area. It is partly flat but mostly hilly. The average altitude is between 1,300 and 2,300 feet.

It is the most densely populated region of Switzerland and its economic center.

Dolphins are aquatic mammals. They range in size from the 5 foot 7 inch long Maui dolphin to the 31 foot-long orca or killer whale.

Dolphins have streamlined bodies and two limbs that are modified into flippers. Some dolphins can briefly travel at speeds of 18 miles per hour or leap about 30 feet.

They have well-developed hearing which is adapted for both air and water. It is so well developed that some can survive even if they are blind.

Dolphins are widespread. Most species prefer the warm waters of the tropic zones, but some, like the right whale dolphin, prefer colder climates. Dolphins feed largely on fish and squid, but a few, like he orca, feed on large mammals such as seals.

The sperm whale is the largest of the toothed whales and the largest toothed predator. It is a mammal with a worldwide range that migrates seasonally for feeding and breeding.

Zurich University’s paleontology department was founded in 1956. It currently organizes eight research projects with different scientific aims all over the world, including Morocco, Venezuela and South Africa.