A veteran athlete and social media influencer boasts his incredible skills in a video where he launches himself off a cliff.
By Pol Fernandez May 25, 2022
Facebook
Twitter
Linkedin
Email 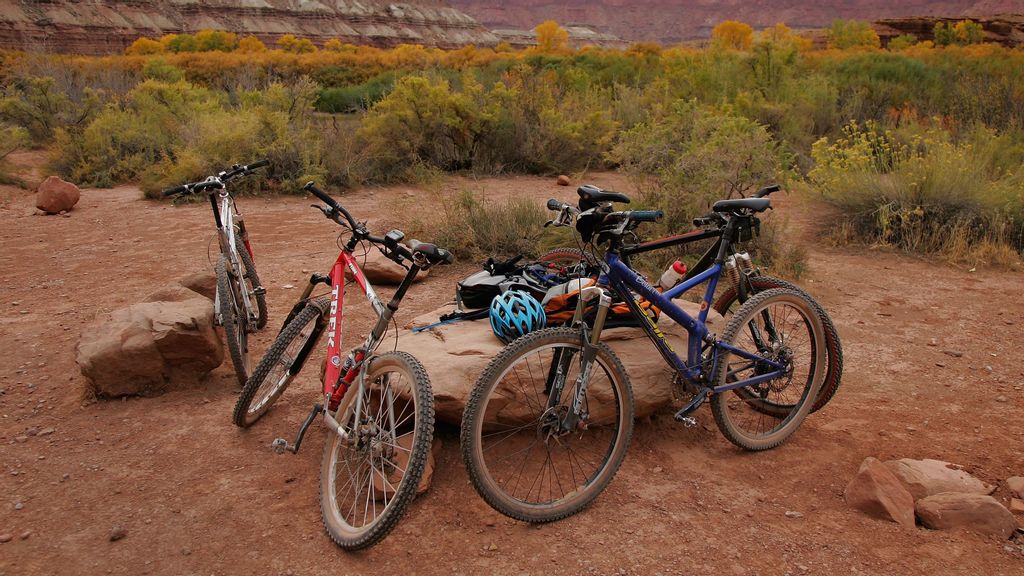 Mountain bikes get a well deserved rest at the Hardscrabble campsite on the White Rim Trail on October 27, 2007 in Canyonlands National Park, Utah. (Photo by Doug Pensinger/Getty Images)

A veteran athlete and social media influencer recorded a video of a death-defying stunt as he launched himself and his bike off a cliff and onto a waiting wooden ramp.

Max Grayston, 29, posted his video on his @motomaxcanda Instagram account that shows him first approaching the edge of a rocky cliff in the midst of a forest in western Canada.

The edited video shows how he then jumps between two trees just feet apart, vaults over a gully, and lands on a rough wooden ramp dozens of feet below.

The video was shot near Whistler, a resort area in British Columbia, on May 10.

The triumphant Grayson can be heard at the end of the video shouting: “Yeah, baby, yeah!
Grayston told Zenger News: “I own that video and it was 100 per cent self-shot solo with two GoPros!”

Referring to the rough patch of ground where he did his stunt near the Whistle Mountain and Blackcomb Mountain ski resorts north of Vancouver, he said: “I had never seen the feature before and was going to look at it to come back and film another day.”

He added: “But when I was looking at it I could see it working out and decided to just do it then and there solo!”

Grayston is sponsored by manufacturer Intense Cycles, and started mountain biking in 2017 when he moved to Whistler.

In 2018, he participated in the Downhill BC Premier Series at Whistler Mountain Bike Park, one of the most challenging contests in mountain biking.

Grayston recorded a video to audition for Pink Bike Academy – a TV series that features 10 aspiring professional mountain bikers who compete in a series of challenges at the Big White course in British Columbia as they hope to win thousands of dollars and a chance at going pro.

The 2018 video showed how he hurtled down snaking trails in the heavily forested Whistler bike park, negotiating hair-pin turns at phenomenal speeds.

In it, he says: “In my short time mountain-biking, I’ve found my true love and passion for the sport. It would mean the world to me to be accepted by the Pink Bike Academy.”

The video also showed Grayston as he did indoor flips and stunts on a prepared course.
Asking to be chosen by Pink Bike Academy he said that winning would be “the ultimate opportunity to prove to myself and the team that I have what it takes to be contender at the global level.”