Murat Zhurayev and Kamilla had been posing for their wedding photos when the groom scooped his bride into his arms.
By William McGee May 25, 2022
Facebook
Twitter
Linkedin
Email 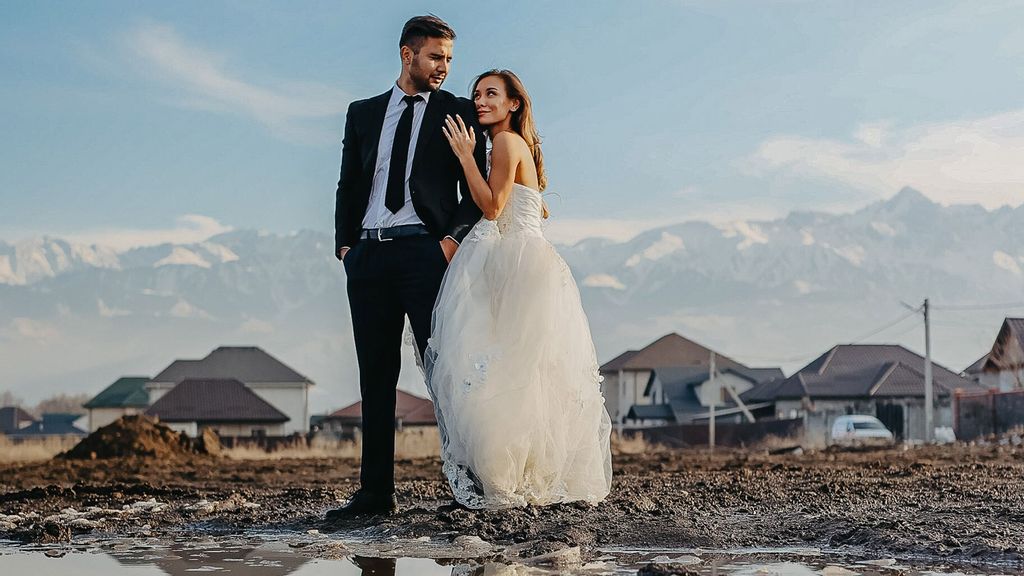 The couple, Murat Zhurayev and Kamilla, were featured in a viral Instagram post by their wedding photographer, Askar Bumaga in Kazakhstan. (Askar Bumaga/Zenger)

A long-suffering bride had her wedding vows tested to the breaking point when her groom dropped her in a puddle of mud as they posed for pictures.

The couple – named Murat Zhurayev and Kamilla in Kazakh media – had been posing for their wedding photos when the groom scooped his bride into his arms.

But as he struck a dramatic, arty pose, groom Murat slipped and both of them ended up sprawling in a muddy slime caused by a flash rainstorm in Almaty.

The first snap shows her looking lovingly at her man with the spectacular panorama of the mountains in the background and their images reflected in a water-filled puddle.

The next image shows water droplets scattering through the air as they slip in the mud and both end up flat on their backs.

In another of the snaps in which she is on her knees in a muddy puddle with him standing behind in a suit also covered in mud it looks as if she’s about to cry.

She was then seen walking away also close to tears with a completely muddy dress soaking wet from the puddle and him struggling to follow her.

But as he slogs through the mud and she realizes how it all looks, she then starts to laugh.

Photographer Askar Bumaga’s snapshots capturing how the pair landed in the mud, turning Kamilla’s dress from pristine white to dirty brown. have since racked up more than 41,000 ‘likes’ on Instagram.

Askar told Zenger News (in English): “My main specialization is the photography of lovers and weddings. I’ve been doing this for over 10 years.

“I planned this photoshoot as an experiment. Unfortunately, or fortunately, such failures, the mistakes of others and random situations attract more attention than standard photo sessions against the background of a beautiful sunset.

“Indeed…these photos have traveled the globe. We were interviewed from various TV channels in different countries.

“The photoshoot itself took place in Almaty, Kazakhstan. No one was injured during the filming of this project.”

Murat and Kamilla have actually been married for over two years and were simply doing a photoshoot in wedding attire at the time.