Russian troops invaded Ukraine on February 24 in what the Kremlin is still calling a "special military operation".
By Lee Bullen May 24, 2022
Facebook
Twitter
Linkedin
Email 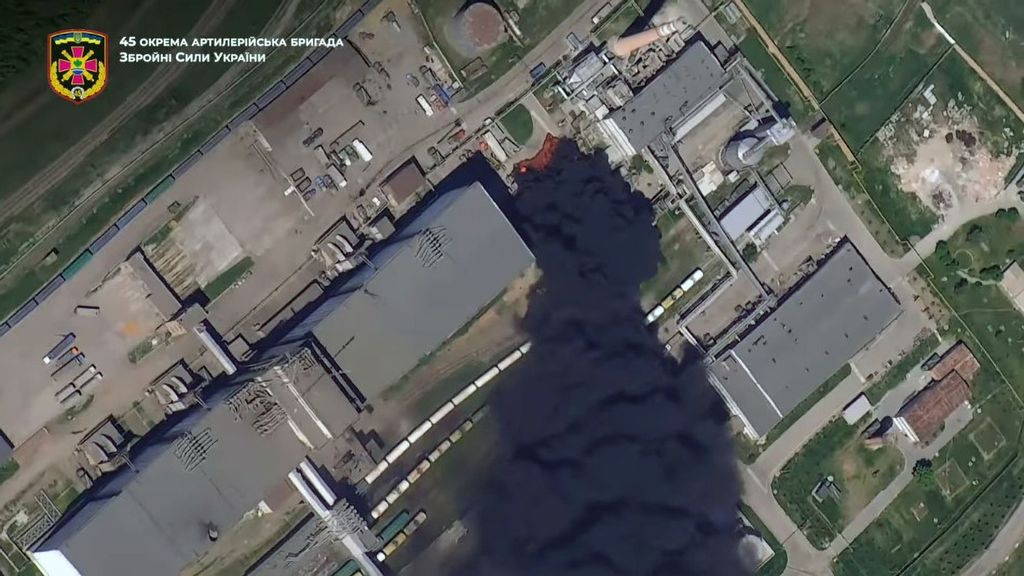 Combat test drive of the Ukrainian UAV SPECTATOR -Ukrainian artillerymen destroyed the base of the occupiers in May 2022. (@45oabr/Zenger).

This is the moment Ukrainian fighters destroy a Russian fuel tanker and several armored vehicles.

The 45th Separate Artillery Brigade of the Armed Forces of Ukraine said on May 22: “BOOM, effective combat test drive of the Ukrainian UAV SPECTATOR of the 45th OABR!

“There is always work for drones in the unit on the front line. Air reconnaissance provided the data – and there was a worthy target, a hostile object.

“The drone took off for reconnaissance work in the evening and confirmed the target. In the early morning the next day, they took off again with the support of 2S7 [Pion artillery] and it worked out well.

“The hot smell of the Ukrainian Pion, as it is called, is the last thing the occupiers felt.

“The orcs are down a tanker and several units of armored vehicles. We are in a great mood from our effective cooperation.

“And an invitation to all manufacturers of modern military equipment and the latest weapons – welcome, we have a real, real test site for your products!”

The Ukrainian Center for Strategic Communications (StratCom) said: “The 45th Separate Artillery Brigade of the Armed Forces of Ukraine carried out an attack with the precision of a surgical scalpel.

“As a result, the racists are minus one tanker and several units of light armored vehicles. To be continued…

Ukrainian President Volodymyr Zelenskyy called Russia’s invasion of Ukraine an “absolute failure” and said Russian leaders were afraid to acknowledge “that catastrophic mistakes were made at the highest military and state level”.