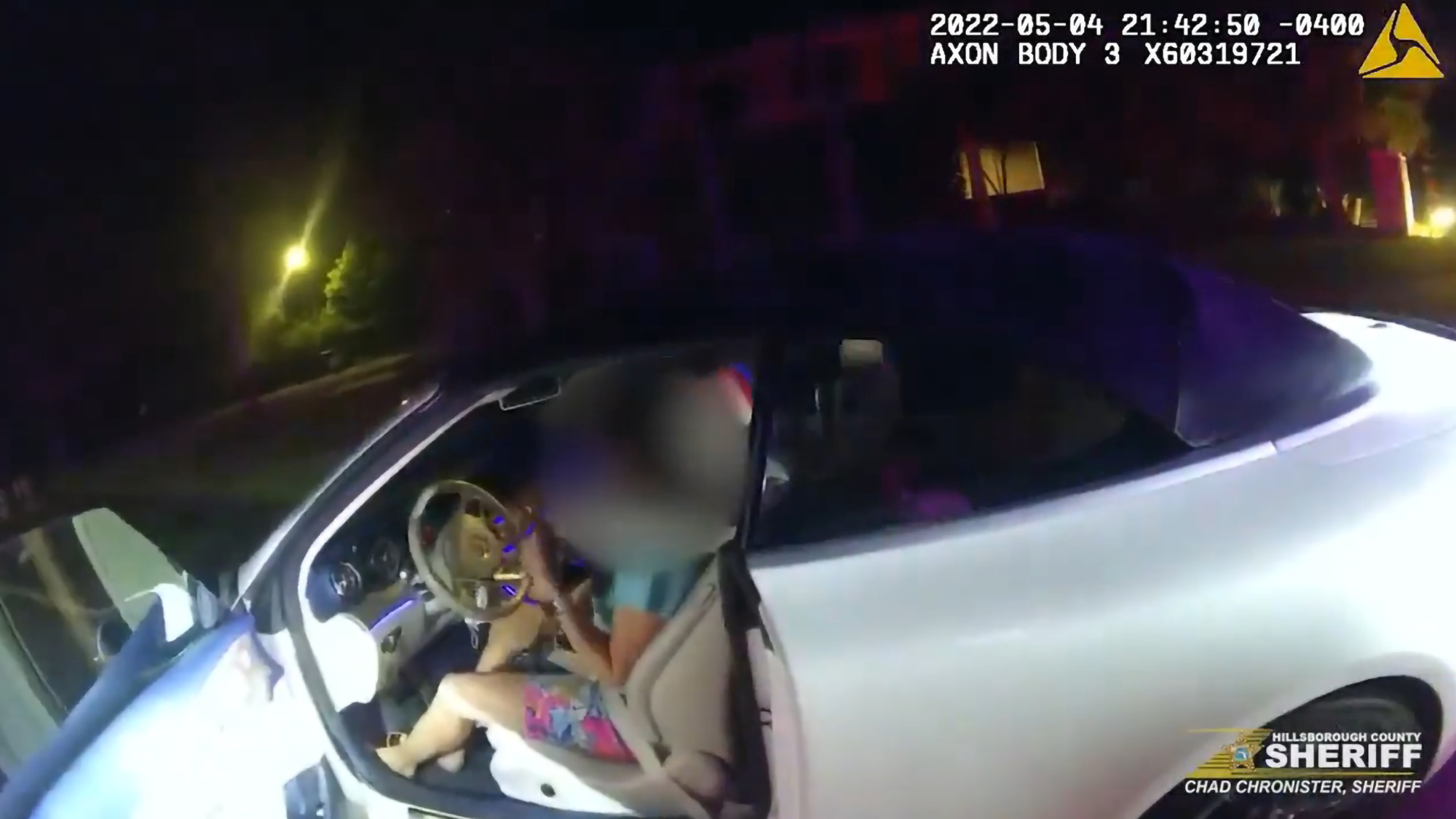 A dramatic video showed that a woman driving at night at high speed nearly struck an officer who was conducting a traffic stop along a road in Florida.

Body-cam footage taken by deputy Charles Williams shows that a white Mercedes sedan passed within inches of him, side-swiping his patrol vehicle as it was stopped in Lutz, 15 miles north of Tampa on Florida’s Gulf of Mexico shore.

On the evening of May 4, Deputy Williams called his superiors to report: “I just had a white Mercedes hit my vehicle,” before starting a high-speed chase of the car and its hit-and-run driver on Dale Mabry Highway.

Fearing for his own safety and for that of other motorists, Williams activated his siren and flashing lights; however, the driver continued to elude him.

When the car finally stopped, Williams confronted the driver, telling the woman behind the wheel to “get out.”

The video obscured the woman’s face as she descended from the Mercedes, pleading for forgiveness and saying “I’m sorry”.

Once the driver was standing in front of Deputy Williams, who said: “You realize you hit my truck, right?”

“Yeah, you hit it and kept on going,” the deputy said.

The woman claimed: “I didn’t know I hit it.”

Apparently expressing disbelief that she had not registered the glancing collision and the sound it made, Williams asked: “You didn’t hear a loud boom?”

Williams explained to her how she could have killed him: “I was standing in the road and you almost hit me.”

“I thought a hit a rock or something,” the woman claimed: “I heard a clunk.”
Then she tried to touch Williams and he told her not to touch him.

“You almost hit me and then hit my truck. And then you keep going. And I’m behind you with my lights on and you continue to go,” the exasperated Williams said

Another officer enters the frame as Williams asked the woman why she would drive in the lane after seeing the stopped police vehicle with its lights flashing.

“You didn’t think to move over? I’m literally blocking the lane,” Williams said.

“Remember, if you see emergency lights: Switch lanes if you can safely do so. Slow down to 20 mph less than the posted speed if you can’t switch lanes.”

The video ended with Sheriff Chad Chronister telling citizens: “Don’t put our deputies or any first responder at risk,” and added, “When you see flashing lights, change lanes.”

“If you can’t safely move over, then slow down or proceed with caution,” he said finally.