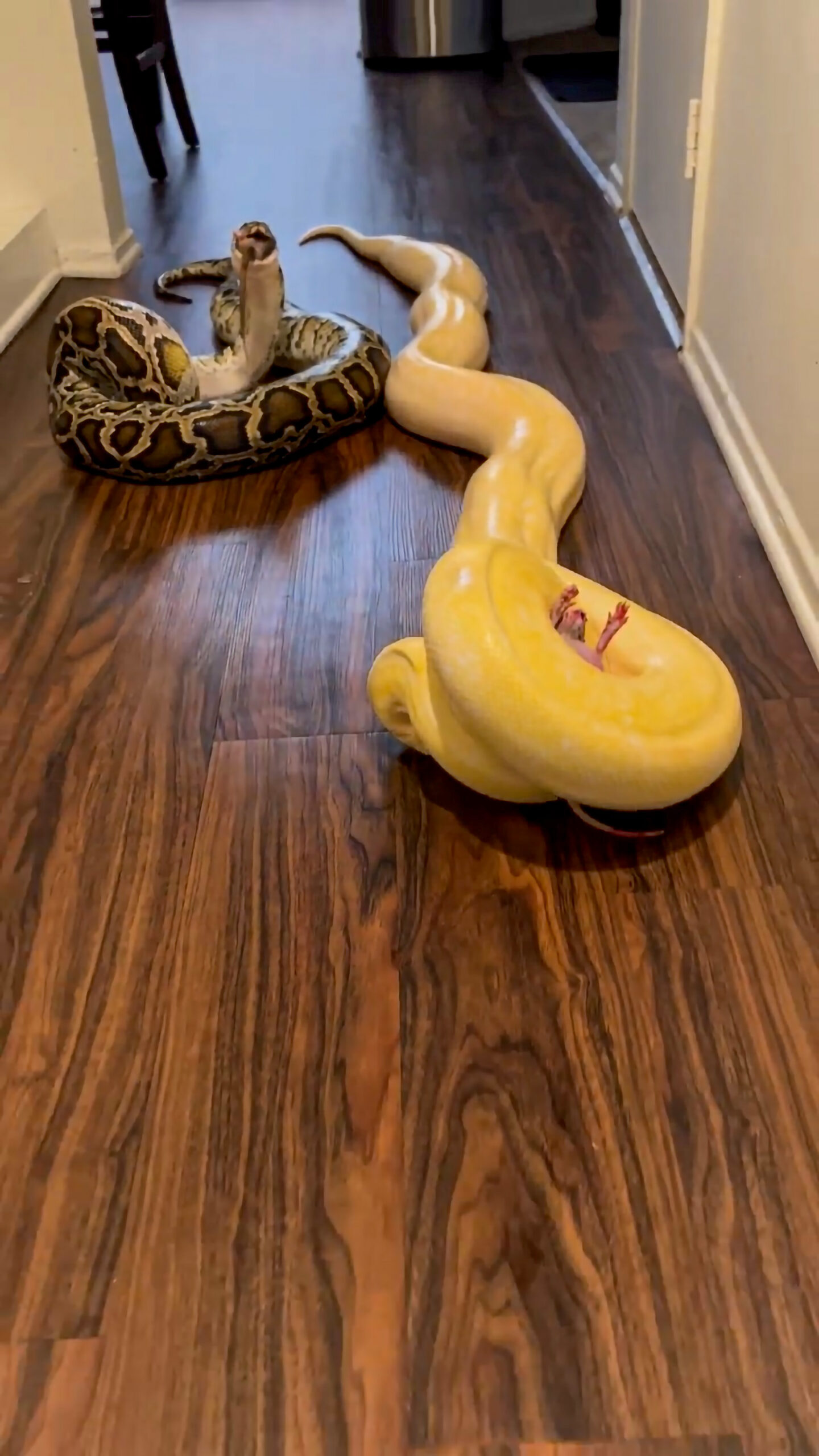 A California pet owner shot videos of his dangerous Burmese pythons as they snatched rats from his outstretched hands for a midnight snack.

Thomson said: “Both videos were recorded at my home that me and these incredible animals share!”

One of the videos shows him dangle a white rat by its tail in front of an eerily yellowish python, which then lunges and grabs the treat in its jaws before strangling it.

Behind the yellow snake is another Burmese python (Python bivitattus), which sports its natural coloration of alternating brown and cream lines and spots.

Another video shows the owner caressing the two snakes while their forked tongues lash out to sense their surroundings and seek their prey.

The 27-year-old Thomson added: “I’m also known for my jaw-dropping educational videos with all sorts of reptiles!”

The snake enthusiast has kept pet reptiles since he was just 8 years old, and while in high school, he had around 15 snakes.

So far, Thomson has been co-habiting with reptiles for 20 years.

The albino python is dubbed Banana Pudding, Thomson said, and the other is named Rocky.

“Rocky being a male is a normal phase of this species as you would commonly see in the wild,” Thomson said.

As for Banana Pudding, Thomson said that it is “a genetic mutation of Albino and Granite combined to give her the yellow and white coloration.”

While they are just four years old, they still have a lot of growing to do: python adults can reach lengths over 23 feet and weigh roughly 150-200 pounds. They average about 12 feet in length.

These giant snakes which take a lot of responsibility and have huge appetites.

Hatchling pythons should be fed one to two times each week with mice or rats, while adults are fed about every two weeks with larger prey equal in size to the width of the snake.

However, they can kill and swallow animals like deer and alligators up to five times as wide as their head because of the stretchy ligaments in their jaws.

Despite this, Thomson says his snakes are tame and have been used for many public events.

Justin said in the interview that these snakes have changed his life in a way that he will never forget so he is forever grateful.

Burmese pythons, former pets, have been introduced to the Florida Everglades and have nearly eliminated native wild mammals such as raccoons, bobcats, and foxes.

According to the U.S. Geological Survey, fatal attacks on people by pythons cannot be ruled out, especially in areas where there are ponds, lacks, canals and other bodies of water where the snakes like to hunt.