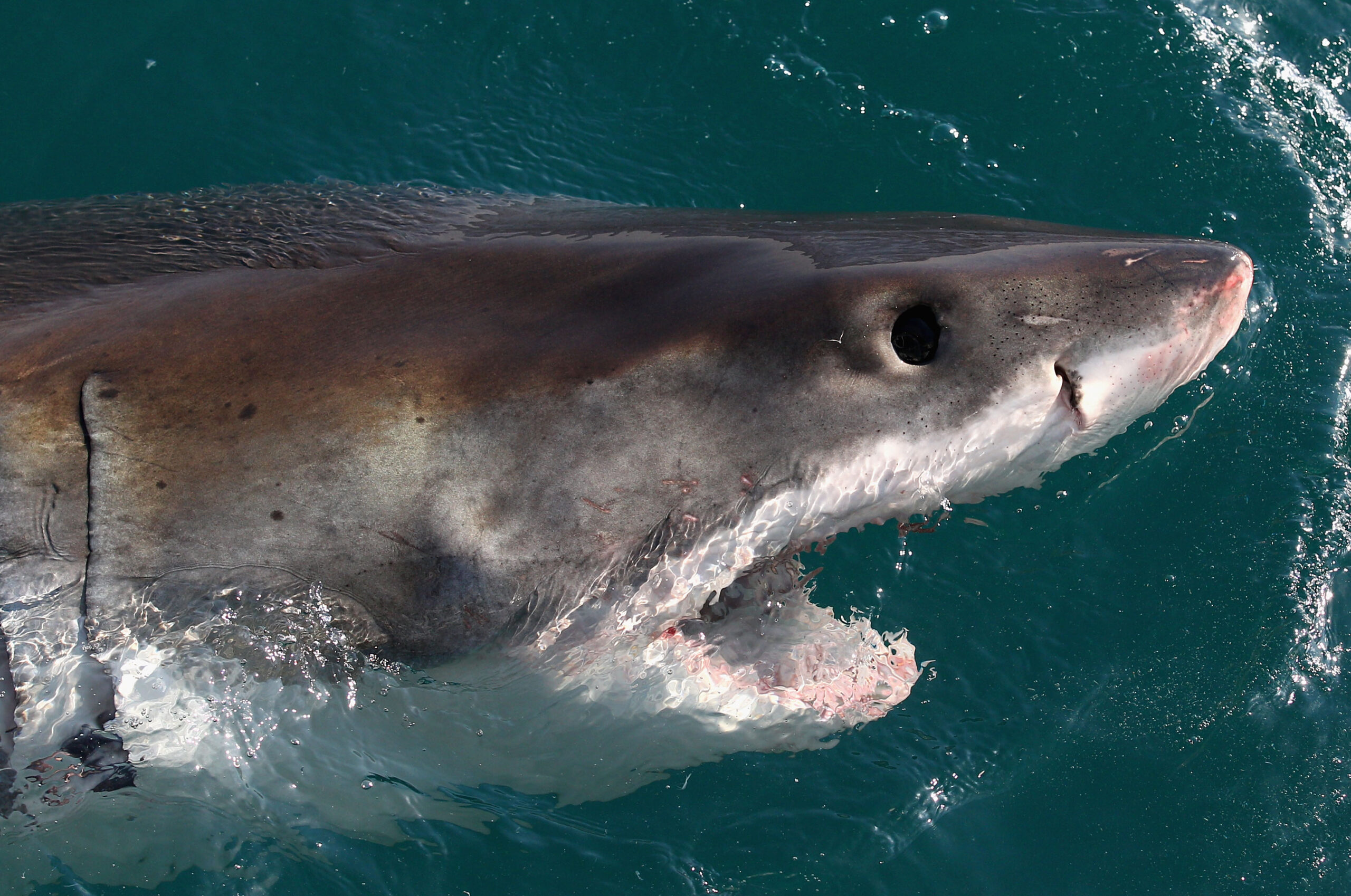 The jaws of legend and nightmare were captured in this video by an intrepid underwater cameraman who was swimming among great white sharks.

Euan Rannachan is an Emmy Award-winning photographer and videographer who recorded images of a monster great white off the shore of Guadalupe Island, located some 130 nautical miles from Mexico’s Baja California.

The video shows the shark, which is apparently at least 10 ft long being baited with tasty morsels as much smaller fish school around it in the deep blue.

Turning in the water near the surface, the shark follows the bait and then faces Rannachan.

Usually, as in this case, Rannachan was in a shark-proof cage to ward off fatal bites from the huge fish also known as Carcharodon carcharias.

As the great white approaches Rannachan, it opens its massive jaws and shows off its rows of razor-sharp pearly-white teeth before just missing the bait and turning away.

Rannachan posted the video on April 28 on his Instagram page @euanart where he features his shark-related content.

He is a co-founder of Be A Shark Adventure Travel– a provider of shipborne tours that offer fellow divers opportunities to get close and personal with great whites.

Guadalupe Island is also known as Isla Guadalupe is an arid biosphere reserve that features extinct volcanoes, and is one of the easternmost islands of the Pacific Ocean.

Goats that once stripped its vegetation have been removed, and the island is now inhabited only by Mexican military personnel operating a weather station, and a few scientists and seasonal fishermen.

The son of two artists, the British Rannachan attended the Academy of Art University in San Francisco, and then began working as a corporate photographer for The Clorox Company where he is still engaged.

In 2019, Rannachan gained renown for managing to photograph a great white shark in a pose similar to one of the images film-maker Steve Spielberg used in his iconic 1975 film ‘Jaws’.

Safe inside a cage, Rannachan was nearly close enough to touch the shark when he took the career-defining picture.

Shark attacks may be relatively rare, but they are no joke.

‘Jaws’ was inspired by infamous shark attacks during the 1916 summer heat wave along the New Jersey shore. Four people died and one was injured in several attacks that were blamed variously on great white or bull sharks.

In April, a great white was blamed for the deaths of two South African swimmers whose mauled bodies were found on a Durban beach.

And in February, British ex-pat Simon Nellist was killed by a white shark while swimming offshore at Sydney in the first such recorded attack in 70 years.

«Previous Post
VIDEO: I Could Just Squeeze Down Another Mouthful: Python’s Grim Lunch»Next Post
VIDEO: Slow Mow: One Horsepower Lawn Mower Is A Cut Above The Rest