Toddler Dies In Hot Car During Heat Wave In Memphis

Experts offer tips for avoiding such tragedies, including “look before you leave.”
By Marianne Mizera May 24, 2022
Facebook
Twitter
Linkedin
Email 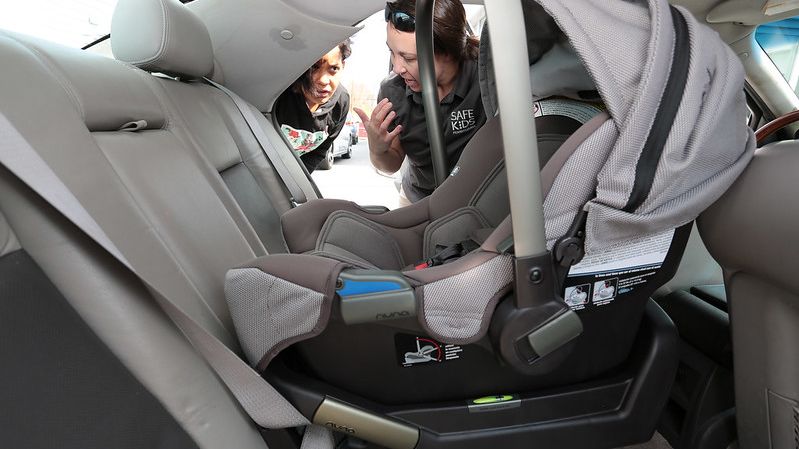 Ashley Graves, (right) coordinator of Safe Kids Pennsylvania, talks with a mom about the installation of a new infant car seat. The infrastructure bill that President Joe Biden signed into law in 2021 requires auto manufacturers to install rear-seat reminders to alert adults when a child is accidentally left inside a vehicle. (Penn State Health/Flickr)

A toddler died May 19 after he was left for six hours in a hot vehicle parked just outside a daycare center in Memphis, Tennessee.

The child’s death — the third such fatality in the U.S. this year — underscores how dangerous high temperatures in cars can be.

Memphis police said daycare workers found the 1-year-old boy shortly after 2:30 p.m. in the vehicle. He was in critical condition when he was rescued and died soon after arriving at Le Bonheur Children’s Hospital, authorities said.

Police said a preliminary investigation points to heat exhaustion as the cause of death.

Memphis police said an employee of the daycare center was detained for questioning in relation to the incident. The staff member picked up the child on their way to work and apparently forgot the child in the car, investigators told WREG-TV. No charges have been filed, and police continue to investigate.

Memphis has been experiencing near-record high temperatures for May. Last Thursday, temperatures rose to 91 degrees Fahrenhet in the city, with a RealFeel™ temperature of 94, according to AccuWeather data.

Experts said temperatures that high can easily make a vehicle feel like an oven inside — reaching a sweltering 125 degrees in mere minutes.

Research has shown that vehicles can become dangerously hot quickly — even when the outside temperature is relatively moderate or cooler, around 70 F, according to a 2005 study by the American Academy of Pediatrics. Cracking windows open does little to mitigate that rapid rise in heat in a vehicle, the study noted.

“It’s important for families to understand that it doesn’t have to be 90 degrees outside for a child to suffer from heatstroke inside a vehicle,” Amber Rollins, director of the organization Kids and Cars, previously told AccuWeather.

“We’ve seen children who have died in hot cars on days when the outside temperature was in the 50s or 60s, and that’s because a vehicle does act like a greenhouse. It allows that heat to come in through the windows, traps it inside, and it’s an oven, it heats up very quickly,” said Rollins.

A similar incident occurred earlier this month in Georgia when an 8-month-old girl was left for hours inside a hot car.

Since 1998, there have been more than 900 hot car deaths involving youngsters, according to the National Highway Traffic Safety Administration.

In 2018 and 2019, a record 53 children died of vehicular heatstroke each year. In 2020, as the coronavirus pandemic was taking hold, 26 children lost their lives in hot cars, and in 2021, a total of 23 children died, according to the administration.

More than half of the deaths involved children under the age of 2 were due to caregivers forgetting the child in the vehicle, per data from the National Safety Council and San Jose State University.

Law-enforcement officials and other experts caution parents and other caregivers to take preventative measures to avoid leaving a child — or family pet — inside a hot vehicle, especially during the summer months.

They advise the following:

• Make it a habit of opening the back door every time you park to ensure no one is left behind. To enforce this habit, place an item that you can’t start your day without in the back seat (backpack, wallet, briefcase, employee badge, laptop, phone, etc.)

• If others are in the vehicle with the driver, clearly announce and confirm who is getting each child out of the vehicle.

• Keep a stuffed animal or a diaper bag in the front seat as a visual reminder or cue that the child is with you.

“Look before you leave!” was the message the Memphis Police Department shared Friday on social media.

Some groups are pushing for technology in vehicles, such as sensors that set off an alert if someone is left inside a car. Also, the infrastructure bill that President Joe Biden signed into law in 2021 requires auto manufacturers to install rear-seat reminders that would alert parents and caregivers when a child is accidentally left inside a vehicle.

“Never leave children alone in or around cars; not even for a minute,” Kids and Cars states. Be especially careful during busy times, schedule changes and periods of crisis or holidays. This is when many tragedies occur.”

«Previous Post
As Lake Mead Dries Up, Bodies Of More Homicide Victims Are Likely To Be Found»Next Post
Asteroid 4 Times Larger Than Empire State Building To Fly Past Earth