Paddy made the 4,000 mile trip to meet Bridget in Chicago on May 17.
By Anamarija Brnjarchevska May 24, 2022
Facebook
Twitter
Linkedin
Email 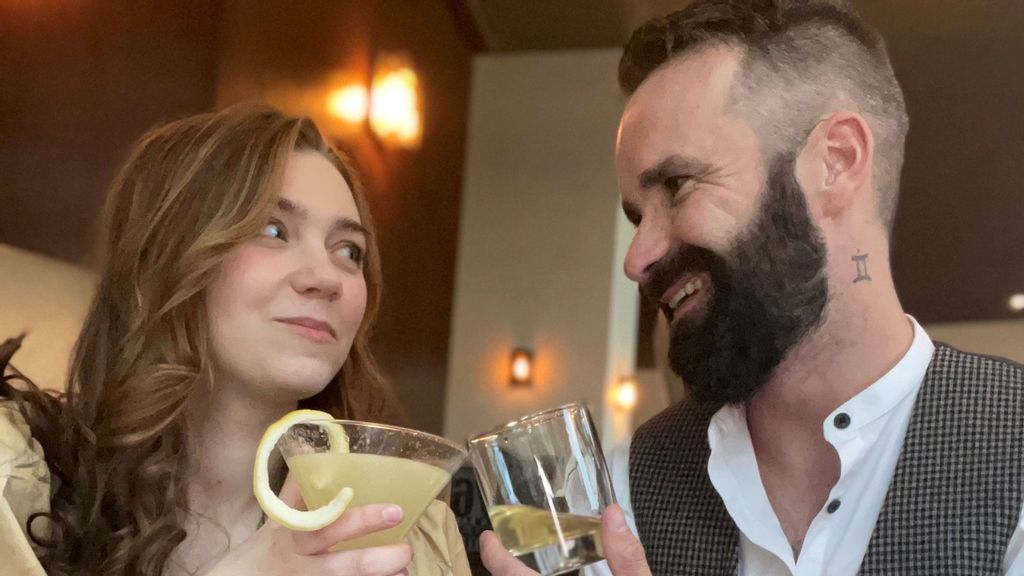 A romantic Scot flew 4,000 miles to meet an American girl he matched with on Tinder after only two months of chatting - after mistakenly believing she lived in Edinburgh. (Simon Galloway/Zenger)

A romantic Scot flew 4,000 miles to meet an American girl he matched with on Tinder after only two months of chatting – after mistakenly believing she lived in Edinburgh.

Paddy Campbell, 32, only used the app for the first time when a friend downloaded it for him when he became single in January.

On March 21 he matched with Bridget Kelly, 28, who was using Tinder Passport to search for a Scottish date after becoming bored of going out with Americans.

When Bridget asked ‘What’s the weather like over there?’ Paddy realized she wasn’t in Edinburgh, which he had assumed from the tartan dress she was wearing.

The couple began chatting nonstop despite a six-hour time difference and Bridget jokingly invited him to be her date at a friend’s wedding on May 21.

Paddy made the 4,000 mile trip to meet Bridget in Chicago on May 17 – and they spent a magic few days going out for dinner and breakfast, and walking around the city.

Bridget accidentally told him she loved him a few days before he got on the plane but Paddy chose not to say anything until he had met her in person, and they are now telling each other all the time.

But they have both kept the app so they can nostalgically look through their messages, which they plan to screengrab and print out.

Bridget is planning to come to Scotland for two weeks in July, while Paddy, from Alloa, Clackmannshire, will go over to America again in September.

The couple said that when it works, it works, despite the massive constraints.

Paddy said: “A friend got if for me back in January, I’d no idea about Tinder but I wanted to move on.

“I got a message from Bridget and thought she was in Edinburgh, she had a tartan dress on.

“She said ‘How’s the weather over there?’ and I looked properly and realized she was 4,000 miles away.

“We had a lot in common and carried on chatting on Snapchat.

“Bridget said she had a wedding to go to and I offered my services.”

Wedding dress salesman Bridget was specifically hoping to meet a hot Scottish guy of Irish heritage – and matched with a Celtic fan.

The couple snapped selfies together in Chicago with Paddy wearing his Hoops top.

Paddy believes Scottish men are best for dating because they are direct and funny – although he said Bridget needed to be a “translator” when they went out in Wisconsin, where she lives.

He said: “We’ve got the best patter in the world, we say it how it is, no beating about the bush. We always speak our minds.

“Bridget has been my translator.”

He often gets up at 3 a.m. to chat with Bridget before starting work at 6 a.m., and Bridget sometimes starts work at 2 p.m. which makes the time difference easier to manage.

Paddy will fly home on May 31 and they have a packed itinerary including watching the play of To Kill a Mockingbird in Chicago.

On Friday evening, May 20, Bridget introduced her parents to her new beau.

Bridget said: “They make them different in Scotland, I was just intrigued about the idea.

“I’m of Irish heritage and I was curious about what it would be like to live in Ireland or Scotland.

She added: “We were on the phone and I was saying something I really like about him and I accidentally said ‘I love you’.

“We have definitely said we loved each other.”

Despite their connection, both of them realized it may not click when they met in person and were open to being “best friends” if that was the case.

Paddy said: “We were respectful of that but we got lucky.”