‘When the going gets tough, the beast comes out of me,” says the victorious super-middleweight boxer. 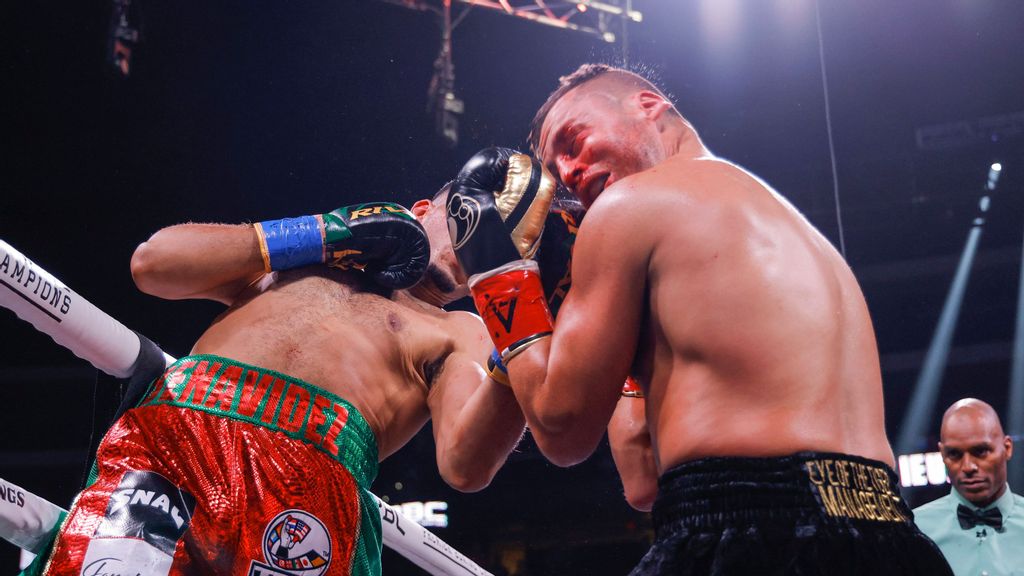 The reason was evident in Benavidez’s vicious blood-letting of former champion David Lemieux Saturday night at the Gila River Arena in Glendale, Ariz. Benavidez (26-0, 23 KOs) relentlessly battered Lemieux (43-5, 36 KOs) before a boisterous partisan crowd near his hometown of Phoenix.

The victory earned him the WBC’s vacant interim title and cemented his status as “The Boogeyman” of the 168-pound division. The bout was mercifully halted by referee Harvey Dock at the 1:31 mark of the round at the request of Marc Ramsay, Lemieux’s trainer.

“Mike Tyson gave me that name, ‘The Mexican Monster,’ so what do you think I’m gonna do?” said Benavidez, 25, whose sixth straight knockout made him a division titleholder for the third time. “I just feel that I’m the strongest 168-pounder, and nobody can mess with me.”

The exit was the fastest in the career of Lemieux, who was also stopped in the seventh and eighth rounds by Marco Antonio Rubio (April 2011) and Gennady Golovkin (October 2015).

With 13 seconds left in the first round, Benavidez’s left hook rocked Lemieux backward into a corner of the ring. There, Benavidez fired and landed 26 unanswered blows to Lemieux’s head and body before the round ended.

“David Benavidez is a helluva fighter. Much respect. He’s got good hands, good movement. Congratulations…,” Lemieux said. “We’ll talk to my team [about whether or not to retire], but definitely tonight was not my night.”

Lemieux was literally saved by the bell ending the first round, according to Showtime interviewer Jim Gray.

“The referee, Harvey Dock, told me he was going to stop the fight right at the end of the first round when the bell rang,” Gray said. “Because the bell rang, he decided to let Lemieux go back to the corner and continue.” Lemieux was walked by Dock after the first round to his corner, where Ramsay told him, “You’ve gotta do something, or else I’m gonna stop the fight.”

A three-punch combination — a left uppercut, straight right and a piston-jab — 18 seconds into the second dropped Lemieux beneath a bottom rope.  Lemieux used the ropes to pull himself back into the ring, rising at the count of four before Dock told him, “You’re on a short leash. Show me something.”

The Canadian fought on, forcing Benavidez backward despite bleeding from a cut over his right eye with a minute remaining in the second round.

“[Lemieux] is a special type of breed. He’s a great fighter and a tough champion,” said Benavidez, admiring Lemieux’s resilience. “There are some fighters out there who when they’re about to get stopped, their whole body shuts down.”

But Ramsay had seen enough following Benavidez’s third-round head-swiveling left hook, overhand right, left uppercut combination all to the head of Lemieux as Dock separated the fighters, signaling the end.

“Once I get guys as tough as David Lemieux, that pushes me to work even harder to better myself and my style,” Benavidez said. “There’s always room for improvement. I’ll only get better from here. Every day I strive to be as great as I can be at everything — defense, offense. I’m gonna keep working. I keep maturing.”

Reflecting on his in-the-ring success, Benavidez said that when he first started he “thought one world title was impossible, and now, I’ve got three.”

“The sky’s the limit right now,” he added. “It’s been a crazy ride. I’ve had a lot of ups and downs in my career. But we’ve always maintained that hard work and done the best that we can, and now it’s paid off with me being a three-time world champion,” Benavidez said.

“It’s surreal. It’s a dream, man, that everybody came out to see me. I’ll give it all of my heart to you guys every night. When the going gets tough, the beast comes out of me. I know I’m the best super middleweight in the world already, but this is just the tip of the iceberg.”

“We have three options for November—- Plant, Morell and Charlo,” Lewkowicz said. “Don’t fantasize. Canelo will not take a fight against the real champion of the people. He looked so bad [against Bivol.]”

“I’m right here waiting for them. I’m not scared of anybody. I’m waiting for them to sign the contract, so my hat’s off to David Lemieux because he’s the only one who had the balls to take the fight with me. Those guys talk big like everybody’s scared of them, but I’m right here trying to get into fights with them. But if I don’t get the fights, I’m interim title holder now,” said Benavidez, who believes Alvarez is ducking him and that Charlo fears him.

“If they really believe in their skills then put their 0’s on the line. I’m willing to do it. But what really motivates me is that I can bring 10,000 people into the stadium. I give the fans the action, the fights and the excitement they want to see. I think Caleb Plant and Jermall Charlo are fights that can happen by the end of this year. I was the No. 1 contender and the one who was supposed to fight Canelo, so I definitely feel like I deserve that fight.”