Russian troops first stormed the Azovstal iron and steelworks plant in the city of Mariupol on April 19 and destroyed large areas.
By Lee Bullen May 23, 2022
Facebook
Twitter
Linkedin
Email 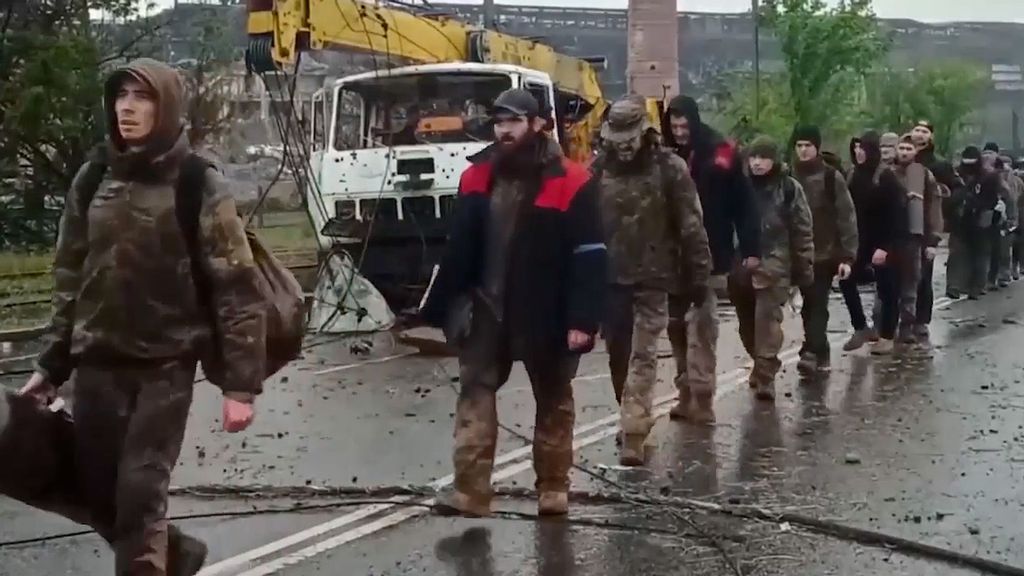 The departure of militants from Azov, in Mariupol, Ukraine, on May 18. (Ministry of Defense of Russia/Zenger).

Ukrainian ‘Azov’ soldiers have spoken about the conditions they are experiencing in a Russian detention camp after surrendering at the besieged Azovstal plant earlier this week.

Russian troops first stormed the Azovstal iron and steelworks plant in the city of Mariupol on April 19 and destroyed large areas.

The Azov Battalion, a unit of the National Guard of Ukraine based in Mariupol, remained at the plant to mount a resistance.

However, after weeks of being besieged by the Russian forces, the unit began to suffer from severe shortages and did not even have basic necessities such as bandages to treat their many wounded.

As a result, around 1,000 Ukrainian fighters have surrendered at the Azovstal plant this week.

The Russian Ministry of Defense (MoD) said in a statement on May 18: “In Mariupol, militants of Azov nationalist unit and Ukrainian servicemen holed up in the Azovstal plant continue to surrender.

“Over the past 24 hours, 694 militants have laid down their arms and surrendered, including 29 wounded.

“A total of 959 militants have surrendered since May 16, including 80 wounded, 51 needed urgent hospital treatment and were admitted to Novoazovsk Hospital in the Donetsk People’s Republic.”

Ukrainian fighter Pryashchenko Stanislav gave an account of the treatment he has been receiving at the hands of his Russian captors.

In the footage, he is heard saying: “Today they took us to the dining room. We had soup in the morning. There was also soup and porridge at lunch.

“We have not had dinner yet, we are still waiting. So we have beds, mattresses. Everything is as it should be. Blankets, pillows, everything is there, bed linen.

“Here are the beds, we have mattresses, blankets. We have enough beds for everyone.”

Stanislav added: “We have wounded guys here. We are waiting for the doctor now, they promised to come right now, to change the dressing.”

Junior sergeant Slivak Sergey Evgenievich, 30 57 National Guard, said: “Treatment is better than I expect, I have a blanket, mattress. Food is adequate, there is enough to eat. As for everything else, conditions here are good.”

Surgeon Yuri Zayduk, lieutenant of the Medical Service, said: “I really didn’t know what to expect. In general what I wanted, what turned out was better than I expected.

“Everything is fine, I have no complaints, everyone is respectful, adequate. Nobody uses insults here, nobody offends us, for sure.

“They helped my colleagues, I was assured that everything was fine. Most of the seriously wounded soldiers were taken out, at least during that first time with me.

“It was fine, they did the dressings. I hope such treatment will continue there.”

Following the fall of Mariupol, the Russian authorities plan to tear down the Azovstal metallurgical plant and turn the city into a “resort”, according to the Institute for the Study of War.