VIDEO: I Love Chew: Tender Moment As Gazelle And Calf Share A Meal 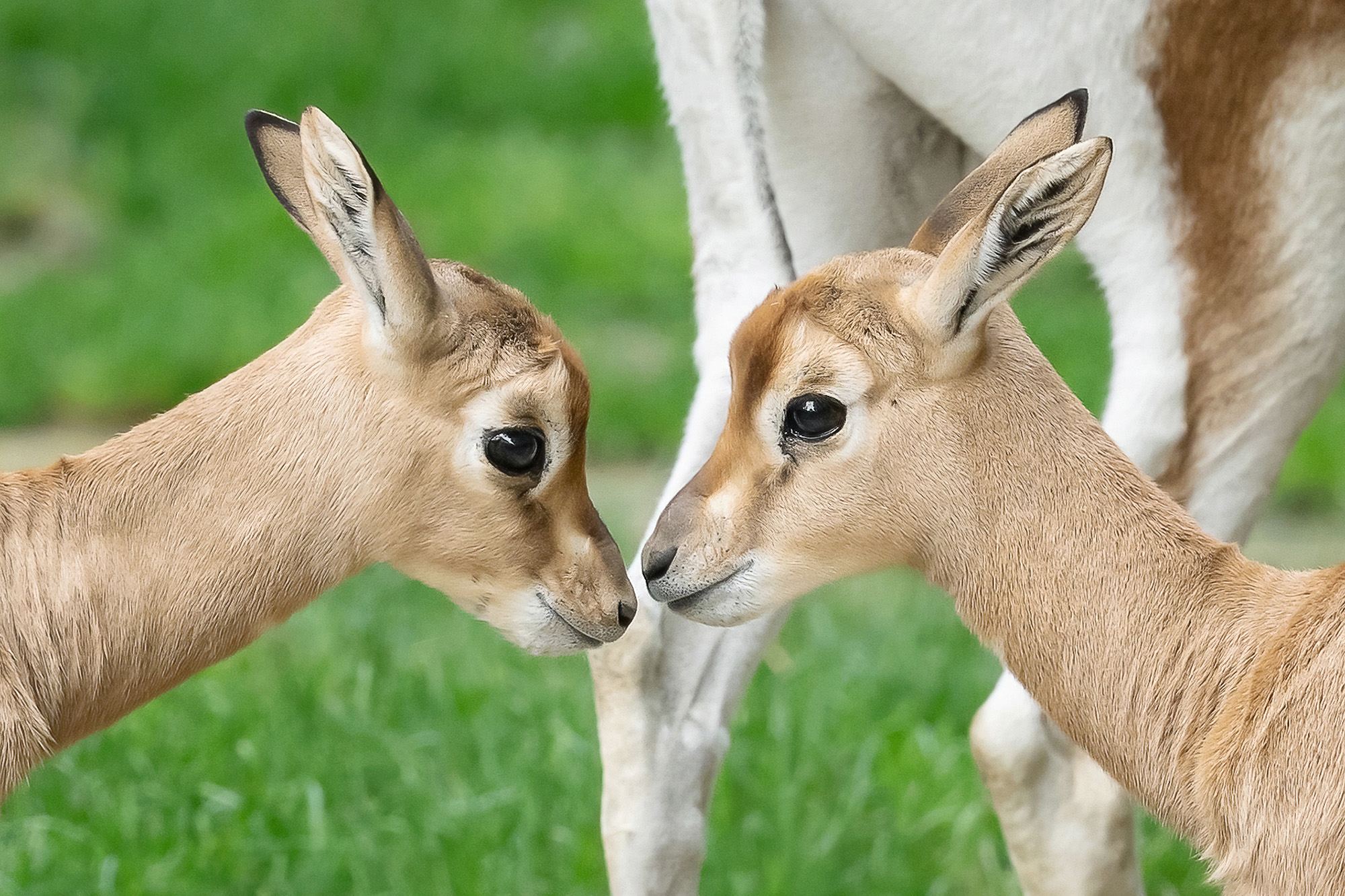 The two adorable dama gazelle offspring that were born in the Tiergarten Schonbrunn Zoo in Austria's capital Vienna in April. (Daniel Zupanc/Zenger)

These two newborn gazelle siblings of a critically endangered species are enjoying the soothing springtime sunshine at a zoo in Austria.

But their mom is careful to always keep an eye on them as the dynamic duo hop around, much to the delight of the zoo’s visitors.

At one point the mother shares a meal of their favorite branches with one of her youngsters.

Zoologic curator Folko Balfanz said: “They are lying in the grass most of the time, just enjoying the sun. However, slowly but steadily there are examining every inch of their enclosure. They are really curious.”

Balfanz added: “We expect the significant ringed horns to grow before their first birthday.”

Zoo Vienna spokeswoman Corinna Buergmann told Zenger News: “The siblings are a boy and a girl.

“Apart from our frisky duo, no further dama gazelles have been born recently at Schoenbrunn Zoo.”

Zoo director Stephan Hering-Hagenbeck said: “The species has been successfully bred at Schoenbrunn Zoo and a few other zoos as part of the European Endangered Species Program.

“It has even been possible to reintroduce them in protected areas of their former habitats. This is another encouraging aspect of our cooperation.”

Apart from Vienna Zoo, the dama gazelle (Nanger dama) is present in captive breeding programs in other European institutions as well as in North America, North Africa and the Middle East.

The gazelle – also known as the addra gazelle or mhorr gazelle – lives in the African Sahara desert and the Sahel.

A critically endangered species, it has disappeared from most of its former range due to overhunting and habitat loss.

With a wild population of less than 500, the dama gazelle is listed as critically endangered by the International Union for Conservation of Nature’s (IUCN).

The IUCN is an international organization working in the field of nature conservation and sustainable use of natural resources headquartered in the Swiss town of Gland.

Little action is taken to protect the species in most of the poor countries where populations remain such as Mali, Niger and Chad. While the national parks are poorly guarded, poaching is still a dominating issue.

Another reason for the decline of the dama gazelle is habitat destruction. Humans cut down the branches of the trees on which this gazelle feeds. As a result, the trees die and the gazelle cannot eat.

The dama gazelle – which has a lifespan of up to 12 years in the wild or 18 years in captivity – is white with a reddish-brown head and neck.

It is between 35 and 37 inches tall at the shoulder and weighs between 77 and 165 lbs. The head is small with a narrow muzzle, and the eyes are relatively large.

A few days following birth, the animals are strong enough to follow the herd. After a week, they are able to run as fast as the adults.

Tiergarten Schoenbrunn was established by the royal Austrian-Hungarian Habsburg Family in the magnificent park of Schoenbrunn Palace in Vienna’s Hietzing district, back in 1752.

Today the institution – which contains around 8,000 animals from 700 species on an area of 17 hectares – is the world’s oldest zoo still in operation. It has registered more than two million visitors every year since 2006.