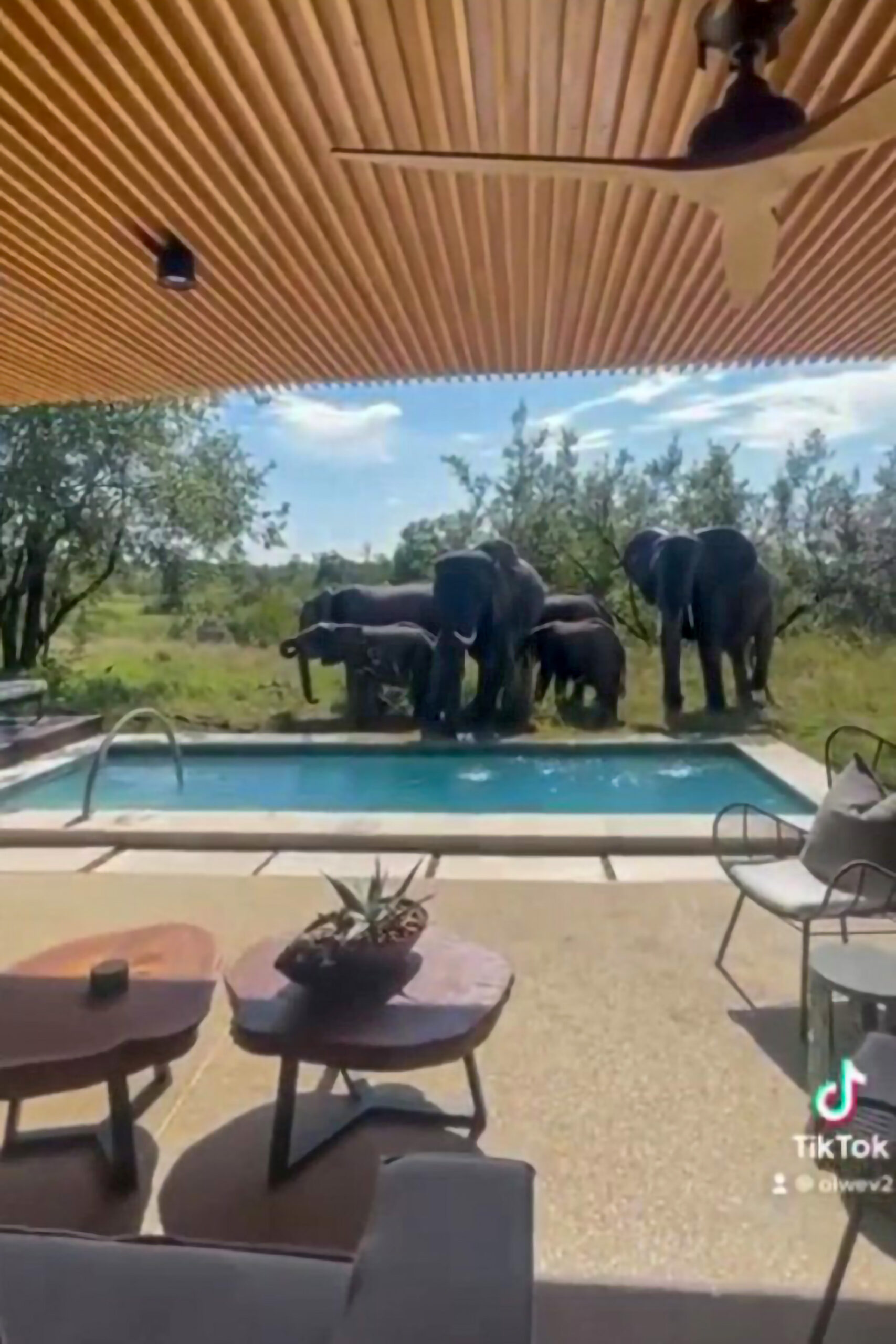 Getting up for a morning coffee is not always a memorable experience, but in South Africa your morning routine might come with a side of sporting elephants.

A video recorded by a guest at the Sabi Sabi Earth Lodge in Mpumalanga province in the country’s northeast shows him opening the door of his room leading to a patio where he sees six African elephants by the glittering pool.

Three are adult pachyderms, while the others are youngsters who stay close to their hulking parents.

The elephants don’t appear disturbed by the guest’s presence as he settles in to relax, putting his feet up on a patio table.

The video was shot by Instagram user @pubityearth, who has been known for posting interesting travel content on his social media.

The luxury Sabi Sabi Earth lodge takes guests on safaris at its own private game reserve that borders the famed Kruger National Park, where thousands of tourists have seen the abundant wildlife.

The Sabi Sabi Earth Lodge is one of four locations for guests at the private game reserve, which has been in operation for some 40 years.

The Selati Camp, Bush Lodge, Little Bush Camp, and Earth Lodge are billed as luxury retreats where each offers a distinct experience to travelers who come to see the so-called Big Five (elephant, rhino, lion, leopard, and Buffalo) in addition to cheetahs, wild dogs, baboons, and the many other species of the African veldt.

Visitors can also visit the Bokoni stone-walled site where pre-colonial Africans established an agrarian society between 1500 to 1820.

In addition, the rock paintings and engravings, as well as other archaeological evidence show the extent of the human history of Mpumalanga, including, for example, Africa’s oldest ironworks dating to around 500 AD.

During colonial days and under apartheid, Mpumalanga was part of then-Transvaal Province, which changed to its current name in 1994.

According to the Sabi Sabi website, Earth Lodge is built into a slope of the earth, which it bills as the “most environmentally sensitive lodge in Africa.”

It has 13 suites, each featuring individually designed furniture, a private pool, and indoor and outdoor showers.

The lodge offers opportunities to observe wildlife at a nearby waterhole, as well as vistas of the veldt.

It also provides sybaritic experiences such as massage and beauty treatments, in addition to a 6000-bottle wine cellar and gourmet meals.

Each morning during their stay, guests can join game rangers and trackers to go on foot or wheels to get close to the continent’s signature wildlife.