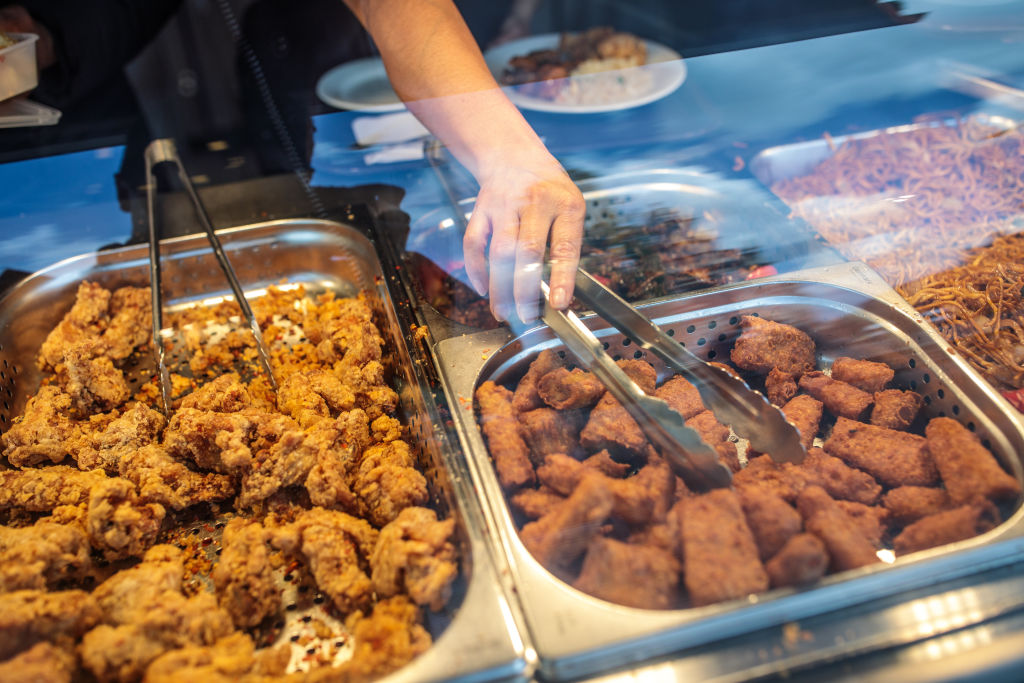 A woman serves herself deep-fried food at an all-you-can eat restaurant in Camberwell on April 26, 2018 in London, England. (Photo by Jack Taylor/Getty Images)

Junk food and sweets as well as red meat can help you to an early grave according to a new study on nutrition.

Their recently published study adds to a growing body of knowledge about how ultra-processed foods and red meat impact human health and longevity.

Compared to past literature analyzing ultra-processed and animal-based foods’ health impacts, this study included one of the largest cohorts, with over 77,000 participants.

It also considered a diverse array of diets, including vegetarian and non-vegetarian.

As a result, outcomes provided new insights about ultra-processed foods as a common denominator of mortality across vegetarians and non-vegetarians, says Gary Fraser, MBChB, PhD, a study author, and professor at Loma Linda University School of Medicine and School of Public Health.

“Our study addresses the question of what can make a vegetarian diet healthy or unhealthy,” Fraser says. “It seems that the proportion of ultra-processed foods in someone’s diet is actually more important with respect to mortality than the proportion of animal-derived foods they eat, the exception being red meat.”

The second was the proportion of the diet from animal-based foods (meats, eggs, and dairy) as opposed to plant-based foods.

Participants completed a frequency food questionnaire including over 200 food items to describe their diets. They also provided other health-related and demographic information about themselves, including sex, race, geographic region, education, marital status, rate of tobacco and alcohol use, exercise, sleep, BMI, and comorbid conditions with cardiovascular disease or diabetes.

Researchers then analyzed participants’ health and demographic information in conjunction with their mortality data, provided by the National Death Index, for a mean timeframe of about seven and a half years. Next, researchers used a statistical model to help them consider each variable independently of others and produce a cause-specific mortality analysis.

Study authors report that high consumption levels of ultra-processed foods were associated with mortality related to respiratory, neurologic, and renal conditions — particularly Alzheimer’s disease, Parkinson’s disease, and chronic obstructive pulmonary disease (even when restricted to people who never smoked). However, high ultra-processed food consumption was not associated with mortality from cardiovascular disease, cancer, or endocrine conditions.

Results did not reveal an association between mortality and dietary intake of total animal-based foods. Once researchers parsed animal-based foods into sub-categories, however, they found a statistically significant 8% increase in the mortality risk associated with moderate (approximately 1 &half; oz per day) consumption of red meat compared to no red meat.

The study calls for further research into the specific health effects of ultra-processed food consumption in humans. While research endeavors continue to deepen understanding of how ultra-processed foods impact our health, Fraser advises avoiding consuming them at high levels.

“If you’re interested in living longer or to your maximal potential, you’d be wise to avoid a diet filled with ultra-processed foods and replace them with less processed or unprocessed foods,” Fraser says. “At the same time, avoid eating a lot of red meat. It’s as simple as that.”