A corpse stuffed in a barrel was discovered on the exposed floor of the manmade lake. The drought may bring more grisly finds.
By Zachary Rosenthal May 23, 2022
Facebook
Twitter
Linkedin
Email 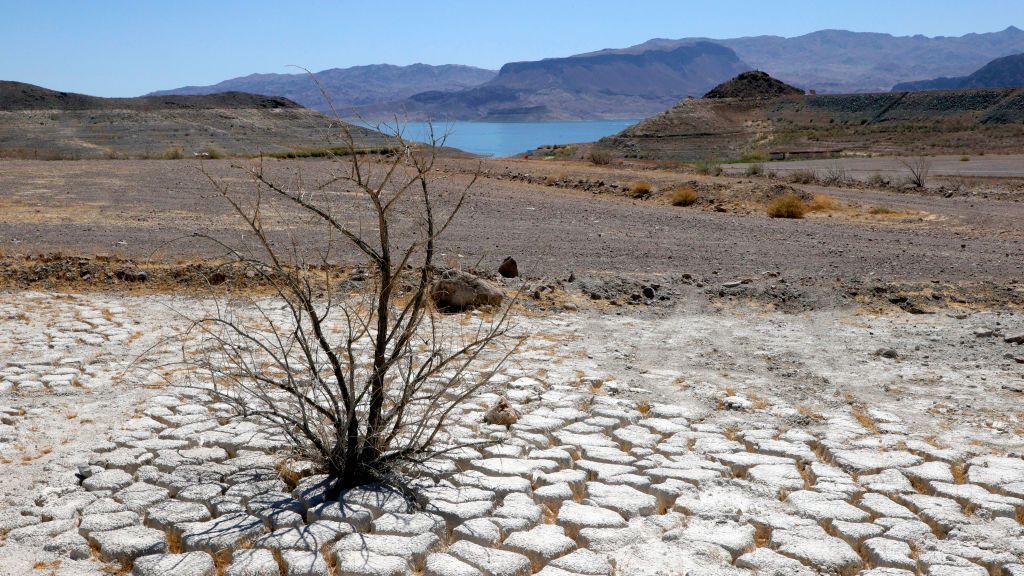 Lake Mead is seen in the distance behind a dead creosote bush in an area of dry, cracked earth that used to be underwater near the Lake Mead Marina in June 2021. (Ethan Miller/Getty Images)

Long-buried secrets are coming to light.

With Lake Mead at its lowest level since it was first filled in the 1930s, all sorts of things have been found in the water — including murder victims.

On May 1, boaters spending a day at the lake stumbled upon a barrel and saw it had human remains in it, according to CNN. Las Vegas Metropolitan Police Homicide Lieutenant Ray Spencer dated the victim to the 1980s, noting that items found inside the barrel suggest the time when the body was dumped.

“It’s really odd in the sense that had the lake never receded, we would never have discovered the body,” Spencer told The New York Times.

Photos of the barrel obtained by KLAS-TV show the rusty-looking container half embedded in the mud on what is now the side of the lake. In the 1980s, the spot where the barrel was located would have been dozens of feet underwater.

“We heard a woman scream from the side of the beach and then my husband went over to see what was wrong,” Shawna Hollister, who was at Lake Mead at the time the body was discovered, told KLAS-TV. “And then he realized there was a body there in a barrel.”

Spencer said it is likely more long-lost bodies will be discovered as Lake Mead plunges to even lower levels.

“I would say there is a very good chance as the water level drops that we are going to find additional human remains,” Spencer told KLAS-TV on Monday.

Lake Mead has fallen to just over 1,054 feet above sea level, which is about 160 feet below being full and well below the highest recorded level of over 1,225 feet in July 1983, according to The Associated Press. Never in the lake’s history has the water level been lower.

Rocks and bodies aren’t the only things the low water level is exposing.

Last week, one of Lake Mead’s intake valves appeared above the water line for the first time, according to the Southern Nevada Water Authority, which manages the water supply for the Las Vegas area. That valve had been operational since 1971, but now that it is above the waterline, it can no longer siphon water.

The Southern Nevada Water Authority has constructed a new pumping station that will ensure water can be collected as long as Lake Mead doesn’t fall to less than 875 feet above sea level.

Lake Mead, along with much of the American West, is in the midst of what some experts are calling a mega-drought. Unusual discoveries have been taking place in bodies of water throughout the region since 2021, when water levels began to decline substantially.

In California’s Folsom Lake, about 500 miles to the north and west of Lake Mead, a small airplane that officials believe crashed in 1986 was found in June 2021. In Utah’s Lake Powell, about 250 miles east of Lake Mead, a family on a fishing trip discovered a shipwrecked boat that had been exposed by the receding waters in April 2021.

The western United States and parts of northern Mexico are experiencing their driest period in at least 1,200 years, according to a recent peer-reviewed study published in Nature Climate Change.

Some drought is attributable to human causes, with the study authors finding that roughly 19 percent of the “exceptional drought severity” in 2021 could be attributed to human-caused climate trends.