In The Future, You’ll Commute To Work On A Skateboard, Says Hunter Boards CEO

Hunter Boards is capitalizing on the micro mobility boom by envisioning the electric skateboard as a vehicle, not a toy.
By Virginia Van Zandt May 21, 2022
Facebook
Twitter
Linkedin
Email 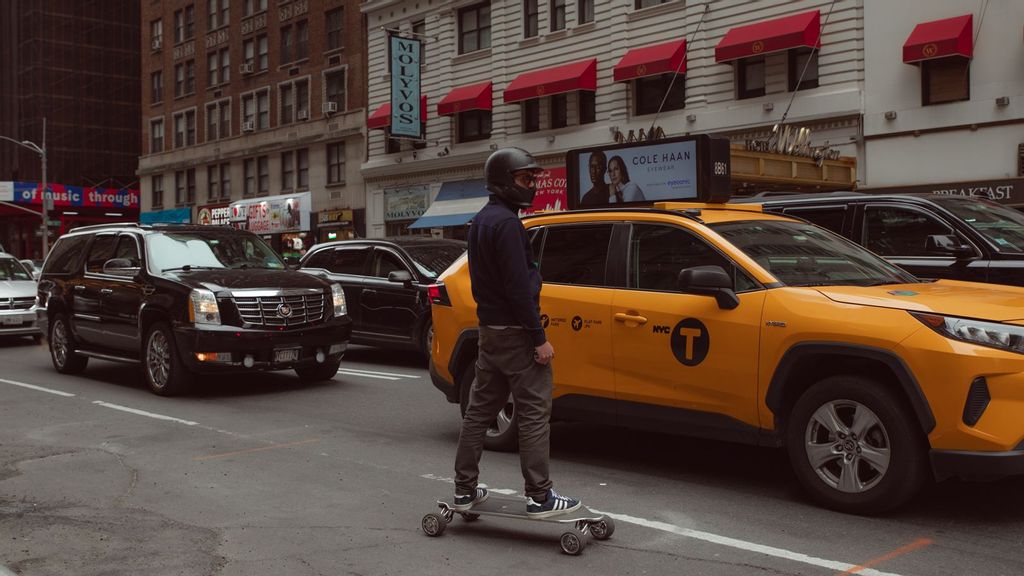 A skateboarder rides a Hunter board in New York City. (Courtesy of Hunter Boards)

Pedro Andrade moved to Los Angeles with a dream. But Andrade isn’t looking to book a TV show or land a movie deal – he wants to build the Tesla of skateboards.

Los Angeles is the red-hot center of the global skateboarding market. Andrade’s already facing tough competition, but seems to be attracting customers in the most competitive market at a rapid pace.

The Portuguese-born CEO of Hunter Boards, a Lisbon-based electric skateboarding company, believes he is on the verge of something massive (hence the unbridled confidence only a 25-year-old CEO can have.)

Andrade and his team at Hunter Boards envision a future where suit-clad men commute to their corporate jobs on electric skateboards and busy moms skate to the grocery store with the push of a button on a remote control. Some might think it’s crazy to bank on skateboards becoming real vehicles. And yet, it used to seem crazy to hop into a stranger’s car for a ride – now that’s just calling an Uber.

Andrade’s dream may not be far off. The “micro mobility” industry, which encompasses small vehicles such as scooters, bikes, and mopeds, is fast-growing in urban areas. The global micro mobility market was valued at $44 billion in 2020 and is expected to reach $214 billion by 2030, according to a report from Allied Market Research. Americans took 136 million trips on bikes, e-bikes, and scooters in 2019 – a 60% jump from 2018, according to a report by the National Association of City Transportation Officials.

Hunter Boards is one of the first to capitalize on the micro mobility boom by envisioning the electric skateboard as a vehicle rather than a gadget. Andrade’s small, Portugal-based team created a battery-powered board with a matching remote control. Production is limited: the boards are made-to-order and customizable based on the customer’s weight.

For a product that is stereotypically ridden by the young, reckless, and broke, the Hunter skateboard’s retail price of $2,099 seems luxurious. But Hunter Boards wants to give the juvenile skating industry a classy upgrade, cementing the company as the “Tesla of skateboards by combining ultra-portability, comfort, style, and electric power,” said Andrade, who just started shipping the latest batch of boards.

It’s easy to see why skateboards are gaining popularity in cities. Bicycles, the classic method of foot-powered transportation, can be tiresome to ride and carry around when not in use. Electric-powered scooters are bulky and difficult to park. The Hunter board combines the best of both worlds as a remote controlled, electric vehicle with speeds up to 34 miles per hour and a 24-mile rechargeable battery life.

“Your micro mobility vehicle will get you from point A to point B. But what happens when you reach point B? You can’t carry a bike upstairs or into a restaurant,” Andrade said. The Hunter board weighs 18 pounds and its unique suspension system doesn’t discriminate against age or skill level. “Even my grandma rode it,” said Andrade.

“The future of micro-mobility in cities goes way beyond scooters and bikes, and these guys are proving that,” said Pedro Maia, the former head of marketing at Bolt, the premier rideshare service in Portugal. “After trying the Hunter Board, I was instantly hooked. It was the closest I had ever come to riding a flying carpet. Comfortable, fast, and easy to carry around.”

How did Hunter Boards create a “flying carpet-like” experience? The answer lies in the hands of the company’s chief product officer, Miguel Morgado. Morgado was studying engineering in Portugal when he came up with the Hunter board prototype while working on an electric motorcycle.

It took Morgado many, many rounds of testing for the board to reach the market. Seemingly small factors made a big difference. “The skateboard went from 16 to 36 kilometers in one battery, just because of the wheel compound. That was really a surprise for me,” said Morgado. And if the rider runs out of power, the board’s removable battery is sleek enough to carry a back-up.

Morgado built a skateboard that left the problems of a skateboard behind: the flexible aluminum deck keeps the rider just as stable on a rocky mountain trail than on a city sidewalk, and the agile turning system allows for a 360 degree turn on a one-lane street.

Unlike a typical skateboard, Morgado wants the Hunter board to be used for serious transportation as well as recreation. “We really wanted to put safety features in so that the skateboard is looked at more like a vehicle and not like a toy,” Morgado said. That’s our main purpose –  for you to be able to do your daily commute and feel safe with a skateboard, because it’s much lighter than a scooter.”

The Hunter Boards team is more than ready for their electric skateboard to shake up the industry – but never the rider.