The zoo said an expert team managed to correct the “abnormalities that threatened the calf’s survival”.
By Lee Bullen May 20, 2022
Facebook
Twitter
Linkedin
Email 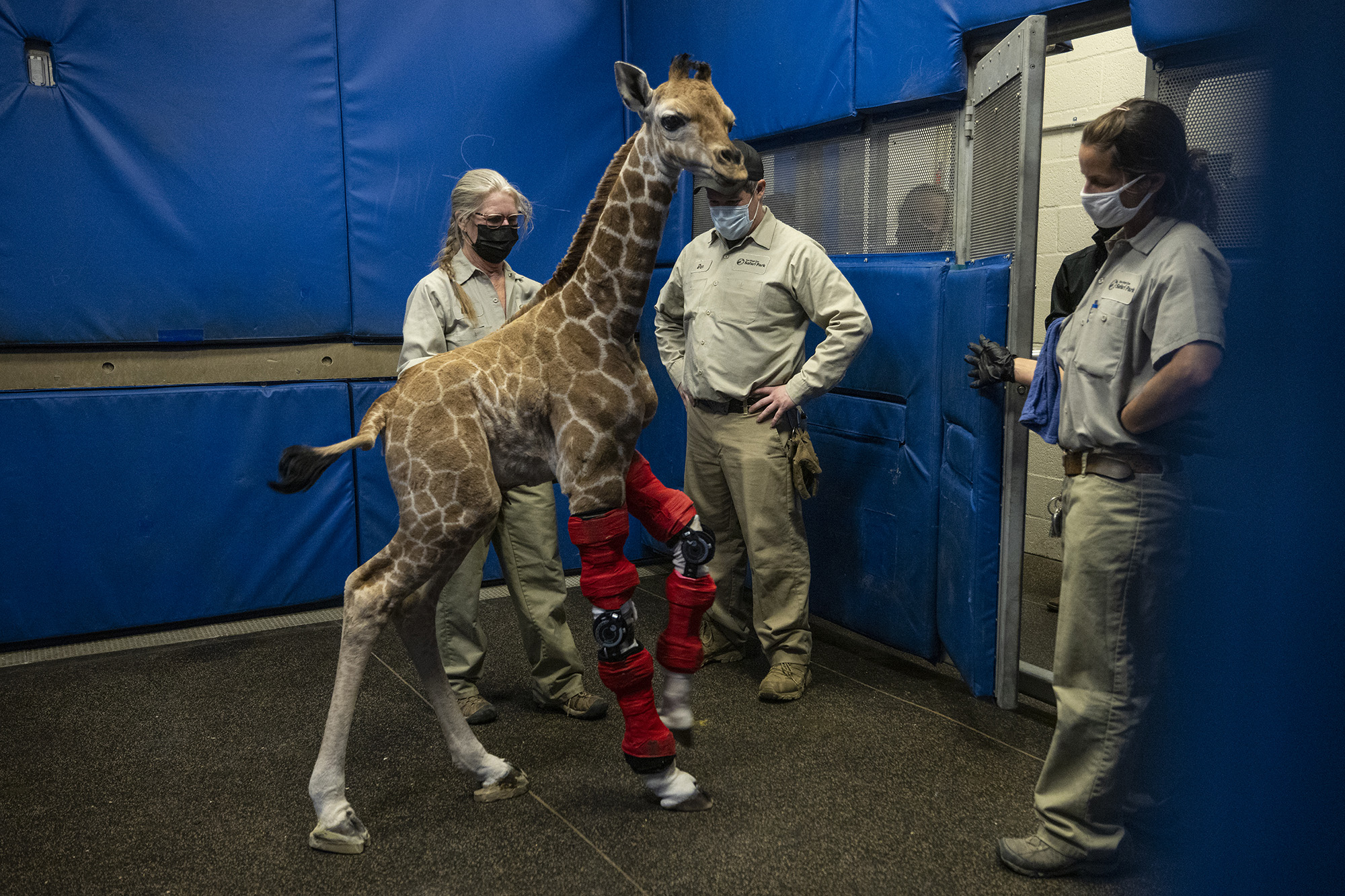 This cute giraffe calf has been given a new lease of life after having her crooked legs corrected with innovative brace treatment.

Msituni, just three months old, was born at San Diego Zoo Safari Park in California with a disorder that made her front legs bend improperly and prevented her from standing or walking.

The zoo said an expert team managed to correct the “abnormalities that threatened the calf’s survival”.

In a statement obtained by Zenger News, San Diego Zoo Safari Park said on May 12: “The female youngster – named Msituni (pronounced see tune neee), which means “in the forest” in Swahili – received a pair of specialized giraffe-patterned orthotic braces that attached to her front legs to help correct a hyperextension of the carpi, bones that are equivalent to those in the human wrist.

“This disorder had caused the giraffe’s front legs to bend improperly, and made it difficult for her to stand and walk. Wildlife care staff said Msituni’s chances of survival would have been very low without the treatment provided by the San Diego Zoo Wildlife Alliance team in collaboration with orthotists from Hanger Clinic.”

Senior veterinarian Matt Kinney said: “We are so glad to have the resources and expertise to step in and provide this young calf the opportunity for a full life.

“Without these lifesaving braces to provide support, the position of her legs would have become increasingly more painful and progressed to a point she would not have been able to overcome.”

The zoo said: “The custom orthotic braces were crafted by Hanger Clinic, a nationwide provider of outcomes-based orthotic and prosthetic (O&P) care. While the company focuses on O&P care for humans, members of the San Diego-based Hanger Clinic team consulted with wildlife care staff to develop a customized plan that was specific to Msituni and her case.

“Following initial device fittings, the team quickly fabricated the custom-molded carbon graphite orthotic braces by using cast moldings of the calf’s legs and fit Msituni with her new devices, complete with a giraffe pattern to provide a natural look.

Hanger Clinic orthotist Ara Mirzaian said: “I feel a tremendous sense of accomplishment. I’ve never worked with wildlife before – it’s one of those things that is a once-in-a-lifetime opportunity, and you just have to savor the moment.”

San Diego Zoo Safari Park stated: “Apart from the irregularities in her front legs, Msituni suffered a variety of serious ailments following her birth. Wildlife health staff treated her using intravenous antibiotics for abnormalities in her blood and provided specialized hoof extenders to fix the irregular position of her back legs.

“Ultimately, the treatments were a success: Msituni is no longer receiving antibiotics, the braces have been removed, and her legs are now correctly positioned – which is leading to her attaining a healthy weight and height.

“The calf has done so well, the wildlife care team introduced her to the rest of the giraffe herd in the Safari Park’s 60-acre East Africa savanna habitat, including another adult female, named Yamikani (pronounced ya me caanee), and her female calf, Nuru (pronounced nu roo). Nuru was born 4 days after Msituni.”

Zoo director of wildlife care Kristi Burtis said: “This was an important step in Msituni’s natural development. As her bond grows with the herd, she will be able to learn behaviors and skills important to the development of a young giraffe.”