Head Cases: Horned Animals Damage Their Brains By Head-Butting Each Other Say Scientists

Research proves that ramming animals do suffer brain injuries. That may help in rehabilitating humans with similar conditions.
By Darko Manevski May 20, 2022
Facebook
Twitter
Linkedin
Email 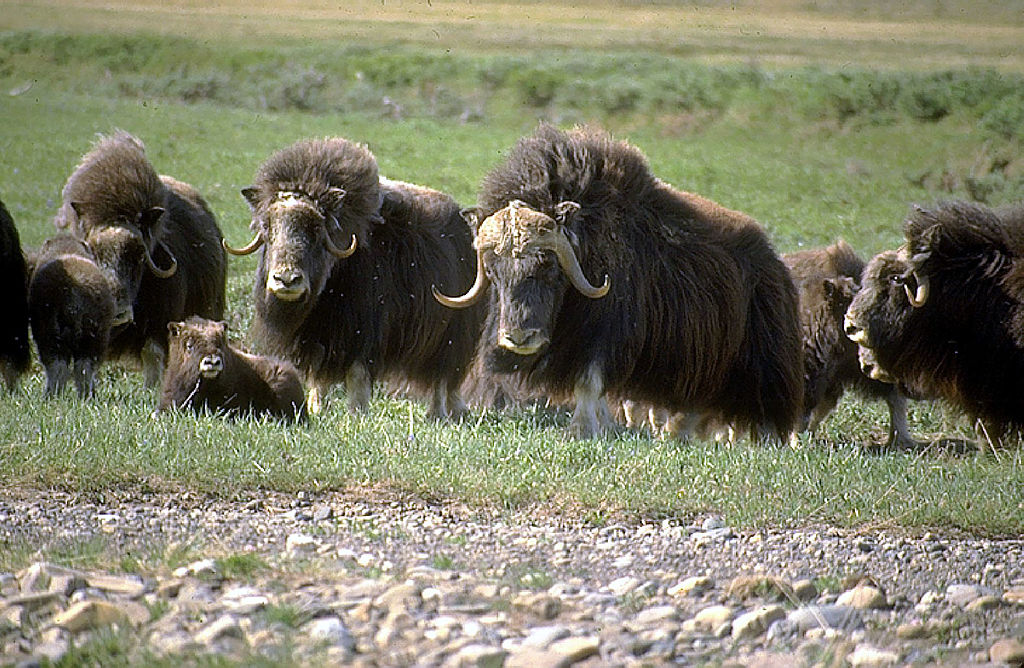 This undated photo shows muskoxen in the Arctic National Wildlife Refuge in Alaska. (Photo by US Fish and Wildlife Service/Getty Images)

Scientists have found that horned animals like muskox or bighorn sheep that head-butt each other do not escape unharmed and can end up with concussion and other serious head traumas.

The results published in the journal Acta Neuropathologica may contradict the commonly-held belief that ramming animals do not suffer brain injuries and support the notion that studies on animals with brains evolutionarily similar to those of humans may help researchers understand and reduce traumatic brain injuries.

Dr. Ackermans and her colleagues studied the brains of three deceased muskoxen from Greenland and four bighorn sheep, which were obtained from parks in Colorado and Utah and the Buffalo Zoo in New York.

Part of the reason for obtaining brains from these horned animals is that they are known to engage in violent head-to-head collisions, usually in mating and social hierarchy rituals. For instance, male muskoxen often reach speeds of up to 30 miles an hour before impact. Although a few studies have observed symptoms of traumatic brain injury (TBI), such as acting dazed, none have directly tested whether the brains of muskoxen and other ramming animals show any damage.

The other reason is that bovids—such as cows, sheep, buffalo, gazelles, and the animals in the study—have gyrencephalic, or folded, brains, which are also seen in humans.

“Our lab tries to use evolution to help solve medical mysteries,” said Patrick R. Hof, MD, Professor of Neuroscience at Icahn Mount Sinai and senior author of the study. “One of the difficulties of TBI research is that most of it is performed on smooth, rodent brains. We thought that studying the brains of ramming bovids might provide a better model for understanding TBI in humans.”

When they first arrived, the animals’ brains looked healthy, and brain scans showed that the overall structure of each animal’s brain was intact.

To look for signs of TBI damage, the researchers then cut the brains into thin slices and treated the slices with antibodies made to detect phosphorylated tau proteins found in humans or mice. This form of tau is a hallmark of damage that is often seen in the brains of Alzheimer’s disease patients, or in people who have suffered TBIs, including chronic traumatic encephalopathy (CTE).

When they looked at the brains under a microscope, they saw that one of the antibodies stained muskoxen brains at easily detectable levels, whereas the bighorn sheep brains had lightly detectable levels of staining by a different antibody.

“At first we were surprised. One of the challenges with these kinds of studies is that we don’t know whether antibodies used on human and rodents will work on bovid brains,” Dr. Ackermans said. “The fact that we detected these antibodies was important. It suggested that the brains of these animals, especially the muskoxen, sustain TBI-like damage.”

Further analysis supported the idea. For example, the prefrontal cortex of the muskoxen brains had high levels of tau protein tangles, especially near the surface of the cortex.

“This pattern is sometimes seen in the brains of people who suffer from CTE,” Dr. Ackermans said. “Our results open the possibility that these animal’s brains undergo chronic, repetitive damage, as seen in some TBI patients.”

In contrast, when the researchers looked at brain slices from an Alzheimer’s disease patient, they saw a more even and widespread staining pattern.

Curiously, an old female muskox had much more—about 20 times more—staining than the older male and five times more staining than another female. This is the opposite of what the researchers hypothesized, as males are known to ram each other harder and more often than females.

“This study left us with many interesting questions, like: Why did the female muskox brains appear to have more damage than the male ones? Is this because of differences in skull anatomy? Why did the brains of bighorn sheep have so little damage? And is it possible to harness the knowledge we gain from these animals to develop better treatments for TBI?” said Dr. Ackermans.