NASA has uncovered the mystery of Ceres, a dwarf planet between the orbits of Mars and Jupiter.
By Simona Kitanovska May 20, 2022
Facebook
Twitter
Linkedin
Email 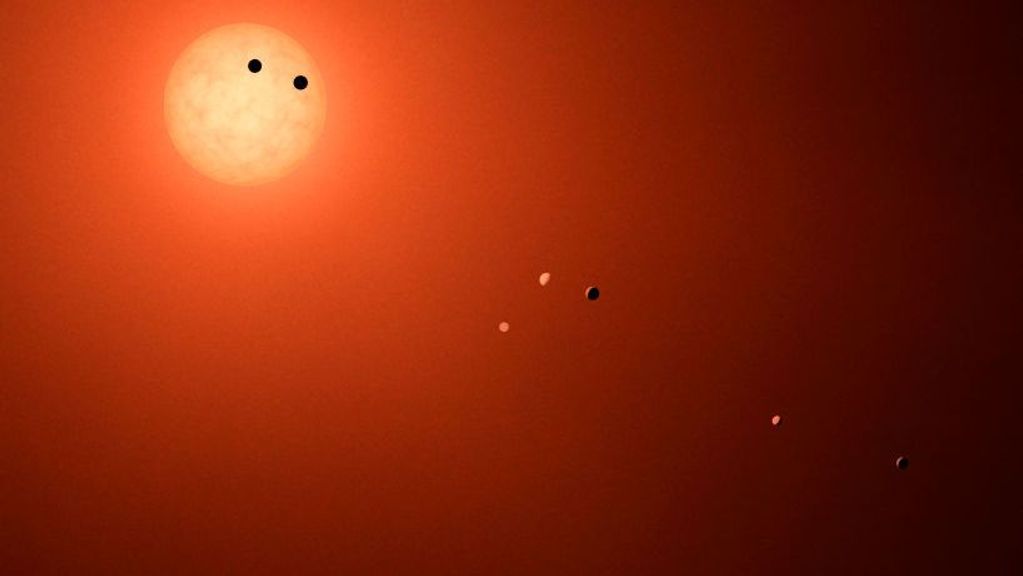 In this NASA digital illustration handout released on February 22, 2017, seven TRAPPIST-1 planets are shown as they might look as viewed from Earth using a fictional, incredibly powerful telescope. (Photo digital Illustration by NASA/NASA via Getty Images)

A dwarf planet that exists between the orbits of Mars and Jupiter was probably created in the frozen deep space before it became part of the asteroid belt.

Ceres was almost a complete mystery until the robotic NASA spacecraft Dawn approached it for its orbital mission in 2015, and since then scientists have been gathering more and more data about Ceres, including the fact that it was formed in the colder region beyond Jupiter’s orbit, before being thrust into the Asteroid Belt.

Most bodies in the Asteroid Belt do not have ammonia, so the hypothesis is that Ceres was formed outside it, in the colder region beyond Jupiter’s orbit, and then thrust into the middle of the Asteroid Belt by the huge gravitational instability caused by the formation of gas giants Jupiter and Saturn.

Its orbit around the Sun is almost perfectly circular, with 0.09 eccentricity, and an inclination of 9.73° to the invariable plane of the Solar System, much greater than Earth’s, which is 1.57°.

Ceres has too little mass to retain an atmosphere by gravitational attraction, but sunlight evaporates the ammonia and water ice below its surface, forming a mist that disperses into outer space. Ice deposits shine brightly at the bottom of its craters. The possibility of primitive life forms has not been ruled out. The craters were mapped by NASA’s 2007-18 Dawn Mission, which orbited Vesta, the second-largest body in the Asteroid Belt, as well as Ceres.

The dwarf planet’s core is probably made up of heavy matter – iron and silicates – but what differentiates it from nearby objects is its mantle of ammonia and water ice.

In an article published in the journal Icarus, researchers at São Paulo State University (UNESP) and collaborators report the findings of a study reconstituting the formation of the dwarf planet Ceres.

The research was conducted by Rafael Ribeiro de Sousa, a professor in the program of graduate studies in physics on the Guaratinguetá campus. The co-authors of the article are Ernesto Vieira Neto, who was Ribeiro de Sousa’s PhD thesis advisor, and researchers affiliated with Côte d’Azur University in France, Rice University in the United States, and the National Observatory in Rio de Janeiro.

“The presence of ammonia ice is strong observational evidence that Ceres may have been formed in the coldest region of the Solar System beyond the Frost Line, in temperatures low enough to cause condensation and fusion of water and such volatile substances as carbon monoxide [CO], carbon dioxide [CO2] and ammonia [NH3],” Ribeiro de Sousa said.

The Frost Line is now located very near Jupiter’s orbit, but when the Solar System was being formed 4.5 billion years ago, the position of this zone varied according to the evolution of the protoplanetary gas disk and the formation of the giant planets. “The intense gravitational disturbance produced by the growth of these planets may have changed the density, pressure and temperature of the protoplanetary disk, displacing the Frost Line. This disturbance in the protoplanetary gas disk may have led the expanding planets to migrate to orbits closer to the Sun as they acquired gas and solids,” Vieira Neto said.

“In our article, we propose a scenario to explain why Ceres is so different from neighboring asteroids. In this scenario, Ceres began forming in an orbit well beyond Saturn where ammonia was abundant. During the giant planet growth stage, it was pulled into the asteroid Belt as a migrant from the outer Solar System, and survived for 4.5 billion years until now,” Ribeiro de Sousa said.

To test the hypothesis, Ribeiro de Sousa and collaborators ran a large number of computer simulations of giant planet formation inside the protoplanetary gas disk that surrounded the Sun. In their model, the disk contained Jupiter, Saturn, embryonic planets (precursors of Uranus and Neptune), and a collection of objects similar to Ceres in size and chemical composition. The assumption was that Ceres was a planetesimal, one of a class of bodies thought to have been building blocks of planets, asteroids and comets.

“Our simulations showed that the giant planet formation stage was highly turbulent, with huge collisions between the precursors of Uranus and Neptune, ejection of planets out of the Solar System, and even invasion of the inner region by planets with masses greater than three times Earth’s mass. In addition, the strong gravitational disturbance scattered objects similar to Ceres everywhere. Some may well have reached the region of the Asteroid Belt and acquired stable orbits capable of surviving other events,” Ribeiro de Sousa said.

Three main mechanisms acted to keep these objects in the region, he added: the action of gas, which smoothed their orbital eccentricities and inclinations; mean motion resonances with Jupiter, protecting them against ejections and collisions caused by that giant planet; and close encounters with invader planets, scattering planetesimals to more stable inner regions of the Asteroid Belt.

“Our main finding was that in the past there were at least 3,600 Ceres-like objects beyond Saturn’s orbit. With this number of objects, our model showed that one of them could have been transported and captured in the Asteroid Belt, in an orbit very similar to Ceres’s current orbit,” he said.

Other research groups had already estimated this number of Ceres-like objects, based on observation of craters and on the sizes of other populations of celestial bodies beyond Saturn, such as those of the Kuiper Belt, where Pluto and other small planets orbit. “Our scenario enabled us to confirm the number and explain Ceres’s orbital and chemical properties. The study reaffirms the accuracy of the most recent models of the formation of the Solar System,” he said.

A Solar System planetary formation scenario based on the latest information available helps understand the study by situating Ceres in the overall process.

“From observational evidence, we know that any planetary system, not just our own Solar System, is formed from a disk of gas and dust that surrounds a newborn star. Events that form stars are still poorly understood, but the consensus so far is that stars are born from the gravitational collapse of a giant molecular cloud,” Ribeiro de Sousa said.

The existence of protoplanetary disks is not mere supposition. On the contrary, there have been robust observations, such as images obtained by the European Space Agency (ESA) using the 66-antenna Atacama Large Millimeter/submillimeter Array (ALMA) in Chile, with impressively high resolution and a wealth of details showing protoplanetary disks around very young stars.

“In the case of the Solar System, the data we have suggests the protoplanetary disk was 99% gas and 1% dust. The dust probably came from older stars that had ended their lifecycle and ejected heavy matter into space,” Ribeiro de Sousa explained. “The dust that accumulated around the Sun was sufficient to form at least the smaller bodies, the terrestrial planets, and the cores of the gas giants. The first solids to condense in the protoplanetary disk were calcium-aluminum inclusions (CAIs), which have been found in meteorites and dated as far back as 4.568 billion years ago.”

Several young stars have been observed in environments characterized as planetary nurseries, and have been dated to between 1 million and 10 million years ago. This is important information because it shows that the formation of gas planets, like Jupiter or Saturn, or planets with a gas envelope, like Uranus and Neptune, should occur within the first 10 million years of a star’s life at most. After that, protoplanetary disks no longer have enough gas.

Rocky planets of the terrestrial type could emerge earlier or later. No one knows, but other available information shows that the formation of Earth and the Moon was one of the latest events in the genesis of the Solar System, and occurred 4.543 billion years ago. The smaller bodies in the system (dwarf planets, satellites, comets, asteroids, dust, etc.) are the remains of planet formation, and evolved physically and dynamically before and after the gas stage via processes such as interaction with gas, collision, and gravitational capture.

The planetary formation process is complex, comprising stages that go from dust with a particle size as tiny as a micron (10−6 m) to planets several times larger than Jupiter. “Dust accumulates through adhesions and collisions inside the protoplanetary disk. Gravitational attraction between particles isn’t relevant, but the Sun’s gravitational pull makes gas rotate more slowly than dust, and this produces very strong aerodynamic drag on the dust, which sweeps the particles into the plane of the gas disk and drives them radially toward the Sun. When the dust reaches a size of a few centimeters, it forms pebbles, which make all the difference in the process of planetary growth because they influence the speed at which the gas rotates. When the velocities of the gas and pebbles become the same, the gas drag practically disappears, giving the pebbles a chance to accrete sufficiently to give rise to planetesimals – bodies with sizes ranging from 10 km to 1,000 km. These are the building blocks of planets and precursors of small bodies,” Ribeiro de Sousa said.

In the next stage, larger and larger objects are formed by gravitational capture of pebbles and dust, or by collisions. When an object grows large enough to have the mass of three to ten Earths, the gravitational disturbance it produces in the gas disk makes it migrate to an orbit closer to the star. When it grows larger than ten Earths, it starts accreting a gas envelope, and the build-up of gas makes its growth very fast.

“Formation of the giant planets Jupiter and Saturn produced such a huge gravitational disturbance that it modeled the gas disk and triggered a new type of planetary migration. This violent stage made planets collide and ejected planets from the Solar System until gravitational balance enabled the system as a whole to acquire a degree of stability,” Ribeiro de Sousa concluded.