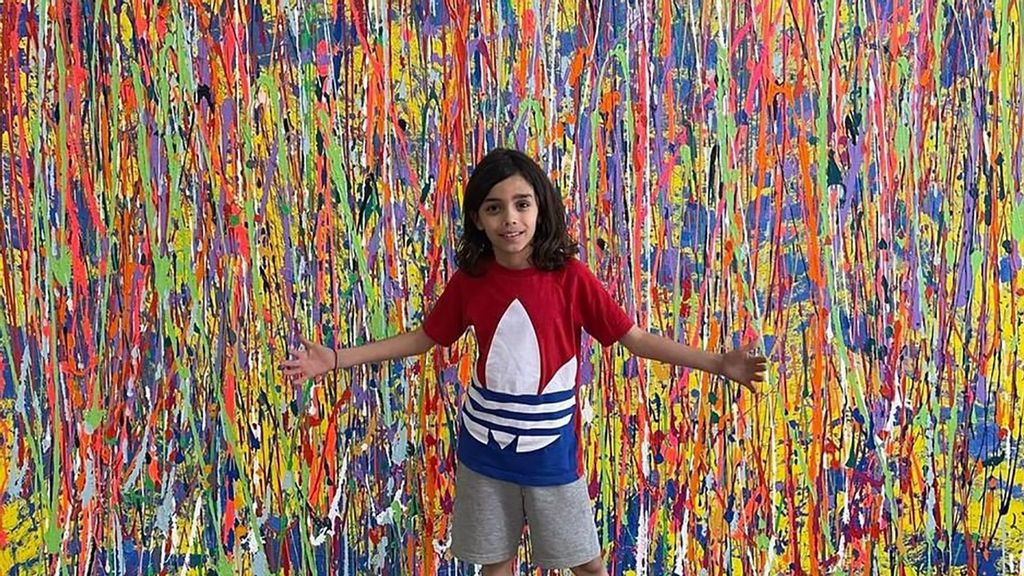 The world’s youngest abstract artist – aged just nine – has just sold an artwork for a cool $25,000.

The large works of little Mikail Akar of Cologne, Germany, were recently on exhibition at the prestigious ArtMuc art fair in Munich.

Mikail describes himself as “the world’s youngest abstract artist”. He names his biggest inspiration as the renowned American abstract expressionist painter Jackson Pollock (1912-1956).

The young lad, who has Turkish roots, told German media: “But I’m also a big fan of Gerhard Richter and Jean-Michel Basquiat.”

Mikail was in Munich to see his works on show until Sunday, 15th May. He had to return home with his dad Kerem, 41, that evening, as he had school the next day.

Kerem said of his son’s meteoric rise to stardom: “He started finger painting when he was four and that’s how it developed.

“Back then, we teamed up with an artist agency and in 2017 Mikail had his first sold-out exhibition.”

In addition to his love of painting, Mikail said: “I like boxing, swimming, cycling and I like to play the saxophone.”

Despite his tender age, the young artist can already boast 21 completed exhibitions. He said (last week): “I was in New York two weeks ago with my pictures.”

Mikail has had his own 160-square-metre studio near the famed Cologne Cathedral – a UNESCO World Heritage site – for five months now.

There he plans to create more giant paintings, which are set to go on show in Los Angeles, Hong Kong and Tokyo next year.

In a recent interview with The Related Life about his creative process, he said: “Sometimes I know what I’m going to create, and sometimes I don’t.

As his reputation within international art circles grows it has led to a new partnership with the NFT network Element.Black.

Mikail may be an intuitive creative force, but don’t put him in an artist box. He is an avid soccer player and also enjoys music, and is currently playing the saxophone.